Kleve
This article is about the North Rhine-Westphalia town. For other uses, see Kleve (disambiguation).
"Cleves" redirects here. For the duchy, see Duchy of Cleves. For Jülich-Cleves-Berg, see United Duchies of Jülich-Cleves-Berg.

Kleve (historically known in English as Cleves, Clèves in French and Kleef in Dutch), is a town in the Lower Rhine region of northwestern Germany near the Dutch border and the River Rhine. From the 11th century onwards, Kleve was capital of a county and later a duchy. Today, Kleve is the capital of the district of Kleve in the German state of North Rhine-Westphalia.

Division of the town 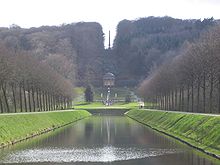 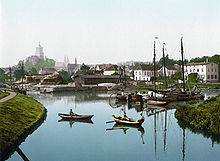 The name Kleve probably derives from the word cliff (German "Kliff"), referring to the promontory upon which the Schwanenburg was constructed. However, the city's coat of arms displays three clovers, (German "Klee") which is comparable to the pronunciation of Kleve in the Low Rhenish dialect and in Dutch, "Kleef". Interestingly, Kleve was spelled with a "c" throughout its history until spelling reforms introduced in the 1930s required that the name be spelled with a "k". As of 2008, the CDU announced ambitions to return the name to its original spelling.

The Schwanenburg (English: Swan Castle), where the dukes of Cleves resided, was founded on a steep hill. It is located at the northern terminus of the Kermisdahl where it joins with the Spoykanal, which was previously an important transportation link to the Rhine. The old castle has a massive tower, the Schwanenturm 180 feet (55 m) high, that is associated in legend with the Knight of the Swan, immortalized in Richard Wagner's Lohengrin.

Medieval Kleve grew together from four parts — the Castle Schwanenburg, the village below the castle, the first city of Kleve on the Heideberg Hill, and the Neustadt ("New City") from the 14th century. In 1242 Kleve received city rights. The Duchy of Cleves, which roughly covered today's districts of Kleve, Wesel and Duisburg, was united with the Duchy of Mark in 1368, was made a duchy itself in 1417, and then united with the neighboring duchies of Jülich and Berg in 1521, when John III, Duke of Cleves, married Mary, the heiress of Jülich-Berg-Ravenburg.

Kleve's most famous native is Anne of Cleves (1515-1557), daughter of John III, Duke of Cleves and (briefly) wife of Henry VIII of England. Several local businesses are named after her, including the Anne von Kleve Galerie.

The local line became extinct in the male line in 1609, leading to a succession crisis in the duchies. After the Thirty Years War, in 1648, the succession dispute was finally resolved with Cleves passing to the elector of Brandenburg, thus becoming an exclave of the territory of Prussia.

During the Thirty Years War the city had been under the control of the Dutch Republic, which in 1647 had given Johann Moritz von Nassau-Siegen administrative control over the city. He approved a renovation of the Schwanenburg in the baroque style and commissioned the construction of extensive gardens that greatly influenced European landscape design of the 17th century. Significant amounts of his original plan for Kleve were put into effect and have been maintained to the present, a particularly well-loved example of which is the Forstgarten.

The mineral waters of Kleve and the wooded parkland surrounding it made it a fashionable spa in the 19th century. At this time, Kleve was named "Bad Cleve" (English "baths of cleves"). Kleve has long since lost its reputation as a fashionable getaway, though tourism remains a significant factor in the local economy.

Kleve suffered heavy bombing during the Second World War, with over 90% of buildings in the city severely damaged. As a result, relatively little of the pre-1945 City remains, although many historic villas built by wealthy German vacationers from the Ruhrgebiet during the heyday of Bad Kleve still stand along the B9 near the Tiergarten. Many buildings were reconstructed, however, including most the Schwanenburg and the Stiftskirche, the Catholic parish church. These landmarks, constructed on some of the highest land in the surrounding area, can be seen from many surrounding communities.

Since 1953 there has been a broadcasting facility for FM radio and television from regional broadcaster WDR near Kleve. It uses as aerial mast a 126.4 metre high guyed steel tube mast with a diameter of 1.6 metres, which is guyed 57 and 101.6 metres above ground. This mast replaced the old radio mast from the 1960s, which was used until 1993, additionally for transmissions in the medium wave range.

Important employers in the area associated with the Wirtschaftswunder after the war were the XOX Bisquitfabrik (XOX Cookie Factory) GmbH and the Van den Berg'schen Margerinewerke (Margarine Union), that manufactured cookies and margarine. Another important employer was the Elefanten-Kinderschuhfabrik (Elefant Children's Shoes Factory). All of these businesses have since closed. Retail has become an increasingly important industry, particularly after the institution of the Euro. Local retailers are often visited by Dutch drawn by significantly lower prices. 1 out of every 2 Euros spent in Kleve originate from The Netherlands. Many Dutch citizens also own homes in the area, attracted by significantly lower real estate prices. Sizeable Dutch communities exist in the area around Kranenburg to the west of Kleve. Most of them do not work in Germany, but commute from there to Nijmegen, situated directly across the border. 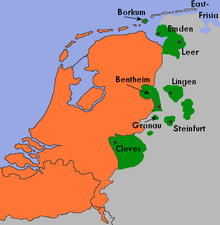 Historically, Dutch, not German, was the dominant language in the region of, and surrounding Cleves. This can still be seen today as most towns in the region have Germanized names of Dutch origin. Because of this, many historical persons (for example: Govert Flinck) from Cleves are considered Dutch, rather than Germans. Although German took over at the end of the 19th century, the Dutch influence is still notable. Even today, the traditional local dialect, Zuid Gelders, is Dutch.

Up to the middle of the 20th century many locals still spoke Low Rhenish, though today almost all people use Standard High German in daily conversation, even amongst family. Most young people in the region can only understand and not speak Low Rhenish, having heard their grandparents speak it. The dialect is likely doomed to extinction.

Kleve is twinned with