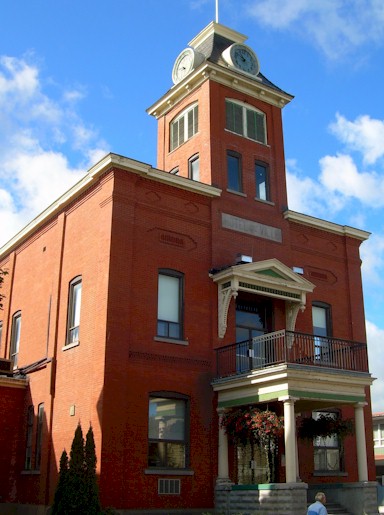 Farnham is a town located in the province of , Canada. It is part of the Brome-Missisquoi , in the administrative region of . It is the second most populated of the RCM.

Built on the shores of the , at the border of the lowlands, the city of Farnham is located in the center of important cities such as (West) and (North-East).

The city of Farnham takes its name from the of Farnham. The latter is one of the few townships being proclaimed before 1800, and was named as such in remembrance of , UK. The first "Farnhamiens", mostly Loyalists from the , first came there in .

On th , Farnham got the status of "town". On th, , the town of Farnham and the municipality of Rainville merged together to form the new "City of Farnham". The total population is now numbered at 8,000 inhabitants.

Farnham is also the site of an important military training camp, used primarily by the and local militia.

* , photographer, was born in Farham.

* Petite Église - once an old church, the newly renovated building is now a fully functional recording studio, owned and operated by -based band . [Sean Michaels, [http://www.pastemagazine.com/action/article/4047/arcade_fire "Inside the church of Arcade Fire"] , "Paste Magazine", April 11, 2007.] Other notable bands to have recorded at Petite Église include and Hot Springs.

Located in Farnham is Canada's leading parachuting school, Nouvel Air. Farnham has an arena named in honor of Madeleine Auclair. Since the 1990s Farnham has had a [skate board park), which hosts an annual festival every August named "Skatefest de Farnham". Southeast of Farnham is the golf course "Club de Golf de Farnham".

Farnham is on the route of both the Montérégiade Farnham/Granby and Route verte bicycle paths.