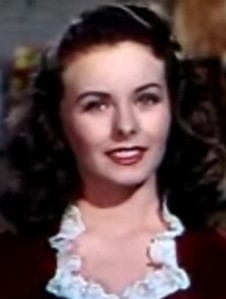 Crain was born in to George A. Crain (a school teacher) and Loretta Carr; she was of Irish heritage on her mother's side, and of English and distant French descent on her father's. She moved to Los Angeles as a young child. An excellent ice skater, Crain first attracted attention when she was crowned Miss Pan Pacific at L.A.'s . Later, while still in high school, she was asked to make a opposite . She did not get the part, but in 1943, at the age of 18, she appeared in a bit part in the movie "The Gang's All Here."

In 1944 she starred in "Home in Indiana" and "In the Meantime, Darling". Her acting was critically panned, but she rebounded in the hit "." During World War II, Crain's fan mail was second in volume only to that of Betty Grable. In 1945 she co-starred with in "State Fair," and "" with . In 1949 she starred in three films: "", "The Fan", and "Pinky", for which she was nominated for the . "Pinky" was a controversial movie, since it told the story of a light-skinned African-American young woman who passes for white in the northern United States. Although and other black actresses were considered for the role, chose to cast a white actress for box-office reasons.

While still at Fox, Crain gave an excellent performance as a young wife quickly losing her mind amidst high seas intrigue in "Dangerous Crossing", co-starring . Crain then starred in a string of pictures for , including notable pairings with , such as "Man Without a Star" (1955).

Also in 1955, Crain also showed off her lively dancing abilities in "," co-starring , , and . The production was filmed on location in Paris and Crain's singing in the film was dubbed, as was customary. The film was based on the novel that was a sequel to her acclaimed "Gentlemen Prefer Blondes". "" was popular throughout Europe at the time and was released in as "A Paris Pour les Quatre" ("To Paris For The Four"), and in as "Cevieren Te Parijs". Later in the 1950s, Crain, Russell, and another actress teamed up for a short-lived singing and dancing lounge act at one of the hotels on the .

In 1956, Crain starred opposite , , and in the compelling Western, "." The film was directed by Russell Rouse. In 1957, she was a socialite who helps a crushed singer () redeem himself in "".

In 1959, Crain appeared in a prestigious special production of "". Also starring in the broadcast were , , , and . However, top billing on the program went to co-star .

Film roles became fewer in the 1960s as Crain went into semi-retirement. Crain was captivating as in the Italian production of "Queen of the Nile" (1961) with and . During this period Crain did a stint as one of the on the popular Sunday night program. She also starred again with Dana Andrews in "" (1967). Crain's last film role was in "Skyjacked" (1972).

Against her mother's wishes, Crain married former contract player Paul Brinkman on , ; the first of their 7 children was born the following April. During the early 1950s, Crain was earning approx. $3,500 per week. Crain and her husband Brinkman bought a large, lovely home for their growing family on Roxbury Drive in Beverly Hills. (The home can be seen and is described by in candid footage of a driving sequence in the 1952 now cult-classic, "The Star".) The marriage was rocky for some years. In the mid-50s, Crain obtained an interlocutory divorce decree, each spouse claiming the other had been unfaithful (she also claimed Brinkman had been abusive), but the couple reconciled on the eve of their 11th wedding anniversary.

As a lifelong devout , Jeanne Crain Brinkman and her husband Paul remained married, though they lived separately in Santa Barbara, California, until Brinkman's death in October 2003. Crain died a few months later and it was later confirmed that the cause was a heart attack. Crain's funeral Mass was held at the Old . Crain is buried in the Brinkman family plot at Santa Barbara Cemetery. The couple outlived two of their children. The Brinkmans were survived by five adult children, including Paul Brinkman Jr., a successful television executive, most known for his work on CBS TV's "". Crain was also survived by many grandchildren, nieces, and nephews.

Crain's eldest granddaughter, actress and singer/songwriter Bret Crain, set up a website dedicated to Crain's memory: jeannecrain.org. On the website one can read about Bret's fond memories of her grandmother. Bret Crain can be seen being interviewed on the upcoming DVD release of Jeanne Crain's "Dangerous Crossing."

Crain's career is fully documented by an extraordinary collection of memorabilia about her assembled by the late Charles J. Finlay (longtime publicist at ). The Jeanne Crain collection resides perpetually at the Cinema Archives in . These archives also hold the papers of , , , and others.