:"This article is about the 1944 play and subsequent 1948 feature film. For the musical adaptation, see I Remember Mama."

"I Remember Mama" is a play by . Based on the "Mama's Bank Account" by , it focuses on a loving family of Norwegian immigrants living on Steiner Street in San Francisco in the 1910s.

Produced by and , the Broadway production opened on , at the and ran for 713 performances.

The cast included , , , and , making his Broadway debut. 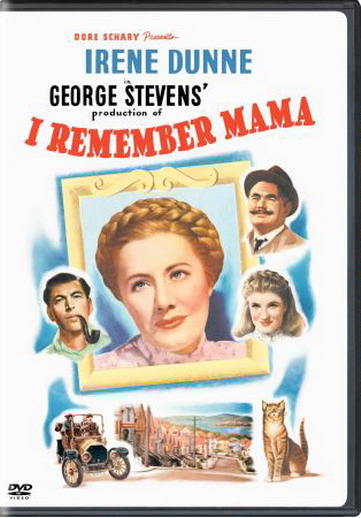 The film begins with eldest daughter Katrin completing the last lines of her autobiographical . As she reminisces about her family life, we to 1910, where the first of a series of s finds Marta Hanson preparing the weekly budget with assistance from her husband Lars, daughters Katrin, Christine and Dagmar, and son Nels, who announces his desire to attend high school. Each family member offers to make a financial sacrifice to contribute to the boy's education.

Soon after, Marta's sister Trina arrives, announces she is marrying undertaker Peter Thorkelson, and implores Marta to break the news to their sisters Sigrid and Jenny. As Trina feared, the two laugh upon hearing the news, but when Marta threatens to reveal embarrassing anecdotes about them, the women agree to accept their sister's decision.

When Jonathan Hyde, the Hansons' educated but impoverished lodger, reads "" aloud for the family, all of them, especially aspiring writer Katrin, are deeply moved by the story. Later, the family is visited by Marta's gruff and domineering but soft-hearted Uncle Chris and his Jessie Brown. When Chris discovers youngest daughter Dagmar is severely ill with , he insists on taking her to the hospital. Because they disapprove of Jessie, Sigrid and Jenny attempt to stop him, but he bullies his way past them with Dagmar and her mother following behind.

Dagmar's operation is a success, but her mother Marta is prohibited from seeing her by the hospital staff. At home, she becomes increasingly distressed about the separation from her child, whom she promised she would see as soon as she awakened, and she returns to the hospital where, disguised as a member of the housekeeping staff, she sneaks into Dagmar's ward and sings a Norwegian lullaby to her.

When a recovered Dagmar returns home, she learns her cat, Uncle Elizabeth, is very ill. Despite Dagmar's belief in her mother's powers, Marta feels helpless to save the wounded cat and sends Nels to buy some so she can put it to sleep. The following morning she is astonished when Dagmar walks in with a sleepy but very alive and apparently cured cat.

Mr. Hyde moves out, leaving a check for his long overdue rent and his entire collection of classic books. The family's joy at their financial windfall vanishes when they discover their lodger had no bank account and the check has no value. Sigrid and Jenny are furious about the man's deceit, but Marta declares his valuable gift of literature is payment enough.

Katrin brags to Christine that their mother is going to buy her the dresser set she has long admired as a graduation present. Her sister tells her Marta is planning to give her their grandmother's brooch as a gift, so Katrin is surprised when she receives the desired dresser set instead. As she is about to leave to perform in the school's production of "", Katrin is informed that her mother traded with the storekeeper her beloved for the gift Katrin wanted. Distraught by the news, the girl performs badly in the play, and later presents her mother with the brooch after trading back the dresser set.

Marta learns Uncle Chris is near death, and she takes Katrin to say goodbye to him at his ranch. He reveals he has no money to leave his niece because he had long been donating most of his income to help poor lame children, and confesses he and Jessie married years ago but kept their union a secret because of Sigrid and Jenny's attitude towards her. After enjoying a final drink with his niece and his wife, Uncle Chris dies.

Katrin is dejected when she receives her first literary rejection letter. Determined to bolster her confidence, Marta takes some of her stories to famed author and Florence Dana Moorhead and convinces her to read them in exchange for her prized meatball recipe. Marta returns home and advises her daughter that Moorhead feels the girl has talent and should write about what she knows best. Marta urges Katrin to write a story about Papa. When the girl's story is accepted for publication, she is overjoyed to be paid $500. After announcing some of the money will go towards the purchase of the winter coat Marta always has wanted, Katrin confesses her story is not about her father but is titled "Mama and the Hospital". She begins to read it to her family, and its introduction concludes with the line, "But first and foremost, I remember Mama."

George Stevens originally offered the role of Mama to , who balked at playing a motherly type. He then cast , whom he had directed in "" in 1941. Although she was 50-years-old, the actress had a youthful appearance and had to be aged with makeup to portray the family convincingly [ [http://www.tcm.com/tcmdb/title/title.jsp?stid=2237&atid=25582&category=Articles&titleName=I%20Remember%20Mama&menuName=MAIN "I Remember Mama" at Turner Classic Movies] ] .Some scenes filmed on Rhode Island Street, San Francisco, California.The film premiered as the attraction at in .

In his review in the "", said the film "should prove irresistible" and added, "Irene Dunne does a beautiful job . . . handling with equal facility an accent and a troubled look, [she] has the strength and vitality, yet the softness, that the role requires." [ [http://movies.nytimes.com/movie/review?res=9C06E3D9173FE23BBC4A52DFB5668383659EDE "New York Times" review] ]

calls it a "warm-hearted film" and adds, "Stevens directs without fuss or undue sentimentality and keeps the inevitable talkativeness at bay." [ [http://www.channel4.com/film/reviews/film.jsp?id=104470 Channel 4 review] ]

The film was named one of the year's Ten Best by "".

A musical stage adaptation starring had a brief run on Broadway in 1979.