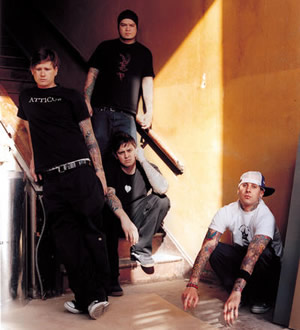 Box Car Racer was a side-project from two members of the band , featuring guitarist
and drummer . DeLonge formed Box Car Racer to experiment with and record ideas he felt were not "Blink-friendly", along with Travis Barker. David Kennedy from completed the trio and an eponymous album was ready to be recorded. Tom was insistent on a bass player, so he hired who was Kennedy's friend. Guests on the album included from Blink-182 on the song "Elevator", and from Rancid and from on "Cat Like Thief".

DeLonge and Barker claim the group was heavily influenced by Dischord emo, citing influences such as , and later era post hardcore bands such as Quicksand.

Box Car Racer took a hiatus after their headlining tour in 2003. DeLonge has stated publicly that the project has served its purpose, and is now permanently defunct.

The band's name comes from the Bomber which dropped the second wartime on Nagasaki, Japan. The plane's name was "". Tom has said in an interview that he had seen the name misspelled as "Boxcar", and thusly, dubbed the band under that name for their music and lyrics pertaining heavily to love and war. He wanted the band to also have a three word name, another reason for the name "Box Car Racer".