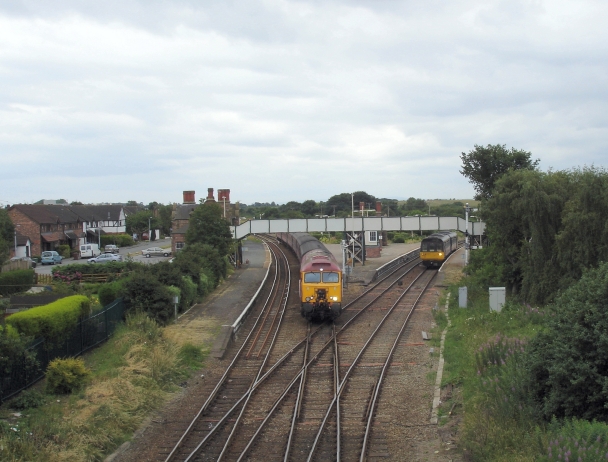 Helsby railway station serves the village of in . It is a Grade II .

The North Cheshire Rail Users Group has adopted this station and regularly ensure the station is clean and tidy. The station has won the "Best Kept Station [ [http://www.bestkeptstation.org/helsby.htm Stations ] ] " six times, and the plaques commending this are fixed to the signal box located on the island platforms, (2 + 3).

There is no disabled access to this trains calling at this station due to the low platforms. All platforms can be reached via a ramp down and over the tracks at the opposite end of the station from the bridge. [ [http://www.nationalrail.co.uk/stations/hsb/details.html#Accessibility National Rail Enquiries - Station Facilities for Helsby ] ]

The station is on the between and Chester. It is operated by , but is unstaffed [ [http://www.nationalrail.co.uk/stations/hsb/details.html#Staffing National Rail Enquiries - Station Facilities for Helsby ] ] requiring passengers to purchase tickets on board the train of the conductor. The nearest station with additional ticketing facilities is . Penalty Fares do not operate here.

Trains generally run in either direction hourly. Many trains towards Chester continue to North Wales destinations, mainly Llandudno (although there are also two trains to Holyhead to connect with the ferry to Dublin).

The station is also the junction of the branch line to Ellesmere Port. This service sees four trains daily in each direction, (Monday - Saturday) - two in the early morning and another pair mid-afternoon. One of these trains continues to via . operate this service. (In the picture, the train on the right has arrived from ). There is no Sunday service on this line.

The Summer Saturday, Chester - Runcorn via the service, operated by Northern passes through Platform 2, however it does not stop, except to do so at the signal.

As the track surrounding Helsby is not electrified, only diesel propelled engines can operate here. Arriva Trains Wales usually operates and DMU trains.

Most freight from the North operates through Helsby usually when heading towards North Wales, and would therefore pass through Chester.

Helsby has several bus links operated primarily by and .

On Sundays, service 21 is operated on behalf of Cheshire County Council by Halton Buses.