McIntosh (apple)
Not to be confused with Macintosh.

The McIntosh Red (or McIntosh; colloquially, the Mac) is an apple cultivar with red and green skin, a tart flavor, and tender white flesh. It ripens in late September. It is traditionally the most popular cultivar in Eastern Canada and New England, well known for the pink applesauce unpeeled McIntoshes make. It is also well-suited for cider and pies. It is common to find this cultivar packed in children's lunches in North America owing to its small to medium size and longstanding reputation as a healthy snack.[original research?]

Every McIntosh apple has a direct lineage to a single tree discovered in 1811 by John McIntosh on his farm in Dundela, a hamlet near Morrisburg, in Dundas County, Ontario, Canada. He discovered the tree as one of 20 apple seedlings while clearing the farm, which he had just purchased. He transplanted the seedlings, cultivated them, and only one of them was still alive by 1830. The surviving apple tree lived until 1906. The oldest surviving descendant also died on the 25th July, 2011. 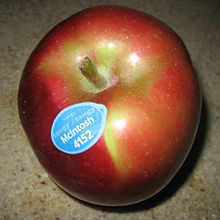 A McIntosh as bought, showing colouring

The Snow Apple, also known as the Fameuse, is believed to be a parent of the McIntosh. Offsprings of the Mac include, among many others, the firmer Macoun (a Jersey Black cross), the Spartan (recorded as a Newtown Pippin cross), the Cortland, the Empire, the Jonamac, the Jersey Mac and possibly the Paula Red.

William Tyrrell Macoun of the Central Experimental Farm in Ottawa is credited with popularizing this variety of apple in Canada.