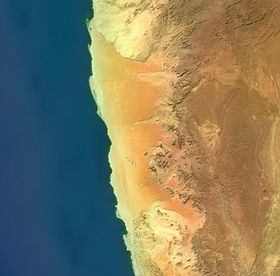 Satellite view of the Namib Desert

The Namib Desert is a desert in Namibia and southwest Angola that forms part of the Namib-Naukluft National Park, the largest game reserve in Africa. The name "Namib" is of Nama origin and means "vast place". Having endured arid or semi-arid conditions for at least 55 million years,[1] it is considered to be the oldest desert in the world. 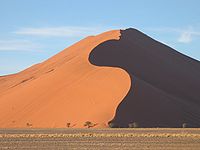 The Moon Valley in central Namib

The Namib Desert is one of the 500 distinct physiographic provinces of the South African Platform physiographic division. It occupies an area of around 80,950 km²[2] (31,200 square miles), stretching from the Usiab River (north) to the town of Lüderitz (south) and from the Atlantic Ocean (west) to the Namib Escarpment (east). It is about 1,000 miles (1,600 km) long from north to south and its east-west width varies from 30 to 100 miles (50–160 km). To the north, the desert leads into the Kaokoveld; the dividing line between these two regions is roughly at the latitude of the city of Walvis Bay, and it consists in a narrow strip of land (about 50 km wide) that is the driest place in Southern Africa. To the south, the Namib borders on the South African Karoo semi-desert.

Southern Namib (between Lüderitz and the Kuiseb River) comprises a vast dune sea with some of the tallest and most spectactular dunes of the world, ranging in color from pink to vivid orange. In the Sossusvlei area, several dunes exceed 300 meters (984 ft) in height. The complexity and regularity of dune patterns in its dune sea have attracted the attention of geologists for decades, but it remains poorly understood.

Moving north from Sossusvlei, the sand gradually gives way to a rocky desert that extends all the way from Sossusvlei to the Swakop river. This area is traversed by the Tropic of Capricorn and it's mostly flat, although some scenic canyons and elevations are found in some areas, for example in the Moon Valley system. While most of the soil is rocky, sand dunes are still occasionally found in this region; for example, sand dunes occupy much of the coastline between Walvis Bay and Swakopmund.

The Namib desert is an important location for the mining of tungsten, salt and diamonds.

The Namib's aridity is caused by the descent of dry air of the Hadley Cell, cooled by the cold Benguela current along the coast. It has less than 10 mm (0.4 inches) of rain annually and is almost completely barren. Besides rain being scarce, it is also hardly predictable. The western Namib gets less rain (5 mm) than the eastern Namib (85 mm). This is due to several factors. Winds coming from the Indian Ocean lose part of their humidity when passing the Drakensberg mountains, and are essentially dry when they reach the Namib Escarpment at the eastern end of the desert. Winds coming from the Atlantic Ocean, on the other hand, are pressed down by hot air from the east; their humidity thus forms clouds and fog. Morning fogs coming from the ocean and pushing inwards into the desert are a regular phenomenon along the coast, and much of the life cycle of animals and plants in the Namib relies on these fogs as the main source of water.

The dry climate of the Namib reflects the almost complete lack of bodies of water on the surface. Most rivers flow underground and/or are dry for most of the year, and even when they are not, they usually drain into endorheic basins, without reaching the sea. The Swakop and the Omaruru and the only rivers that occasionally drain into the ocean.

All along the coast, but mostly in the northmost part of it, interaction between the water-laden air coming from the sea via southerly winds, some of the strongest of any coastal desert, and the dry air of the desert causes immense fogs and strong currents. It causes sailors to lose their way; this is testified by the remnants of a number of shipwrecks that can be found along the Skeleton Coast, in northern Namib. Some of these wrecked ships can be found as much as 50 metres (55 yds) inland, as the desert slowly moves westwards into the sea, reclaiming land over a period of many years.

Gemsboks (Oryx gazella) are the biggest antelopes found in the Namib

A number of unusual species of plants and animals are found in this desert, many of which are endemic and highly adapted to the specific climate of the area. One of the most well-known endemic plants of the Namib is the bizarre Welwitschia mirabilis; a shrub-like plant, it grows two long strap-shaped leaves continuously throughout its lifetime. These leaves may be several meters long, gnarled and twisted from the desert winds. The taproot of the plant develops into a flat, concave disc in age. Welwitschia is notable for its survival in the extremely arid conditions in the Namib, mostly deriving moisture from the coastal sea fogs. An area where Welwitschias are a common sight is found in the surroundings of the Moon Valley, including the eponymous Welwitschia Plains.

The Namib fauna mostly comprises arthropods and other small animals that can live on little water, but a few species of bigger animals are also found, including antelopes and gazelles (such as oryxes and springboks), ostrichs, and in some areas even desert elephants. All these species have developed techniques to survive in the Namib environment. A number of endemic darkling beetles species- such as the Namib Desert beetle- have bumpy elytrons with a pattern of hydrophilic bumps and hydrophobic troughs. These cause humidity from the morning fogs to condensate into droplets, which roll down the beetle's back to its mouth; they are collectively known as "fog beetles". Another beetle, the Lepidochora discoidalis, builds "water-capturing" webs. Black-backed jackals lick humidity from stones. Gemsboks (also known as Oryxes) can raise the temperature of their bodies to 40 °C in the hottest hours of the day. The desert is also home to meerkats and several species of lizards.

Although the desert is largely unpopulated and inaccessible, there are year-round settlements at Sesriem, close to the famous Sossusvlei area, and other small outposts in other locations. Namibe in Angola, and Lüderitz, Walvis Bay and Swakopmund in Namibia, bordering on the desert, are the main settlements in the area.

The Namib-Naukluft National Park, that extends over a large part of the Namib Desert, is the largest game reserve in Africa and one of the largest of the world. While most of the park is hardly accessible, several well-known visitor attractions are found in the desert. The prominent attraction is the famous Sossusvlei area, where high orange sand dunes surround vivid white salt pans, creating a fascinating landscape.

Access to the park is either by gravel roads or dust roads (except for 60 km of concrete road from the Sesriem gate to Sossusvlei) or by light aircraft from Windhoek (the capital of Namibia, about 480 km (300 mi) north-east of the centre of the desert), or Swakopmund and Walvis Bay at the north end of the desert.

Panoramic of the Namib Desert in the area of Spitzkoppe