Mount Saint Vincent University is a university located in Halifax, Nova Scotia, Canada. It was established in 1873 and is locally referred to as The Mount. 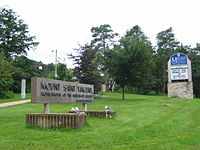 Established by the Sisters of Charity of Saint Vincent de Paul in 1873, the Mount was one of the only institutions of higher education for women in Canada at a time when women could not vote. The original purpose of the academy was to train novices and young sisters as teachers, but the Sisters also recognized a need to educate other young women. [2] Over the ensuing years, the order developed a convent, schools, an orphanage, and health care facilities throughout the Halifax area, as well as across North America.

By 1912, the Sisters of Charity of Saint Vincent de Paul recognized the need to offer greater opportunity through university education and adopted a progressive plan to establish a college for young women. It was two years later, in 1914 that the Sisters partnered with Dalhousie University, enabling Mount Saint Vincent to offer the first two years of a bachelor’s degree program to be credited toward a Dalhousie degree.

In 1925, the Nova Scotia Legislature awarded the Mount the right to grant its own degrees, making it the only independent women’s college in the British Commonwealth. [4] By 1951, degrees were offered in Arts, Secretarial Science, Music, Home Economics, Library Science, Nursing and Education.

A new charter was granted in 1966 and the College became Mount Saint Vincent University, bringing forth the establishment of a Board of Governors and Senate. This was also a period of tremendous growth – with enrolment increases, new construction and new agreements. In 1967 the Mount began admitting men as students. The University continued to evolve with the expansion of programs during the 1970s and entered into several new fields, including Child Study, Public Relations, Gerontology, Tourism and Hospitality Management, Cooperative Education and Distance Education. In July 1988, the Sisters of Charity of Saint Vincent de Paul officially transferred ownership of the institution to the Board of Governors.

Mount Saint Vincent University offers 38 undergraduate degrees in liberal arts and sciences and an array of professional programs including Applied Human Nutrition, Business Administration, Child and Youth Study, Public Relations, and Tourism and Hospitality Management. Following consolidation of post-secondary programs across Nova Scotia in the 1990s, the Mount became home to the only Education program in the Halifax area.

Academic programs are supported by a wide variety of electronic and print research resources in the MSVU Library.[6] Research services include drop-in reference assistance, research appointments and classroom workshops.

Mount Saint Vincent University is also home to the Centre for Women in Business , a not-for-profit university business development centre (UBDC), dedicated to assisting with entrepreneurial activities both within the university and throughout Nova Scotia.

Founded in 1992 by the University's Department of Business & Tourism, this remains the only UBDC in Canada with a primary focus on women. The Centre served more than 7500 clients over the past 18 years.

Located on campus, the Centre is a well-utilized resource offering practical, results-oriented programs and services including business advice, training and networking opportunities. Business management training, one-to-one business advice, networking and a membership program are among the opportunities the Centre offers to develop and support women-owned enterprises. The Centre’s membership program has 300+ members.

Home to the Mystics, the Mount competes in the Atlantic Colleges Athletic Association (ACAA) in Women’s and Men’s Basketball, Soccer and Women’s Volleyball. The Mystics hold a number of regional championship titles in all sports. Both the Men’s and Women’s Basketball teams were undefeated for two straight years in regular season play (2006-07, 2007-08) and went on to capture silver at the national championships in 2007-08.