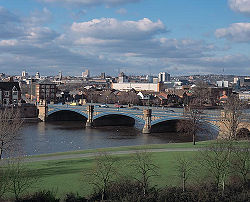 Looking towards the city centre from Victoria Embankment. 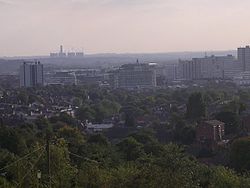 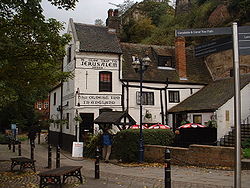 The centre of the city is usually defined as the Old Market Square - the UK's largest city square. A major redevelopment of the Old Market Square was completed in March 2007. Many of the main shopping streets are based around the square, which is dominated by Nottingham's city hall. The building's landmark dome may be seen for miles around. Much of the ground floor of the building houses the Exchange Arcade, a boutique shopping centre.

A Bohemian quarter of the city known as Hockley has arisen in recent years, situated close to the Lace Market area.

Nottingham city centre has been voted 5th in Experian's list of the top 15 UK retail areas.[1]

The city centre's fashion core is centred around Bridlesmith Gate, which is home to upmarket names such as Kurt Geiger, Ted Baker and Diesel. Sir Paul Smith's flagship store is located on Middle Pavement, and Hugo Boss is located on St. Peter's Gate. London-based Harvey Nichols have plans to open a Nottingham branch in 2012/2013.

Nottingham city centre is split into five "zones" which were introduced with the Nottingham Parksmart scheme in 2009 to signpost visitors to parking facilities and tourist attractions. The zones are:

Nottingham Castle is a popular attraction for visitors to the city due to its links with Robin Hood. The Brewhouse Yard Museum (Museum of Nottingham Life) and the Museum of Costume and Textiles are close by.

Part of Nottingham's vastly expansive cave network is open to the public through the City of Caves attraction, and the Galleries of Justice on High Pavement were once a fully functioning Victorian courtroom.

Notable churches within the city centre include the Roman Catholic Nottingham Cathedral, and the medieval St. Mary's Church at the heart of the Lace Market.

The National Ice Centre (adjoined to Capital FM Arena Nottingham) is located close to the city's Lace Market quarter and is the first twin Olympic ice-pad facility in the UK. It is the home of the Nottingham Panthers, a professional ice-hockey team.

Rock City is a mid-sized music venue that draws many popular bands from across the world, and so is an important part of Nottingham's music tourism scene.

Nottingham is home to a wide variety of entertainment venues, the largest of which is the 10,000-seater Capital FM Arena (part of the National Ice Centre), where many big-name acts perform regularly.[2]

The city's major producing theatre, the Nottingham Playhouse, has built up a national reputation for its exciting, innovative and contemporary new works.

The Nottingham Royal Centre incorporates the 2,500-seater Royal Concert Hall and the Victorian Theatre Royal. The Royal Concert Hall is the region's top venue for classical music and regularly plays host to world-class orchestras and ballets, while the Theatre Royal is considered one of the finest venues in the country for major touring West End musicals and plays.

The Corner House entertainment complex houses a multi-screen Cineworld cinema and a multitude of continental pavement-cafes and restaurants.

Eastside City is the name of the redevelopment project that is set to transform an extensive former industrial brownfield area to the east of Nottingham city centre's historic core. This area stretches from the Nottingham-Beeston Canal in the south towards the National Ice Centre.[3] At the heart of the regeneration zone will be The Island site which will be totally overhauled to become a thriving city quarter with public open spaces, restaurants and bars and a new park for the city's inhabitants. The development will consist of new homes, offices and retail units.[4]