/ɨˈfɛdrɪn/ or /ˈɛfɨdriːn/; not to be confused with ephedrone) is a sympathomimetic amine commonly used as a stimulant, appetite suppressant, concentration aid, decongestant, and to treat hypotension associated with anaesthesia.

Ephedrine is similar in structure to the (semi-synthetic) derivatives amphetamine and methamphetamine. Chemically, it is an alkaloid derived from various plants in the genus Ephedra (family Ephedraceae). It works mainly by increasing the activity of noradrenaline on adrenergic receptors.[1] It is most usually marketed in the hydrochloride and sulfate forms.

In traditional Chinese medicines, the herb má huáng (麻黄, Ephedra sinica) contains ephedrine and pseudoephedrine as its principal active constituents. The same is true of other herbal products containing extracts from Ephedra species.

Nagayoshi Nagai, a Japanese chemist, was the first person to isolate ephedrine from Ephedra distachya (syn. Ephedra vulgaris) in 1885. 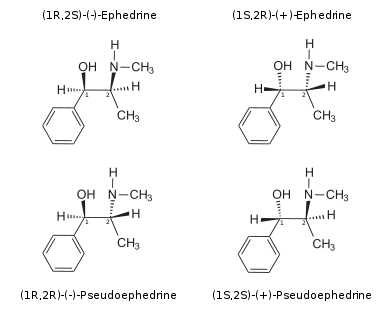 The four stereoisomers of ephedrine.

In the outdated d/l system (+)-Ephedrine is also referred to as l-Ephedrine and (—)-Ephedrine as d-Ephedrine (in the Fisher projection then the phenylring is drawn at bottom).[2][4]

The IUPAC names of the two enantiomers are (1R,2S)- respectively (1S,2R)-2-methylamino-1-phenylpropan-1-ol. A synonym is erythro-Ephedrine.

Most of the L-ephedrine produced today for official medical use is made synthetically as the extraction and isolation process from Herba Ephedra is tedious and no longer cost effective.[6]

Ephedrine is a sympathomimetic amine. The principal mechanism of its action relies on its indirect stimulation of the adrenergic receptor system, which is part of the sympathetic nervous system (SNS), by increasing the activity of noradrenaline at the post-synaptic α- and β-receptors.[1] The presence of direct interactions with α-receptors is unlikely, but still controversial.[7][8][9] L-Ephedrine, and particularly its stereoisomer norpseudoephedrine (which is also present in Catha edulis) has indirect sympathomimetic effects and due to its ability to cross the blood brain barrier, it is a CNS stimulant similar to amphetamines but less pronounced, as it releases noradrenaline and dopamine in the substantia nigra.[10]

The presence of an N-methyl group decreases binding affinities at α-receptors, compared with norephedrine. On the other hand ephedrine binds better than steric orientation of the hydroxyl group is important for receptor binding and functional activity.[7] 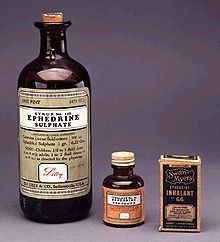 In traditional Chinese medicine, ephedrine has been used in the treatment of asthma and bronchitis for centuries.[11]

Ephedrine promotes weight loss, specifically fat loss in humans and mice. In mice it is known to stimulate thermogenesis in the brown adipose tissue, however because adult humans have only small amounts of brown fat it is assumed that thermogenesis takes place mostly in the skeletal muscle. Ephedrine also decreases gastric emptying. Methylxanthines like caffeine and theophylline have a synergistic effect with ephedrine with respect to weight loss, and so does aspirin. This led to creation and marketing of compound products.[12] One of them is known as the ECA stack, containing caffeine and aspirin besides ephedrine and is a popular supplement taken by body builders to cut down body fat before a competition.[citation needed]

For many years, the US Coast Guard recommended ephedrine together with an equal 25 mg dose of promethazine to its sailors to combat seasickness. Promethazine manages nausea and ephedrine fights the ensuing drowsiness. Commonly referred to as the Coast Guard cocktail, ephedrine may still be available for prescription for this purpose.[citation needed]

The neurotoxicity of l-Ephedrine is disputed. [14]

Ephedrine should not be used in conjunction with certain antidepressants, namely SNRIs (serotonin-norepinephrine re-uptake inhibitors), as this increases the risk of the above symptoms due to excessive serum levels of norepinephrine.

Bupropion is an example of an antidepressant with an amphetamine-like structure similar to ephedrine, and it is known as an NDRI (norepinephrine-dopamine re-uptake inhibitor). It has an action which bears more resemblance to amphetamine than to fluoxetine in that its primary mode of therapeutic action involves norepinephrine and to a lesser degree dopamine, but it also releases some serotonin from presynaptic clefts. It should not be used with ephedrine as it may increase the likelihood of the above side effects.

Ephedrine should not be used at any time during pregnancy unless specifically indicated by a qualified physician and only when other options are unavailable.[15]

Recreational and illicit use 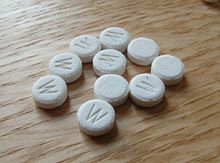 Anecdotal reports have suggested that ephedrine helps studying, thinking, or concentrating to a greater extent than caffeine. Some students and some white-collar workers have used ephedrine (or Ephedra-containing herbal supplements) for this purpose, as well as some professional athletes and weightlifters. It is common for many athletes to use stimulants while exercising. Such use of ephedrine has been associated with stimulant dependence, as well as deaths from heatstroke in athletes and circulatory problems such as aortic aneurysm in weightlifters, though these side effects are rare.

In E for Ecstasy[16] (a book examining the uses of the drug MDMA in the UK) the writer, activist and Ecstasy advocate Nicholas Saunders highlighted test results showing that certain consignments of the drug also contained ephedrine. Consignments of Ecstasy known as "Strawberry" contained what Saunders described as a "potentially dangerous combination of ketamine, ephedrine and selegiline," as did a consignment of "Sitting Duck" Ecstasy tablets.[17]

Through oxidation, ephedrine can be easily synthesized into methcathinone. Ephedrine is listed as a Table I precursor under the United Nations Convention Against Illicit Traffic in Narcotic Drugs and Psychotropic Substances.[18]

Ephedrine may be quantitated in blood, plasma or urine to monitor possible abuse by athletes, confirm a diagnosis of poisoning or assist in a medicolegal death investigation. Many commercial immunoassay screening tests directed at the amphetamines cross-react appreciably with ephedrine, but chromatographic techniques can easily distinguish ephedrine from other phenethylamine derivatives. Blood or plasma ephedrine concentrations are typically in the 20-200 µg/L range in persons taking the drug therapeutically, 300-3000 µg/L in abusers or poisoned patients and 3–20 mg/L in cases of acute fatal overdosage. The current WADA limit for ephedrine in an athlete's urine is 10 µg/L.[19][20][21]

Ephedrine is sold as an oral nasal decongestant in 8 mg pills, OTC.

Ephedrine distribution is controlled by the government, and pharmacists may refuse to sell it to customers without a prescription.

In 1997, the FDA proposed a regulation on ephedra (the herb from which ephedrine is obtained), which limited an ephedra dose to 8 mg (of active ephedrine) with no more than 24 mg per day.[22] This proposed rule was withdrawn in part in 2000 because of "concerns regarding the agency's basis for proposing a certain dietary ingredient level and a duration of use limit for these products."[23] In 2004, the FDA created a ban on ephedrine alkaloids that are marketed for reasons other than asthma, colds, allergies, other disease, or traditional Asian use.[24] On April 14, 2005, the U.S. District Court for the District of Utah ruled that the FDA did not have proper evidence that low dosages of ephedrine alkaloids are actually unsafe,[2] but on August 17, 2006, the U.S. Court of Appeals for the Tenth Circuit in Denver upheld the FDA's final rule declaring all dietary supplements containing ephedrine alkaloids adulterated, and therefore illegal for marketing in the United States. [3] Furthermore, ephedrine is banned by NCAA, MLB, NFL, and PGA TOUR [25] Ephedrine is, however, still legal in many applications outside of dietary supplements. However, purchasing is currently limited and monitored, with specifics varying from state to state.

The House passed the Combat Methamphetamine Epidemic Act of 2005 as an amendment to the renewal of the USA PATRIOT Act. Signed into law by president George W. Bush on March 6, 2006, the act amended the US Code (21 USC 830) concerning the sale of ephedrine-containing products. The federal statute included the following requirements for merchants who sell these products:

The law gives similar regulations to mail-order purchases, except the monthly sales limit is only 7.5 grams.

As a pure herb or tea, má huáng, containing ephedrine, is still sold legally in the USA. The law restricts/prohibits its being sold as a dietary supplement(pill) or as an ingredient/additive to other products, like diet pills.

In the UK ephedrine is regulated as a P medicine: it may only be lawfully supplied within a registered pharmacy and while a pharmacist is present. It is not a currently Controlled Drug under the Misuse of Drugs Act.

In South Africa ephedrine was rescheduled to Schedule 6 on 27 May 2008,[26] which makes the substance legal to possess but available via a prescription only.

Ephedrine, L-erythro-1-phenyl-2-methylaminopropanol-1, is synthesized from benzaldehyde in a few different ways. According to the first, benzaldehyde is condensed with nitroethane, giving 2-methyl-2-nitro-1-phenylethanol, which is reduced to 2-methyl-2-amino-1-phenylethanol. The necessary L-isomer is isolated from the mixture of isomers by crystallization. Methylation of this gives ephedrine.

The second method consists of the fermentation of glucose by yeast carboligase in the presence of benzaldehyde, which during the process turns into (–)-1-phenyl-2-ketopropanol. This is reduced by hydrogen in the presence of methylamine, to give the desired ephedrine.