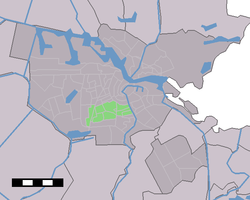 The neighborhood was built at the end of the 19th century.

Popular tourist and cultural destinations are located in the borough of Oud-Zuid, including: