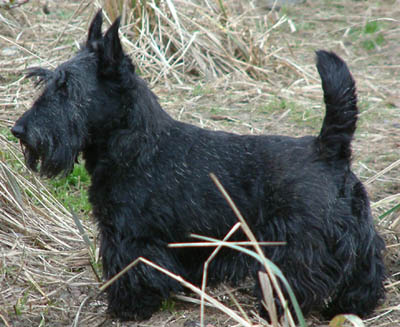 The Scottish Terrier (also known as the Aberdeen Terrier), popularly called the Scottie, is a breed of best known for its distinctive profile, black color, and typical terrier personality.

The Scottish Terrier is one of five breeds of terrier that originated in . The other four are Skye, Cairn, , and s. Its nickname is "little diehard", given to it in the 19th century by George, the fourth .

A Scottish Terrier is a small but resilient . Scotties are fast and have a muscular body and neck (a typical neck circumference is 14 inches),

The Scottie should have large paws adapted for digging. Erect ears and tail are salient features of the breed. Their eyes are small, bright and -shaped and dark brown or nearly black in colour.

The Scottie typically has a hard, wiry, long, weather-resistant outer coat and a soft dense under coat. The coat is typically trimmed and blended, with a longer coat on the beard, eyebrows, legs and lower body — traditionally shaggy-to-the-ground. The head, ears, tail and back are traditionally trimmed short.

The usual coat color ranges from dark gray to jet black. Scotties with 'Wheaten' (straw to nearly white) or '' (mix of black and brown) coats sometimes occur, but should not be confused with the or .

Scotties, like most terriers, are alert, quick and feisty — perhaps even more so than other terrier breeds.

The Scottish Terrier makes a good watchdog due to its tendency to bark only when necessary and because it is typically reserved with strangers — although this is not always the case and it is important to remember that all dogs differ. It is a fearless breed that may be aggressive around other dogs unless introduced at an early age.

Scottish Terriers were originally bred to hunt and fight s. Therefore, the Scottie is prone to dig as well as chase small , such as s, s, and es. For this reason it is recommended that they are walked on a leash.

Scottish Terriers have a greater chance of developing some s than other purebreds. According to research by the Veterinary Medical Data Program (1986), six cancers that Scotties appeared to be more at risk for (when compared to other breeds) are: (in descending order) and other s of the lower urinary tract; ; ; of the skin; lymphosarcoma and nasal carcinoma.

The most common and effective form of treatment for TCC is Piroxicam, a non-steroidal anti-inflammatory drug that "allows the cancer cells to kill themselves." In order to help prevent cancer in a dog, an owner should ensure that their dog has minimal exposure to s, s, s and smoke; use caution when treating dogs with some medications; provide a healthy, -rich diet (low in s, high in s) and plenty of exercise.

Two other genetic health concerns in the breed are (vWD) and (CMO); Scottie cramp, and are also sometimes seen in this breed. Scottish Terrier owners are advised to have tests performed to screen for von Willebrand's disease. Scotties typically live between 11 and 13 years. [Coile, Caroline, Ph. D., "Encyclopedia of Dog Breeds", Barron's Educational Series, 2002. Page 198.]

The Scottie is often thought to be the oldest of the Highland terriers, although this contention has not been proved.

The actual origin of a breed as old as the Scottish Terrier is somewhat obscure and undocumented.

Many dog writers from the early 1800s on seem to agree that there were two varieties of terrier existing in Britain at the time — a rough haired Scotch Terrier and a smooth haired English Terrier. Thomas Brown, in his "Biological Sketches and Authentic Anecdotes of Dogs" (1829), states that "the Scotch terrier is certainly the purest in point of breed and the (smooth) English seems to have been produced by a cross from him". Brown went on to describe the Scotch Terrier as "low in stature, with a strong muscular body, short stout legs, a head large in proportion to the body" and was "generally of a sandy colour or black" with a "long, matted and hard" coat. Although the Scotch Terrier described here is more generic than specific to a breed, it asserts the existence of a small, hard, rough-coated terrier developed for hunting small game in the Scottish Highlands in the early 1800s; a description that shares essential characteristics with what was once known as the Aberdeen Terrier and is today known as the Scottish Terrier. In addition the paintings of and an 1835 lithograph, entitled "Scottish Terriers at Work on a Cairn in the West Highlands", both depict Scottie type terriers very similar to those described in the first Scottish Terrier Standard.

In the 1800s, the Highlands of Scotland, including the , were abundant with terriers originally known by the generic term "short-haired" or "little Skye terriers."

While identification of the breed was being sought through the late 1800s, the Scottish terrier was known by many different names: the Highland, the Cairn, Diehard, and most often, the Aberdeen Terrier — named because of the dogs abundancy in the area and because a J.A. Adamson of had a lot of success exhibiting his dogs during the 1870s. Roger Rough, owned by Adamson, Tartan, owned by Mr Paynton Piggott, Bon Accord, owned by Messrs Ludlow and Bromfield and Splinter II, owned by Mr Ludlow, were early winners and are the four dogs from which all Scottish Terrier s ultimately began. It is often said that all present day Scotties stem from a single dame, Splinter II, and two sires. In her heavily researched book, "The New Scottish Terrier", Cindy Cooke refers to Splinter II as the "foundation matron of the modern Scottish Terrier." Cooke goes on to say "For whatever reason, early breeders linebred on this bitch to the virtual exclusion of all others. Mated to Tartan, she produced Worry, the dam of four champions. Rambler, her son by Bonaccord, sired the two founding sires of the breed, Ch. Dundee (out of Worry) and Ch. Alistair (out of a Dundee daughter)" (The New Scottish Terrier, 1996).

Captain Gordon Murray and S.E. Shirley were responsible for setting the type in 1879. Shortly afterwards, in 1879, Scotties were for the first time exhibited at in , while the following year they began to be classified in much the same way as is done today.

In 1881 the "Scottish Terrier Club of England" was founded, being the first club dedicated to the breed. The club secretary, H.J. Ludlow, is responsible for greatly popularising the breed in the southern parts of Great Britain. The "Scottish Terrier Club of Scotland" wasn't founded until 1888, seven years after the English club. Following the formation of the English and Scottish clubs there followed several years of differences and arguments with regards to what should be deemed as the correct and official standard of the breed. Things were finally settled by a revised standard in 1930, which was based on four prepotent dogs. The dogs were Robert and James Chapman's Heather Necessity, Albourne Barty, bred by AG Cowley, Albourne Annie Laurie, bred by Miss Wijk and Miss Wijk's Marksman of Docken (the litter brother of Annie Laurie). These four dogs and their offspring modified the look of the Scottie, particularly the length of the head, closeness to the ground and the squareness of body. Their subsequent success in the show ring led to them becoming highly sought after by the British public and breeders. As such, the modified standard completely revolutionized the breed. This new standard was subsequently recognised by the UK circa 1930.

Scotties were introduced to America in the early 1890's but it was not until the years between and that the breed became popular. A club was formed in 1900 and a standard written in 1925. The Scottish Terrier was recognized by the in 1934.

The Scottie is the only breed of dog that has lived in the three times.

Tatum O'Neal owned a Scottish Terrier. She was said to be so saddened by her dog's death to cancer and old age that she relapsed into drugs.

A famous fictional Scottie is Jock from the feature film "", where he acted as the retired captain with a Scottish tartan overcoat. In 1955, when the movie was originally released, Jock became one of the most popular dog names of the time.

A Scottish Terrier and a West Highland White Terrier are featured on the label, and the breed has been used as the mascot for the Chum brand of dog food, appearing on both the brand's packaging and TV commercials. Scottish Terriers are also part of the emblem for the clothing line, and Radley handbags. In Enid Blyton's Mystery Series books, there is a Scottish Terrier called Buster, who is always part of the mysteries.

In May 2007, named the Scottish Terrier its official mascot.

in Decatur, Georgia also uses the Scottie as their mascot. [ [http://www.agnesscott.edu Agnes Scott College ] . URL last accessed on .] The College of Wooster 'Scots' in Wooster, Ohio, has used a Scottish Terrier as one of the symbols of the college.