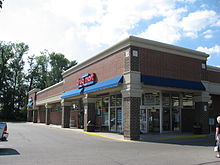 Discount Drug Mart, Inc., is an Ohio-based drug store chain that opened its first store in Elyria, Ohio in 1969. It now operates over 67 stores in more than 20 of Ohio’s 88 counties, with its corporate headquarters and warehouse based in Medina, Ohio. The store prides itself on its one-stop shopping and the variety of products it provides. Today, Discount Drug Mart has a revenue of over $550 million dollars and continues to expand, catering to smaller cities that do not have the population to attract a larger retailer.

In 1969, Parviz Boodjeh established the first Discount Drug Mart in Elyria, Ohio, a city west of Cleveland, Ohio. At the first Discount Drug Mart, customers could have prescriptions filled, purchase toiletries, and find grocery and gift items. In fact, the first store even carried durable good items such as lawn mowers and vacuum cleaners. Soon, however, Boodjeh found that customers would return these items when they needed repair, burdening his store with a service he was not interested in providing. So he opted to add to his store's shelves the hardware and parts needed to fix such items and found that this enhanced his recipe for success. Boodjeh's concept of one-stop shopping was well received, paving the way for three additional stores by 1973.

In the early 1980s, Boodjeh began standardizing the merchandise offerings among his growing chain and commissioned an architect to develop a store design on which all Discount Drug stores would be based. A 22,000-square-foot (2,000 m2) model was produced and adopted, and this design was later modified and enlarged to 24,000 square feet (2,200 m2), making room for new product lines and a video rental business. Also during the 1980s, computer technology helped the chain distinguish itself as an innovator, with such in-store additions as electronic price scanners, which not only facilitated the check out process but also generated reports to management on product sales and reordering needs. Discount Drug also turned to computers to help map out new store displays. Using a planogram (known in the industry as a Pegman), Discount Drug computers showed store managers where and how products should be displayed.

By the late 1980s, Discount Drug was recognized as one of the hardest working chains in the country. In 1989 it ranked 34th in sales according to a Chain Store Guide list of the top 100 drug chains. Moreover, industry figures showed the chain sold more than $300 worth of merchandise per square foot. However, the early 1990s brought intense competition to the industry. Discount Drug Mart was still smaller than the Ohio drug store chains of Revco and Phar-Mor, and even these chains were being threatened by the superstore concept as championed by Kmart, Wal-Mart, and Target Corporation, which were all expanding at a breakneck pace.

In response, Boodjeh eschewed the aggressive marketing strategy of his competition, remaining content with gradual, steady growth averaging three to five new stores per year. Such conservative growth proved a successful strategy. Moreover, instead of looking to grow in areas that already featured competitors' stores, he focused on pinpointing locations that needed a discount drug retailer. Each new Discount Drug site was carefully selected to meet his specific criteria: it had to be close to the street and located near other successful businesses to ensure customer draw. And in order to keep company assets available for further expansion, Boodjeh sought out developers to purchase the land, build the store, and then lease the property to Discount Drug.

Also unlike many other retail chains, Discount Drug kept corporate costs exceptionally low. Located on the industrial southwest side of Medina, Ohio, Discount Drug headquarters were modestly furnished throughout with linoleum floors, metal desks, and a common "bullpen" room that served as office to Boodjeh and other company executives. Without the managerial "ivory tower," Discount Drug fostered a sense of community and cooperation among its executives and work force. Finally, Boodjeh made sure that Discount Drug management remained in touch with the customer. Having observed that retaining many levels of management tended to distance the decision makers from the community they served, he established a corporate policy requiring all supervisors to spend a minimum of three days a week in each of their respective stores. In fact, Boodjeh himself served as store pharmacist one day a week at one of the chain's outlets.[2]

Today Discount Drug Mart continues to expand across Ohio, although it has no plans to go nationwide. The mid to late 90’s brought a change to the faces of many of the old stores as they were remodeled, updated, and enlarged. The face of this new store soon became a model for all subsequent stores built, with well over 25,000 square feet (2,300 m2) of space[3].

Recently, a small number of stores began offering a limited number of fresh produce items such as Potatoes, Bananas, Carrots, Onions, and other fruits and vegetables as they are seasonally available. This was a departure from the store’s normal operating procedure, as many food items offered in the past were limited to those that were non-perishable with long shelf life.

Discount Drug Mart continues its tradition of remaining open 7 days a week, 365 days a year. The store is only open for half a day on Christmas and Thanksgiving.