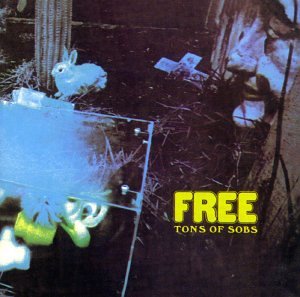 "Tons of Sobs" is the debut album by English /rock band Free, recorded in November 1968. While the album was a commercial failure, failing to chart in the UK and #197 in the America, Free are still cited as one of the definitive bands of the boom of the late 1960s even though this is the only album of their canon that can strictly be called . The title of the album does not relate directly to the content of the album; it is both a colloquialism of "lots of ", reflecting the swaggering attitude with which the album was made, and an oblique reference to the darker, more sombre moments of the record.

Free were a new band when they recorded "Tons of Sobs", and they were extremely young and precocious: none of them was yet twenty and the youngest, Andy Fraser, was just sixteen years old. They had achieved a following through constant touring, and their debut album consisted for the most part of their live set-list. That said, eight out of the album's ten tracks are originals which was unusual compared to the debut albums of bands such as the and the .

With the band signed to 's , was hired to produce the album (he would later become notable for producing early albums for and 's legendary album "" (1979). He opted for an extremely attitude to production, due to the extremely low budget of about £800, creating a very raw and raucous sound - although it must be admitted that the relative inexperience of the band may have also been a contributing factor to this. As such the album, while in production terms a marked contrast from the band's later albums, holds up well for fans of modern bands such as the who eschew overproduction for artistic rather than financial reasons. The simple nature of the recording meant that many tracks translated well into a live setting and several songs from this album were still performed even when the band had written and recorded many more for subsequent records.

# "I'm a Mover" - Session (Rodgers) 3.04
#*This was a live session of the album track recorded several months after the album's release; the song is more tightly performed, and there is a marked change in Rodgers' voice.
# "Waitin' on You" - BBC Session (King/Washington) 2.15
#*Recorded months before the album was released, this is a cover of a song and is performed in traditional style.
# "Guy Stevens Blues" (Rodgers/Fraser/Kirke/Kossoff) 4.39
#*This is a slow, instrumental blues jam recorded during the album sessions and dedicated to the producer as a joke.
# "Moonshine" (Rodgers/Kossoff) 5.09
#*"Moonshine" is here presented with an alternative vocal performance; aside from that there is little difference between this and the version that appears on the album.
# "Sweet Tooth" (Rodgers) 4.53
#*This is an early take with slightly altered lyrics, and a slightly gentler sound that emphasises the song's jazz influence over the rock. It is notable for containing a 'false start' where the band have to start playing the song again.
# "Visions of Hell" (Fraser/Rodgers) 3.46
#*With a tone of melodrama similar to "Moonshine", "Visions of Hell" was intended to be an album track but was withheld at a late stage in favour of "The Hunter".
# "Woman by the Sea" (Fraser/Rodgers) 3.30
#*"Woman by the Sea" is a melancholic song dealing with fond memories. It would eventually be reworked as "Remember" on "Fire and Water" (1970), where it was considerably more pop-oriented.
# "Over the Green Hills" - BBC Session (Rodgers) 3.51
#*A musically simpler version of the album track that showcases Rodgers' much-developed voice, this session sees the song performed as one track and also contains an extra verse.