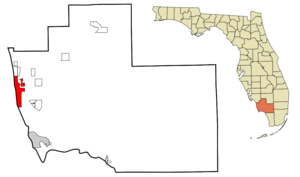 mapsize = 250x200px
map_caption = Location in Collier County and the state of

Ave Maria, Florida, United States is a planned currently under development in Collier County, near Immokalee and Naples. Local community and business leaders have partnered with the to create a new community that will have a new 5,000 student Roman Catholic university, , at its core. The town is planned for more than 8,000 residential units at build out, as well as many amenities. Amenities are to include a 17 court tennis facility, a golf course, a water park with separate lap pool, resort pool and water park, multiple soccer and softball fields, pickle ball courts, a dog park, an amphitheater, two indoor fitness facilities which will include indoor basketball and gyms, as well as walking and preserve trails and an activities director. The town and university opened in 2007.

Detailed plans for the community and university have been posted online and have garnered both praise and criticism. The driving force behind this development is philanthropist , founder of and the Chancellor of Ave Maria University. His partner is Companies, a company involved in the project as part of its "Rural Stewardship" program, a program designed to conserve rural agriculture and environment while allowing for economic growth and development. Monaghan and Barron Collier Companies have exclusive control of commercial real estate in the town.

The new university at the core of the community is a follow-on to and , both founded in . The community in Florida came about after difficulties in obtaining zoning and sundry support in Michigan. The reception of both the town and university in Florida has been quite positive, gaining county approval and breaking ground in 2005.

Monaghan once stated that commercial leases in the town would enforce beliefs consistent with the Roman Catholic faith, including prohibiting the sale of or and banning the performance of s. Consequently, the announced it would oppose these plans in court if they were carried out. [ [http://www.newsweek.com/id/56899 "Halfway to Heaven: A Catholic millionaire's dream town draws fire"] , "Newsweek", February 27, 2006.
[http://www.timesonline.co.uk/article/0,,2089-2058771,00.html/ 'Pizza pope' builds a Catholic heaven] , "The Sunday Times", February 26, 2006.
] Monaghan later explained in a public statement, "I prefer not to have those things, but I am not going to break the law." [Glanton, Dahleen. [http://www.ledger-enquirer.com/mld/ledgerenquirer/news/nation/14259455.htm Catholic billionaire envisions city of God] "Chicago Tribune". April 04, 2006.]

There was also controversy with groups when it was rumored that Monaghan would prohibit realtors to sell homes and condos to and couples and families in Ave Maria. Monaghan has denied this claim.

The centerpiece of the town and university is a Roman Catholic oratory. It is a neo-Gothic style building convert|100|ft|m in height, covering convert|25000|sqft|m2, with a glass and steel exterior and a crucifix convert|65|ft|m in height. While still sizable, this is a scaled back version of the original plan, which had a convert|60000|sqft|m2|sing=on floor plan. [ [http://www.news-press.com/apps/pbcs.dll/article?AID=/20050722/NEWS01/507220403/1075 "Ava Maria's church plan scaled back"] , The News Press, July 22, 2005] Many people have criticized the choice of designs, saying that either a traditional European style or a local Spanish mission style would be better for aesthetic and climatic reasons. Monaghan, an admirer of the architectural style of , supports the design. [ [http://www.cruxnews.com/rose/rose-14may04.html "An alternative proposal for Ave Maria"] , CruxNews.com, May 14, 2004]

The community has drawn criticism from environmental and conservation groups because the location of the development is in the middle of a primary breeding ground of the critically endangered . [cite press release |title=Conservation Group Calls on Federal Agencies to Protect Critical Florida Panther Habitat |publisher=Defenders of Wildlife |date=2007-02-20 |url=http://www.defenders.org/newsroom/press_releases_folder/2007/02_20_2007_calling_on_federal_agencies_to_protect_critical_florida_panther_habitat.php |accessdate=2007-07-25]