Baden is a historical state on the east bank of the Rhine in the southwest of Germany, now the western part of the Baden-Württemberg (state) of Germany.[1]

It came into existence in the 12th century as the Margraviate of Baden and subsequently split into different lines, which were unified in 1771. It became the much-enlarged[1] Grand Duchy of Baden through the dissolution of the Holy Roman Empire in 1803–06 and remained a sovereign country until it joined the German Empire in 1871, remaining a Grand Duchy until 1918 when it became part of the Weimar Republic as the Republic of Baden. Baden was bounded to the north by the Kingdom of Bavaria and the Grand Duchy of Hessen-Darmstadt; to the west[1] and practically throughout its whole length by the River Rhine, which separated it from the Bavarian Rhenish Palatinate and Alsace in modern France; to the south by Switzerland, and to the east by the Kingdom of Württemberg, the Principality of Hohenzollern-Sigmaringen and partly by Bavaria.

After World War II in 1945, the French military government created the state of Baden (originally known as "South Baden") out of the southern half of the former Baden, with Freiburg as capital. This southern half of Baden was declared in its 1947 constitution to be the true successor of the old Baden. The northern half of the old Baden was combined with northern Württemberg as part of the American military zone and formed the state of Württemberg-Baden. Both states became states of West Germany upon its formation in 1949.

In 1952 Baden merged with Württemberg-Baden and Württemberg-Hohenzollern (southern Württemberg and the former Prussian exclave of Hohenzollern) to form Baden-Württemberg. This is the only merger of states that has taken place in the history of the Federal Republic of Germany.

The anthem of Baden is called "Badnerlied" (English: Song of the people of Baden) and consists of usually four or five traditional verses. However, over the years, many more verses have been added — there are collections with up to 591 verses of the anthem.

The country was divided into the following districts:

The capital of the duchy was Karlsruhe, and among important towns other than the above, there are Rastatt, Baden-Baden, Bruchsal, Lahr and Offenburg. The population is most thickly clustered in the north and near the Swiss city of Basel. The inhabitants of Baden are of various origins, those to the south of Murg being descended from the Alemanni and those to the north from the Franks, while the Swabian Plateau derives its name from the adjacent German tribe (Schwaben) living in Württemberg.

Due to the traditional rivalry between the populations of Baden and Württemberg, there was a strong opposition in Baden (predominantly in the South) against the unification of the two initially independent Länder. In recent years patriotism in Baden has increased again, mainly due to discontent with the politics of the government in Stuttgart (situated in Württemberg). 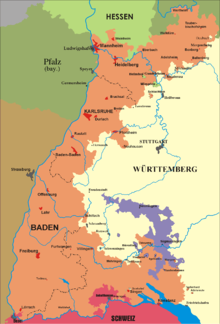 The Grand Duchy had an area of 15,081 km2 (5,823 sq mi)[2] and consisted of a considerable portion of the eastern half of the fertile valley of the Rhine and of the mountains which form its boundary.

The mountainous part was by far the most extensive, forming, indeed, nearly 80% of the whole area. From Lake Constance in the south to the river Neckar in the north is a portion of the Black Forest (German: Schwarzwald), which is divided by the valley of the Kinzig into two districts of different elevation. To the south of the Kinzig the mean height is 945 m (3,100 ft)), and the loftiest summit, the Feldberg, reaches about 1,493 m (4,898 ft), while to the north the mean height is only 640 metres (2,100 ft), and the Belchen, the culminating point of the whole, does not exceed 1,365 meters (4,478 ft). To the north of the Neckar is the Odenwald Range, with a mean of 439 meters (1,440 ft), and in the Katzenbuckel, an extreme of 603 metres (1,978 ft). Lying between the Rhine and the Dreisam is the Kaiserstuhl, an independent volcanic group, nearly 16 km in length and 8 in breadth, the highest point of which is 536 metres (1,759 ft).

The greater part of Baden belongs to the basin of the Rhine, which receives upwards of twenty tributaries from the highlands; the north-eastern portion of the territory is also watered by the Main and the Neckar. A part, however, of the eastern slope of the Black Forest belongs to the basin of the Danube, which there takes its rise in a number of mountain streams. Among the numerous lakes which belonged to the duchy are the Mummelsee, Wildersee, Eichenersee and Schluchsee, but none of them is of any size. Lake Constance (Bodensee) belongs partly to the German federal states (Länder) of Baden-Württemberg and Bavaria, furthermore to Austria and Switzerland.

Owing to its physical configuration Baden presents great extremes of heat and cold. The Rhine valley is the warmest district in Germany, but the higher elevations of the Black Forest record the greatest degrees of cold experienced in the South. The mean temperature of the Rhine valley is approximately 10°C and that, of the high table-land, 6°C. July is the hottest and January the coldest month.

The mineral wealth of Baden was not great, but iron, coal, lead and zinc of excellent quality were produced, and silver, copper, gold, cobalt, vitriol and sulfur were obtained in small quantities. Peat was found in abundance, as well as gypsum, china clay, potter's earth and salt. The mineral springs of Baden are still very numerous and have acquired great celebrity, those of Baden-Baden, Badenweiler, Antogast, Griesbach, Friersbach and Peterthal being the most frequented.

In the valleys the soil is particularly fertile, yielding luxuriant crops of wheat, maize, barley, spelt, rye, beans, potatoes, flax, hemp, hops, beetroot, and tobacco; and even in the more mountainous part, rye, wheat and oats are extensively cultivated. There is a considerable extent of pasture-land, and the rearing of cattle, sheep, pigs, and goats is extensively practised. Of game, deer, boar, snipe and wild partridges are fairly abundant, while the mountain streams yield trout of excellent quality. Viticulture is increasing, and the wines continue to sell well. The Baden wine region is Germany's third largest in terms of vineyard surface. The gardens and the orchards supply an abundance of fruit, especially sweet cherrys, plums, apples and walnuts, and bee-keeping is practised throughout the country. A greater proportion of Baden than any other south German state is occupied by forests. In these the predominant trees are European Beech and Silver Fir, but many others, such as Sweet Chestnut, Scots Pine, Norway Spruce and the exotic Coast Douglas-fir, are well-represented. A third, at least, of the annual timber production is exported.

Around 1910, 56.8% of the region's land mass was cultivated and 38% was forested, but the agricultural sector, which before 1870 yielded the bulk of the region's wealth, had been superseded by industrial production. The chief manufactures were machinery, woollen and cotton goods, silk ribbons, paper, tobacco, china, leather, glass, clocks, jewelry, and chemicals. Beet sugar was also manufactured on a large scale, as were wooden ornaments and toys, music boxes and organs.

The exports of Baden consisted mostly of the above goods, and were considerable, but the bulk of its trade consisted of transit. The country had many railways and roads, as well as the Rhine for transporting good vis ship. Railways were run by the state. A rail-line ran mostly parallel with the Rhine, with oblique branches from East to West.

Mannheim was the great emporium for export down the Rhine and has much river traffic. It was also the chief manufacturing town for the duchy, and an important administrative centre for the northern part of the country.

The educational institutions of Baden are numerous and flourishing, and public education is entirely in the hands of the government. There are five universities, one traditionally Protestant in Heidelberg, one traditionally Roman Catholic in Freiburg im Breisgau, one each in Konstanz and Mannheim, and a well-known technical university in Karlsruhe. The grand-duke was a Protestant; under him, the Evangelical Church was governed by a nominated council and a synod consisting of a "prelate", 48 elected and 7 nominated lay and clerical members. The Roman Catholic Archbishop of Freiburg is Metropolitan of the Upper Rhine.

After 1771 the only surviving branch retained full authority and in return for compliance with Napoleon, was raised to electoral dignity in 1803, and then grand ducal status in 1806.[2] Baden as a unified state was recognized as a sovereign member of the newly-formed German Confederation by the Congress of Vienna in 1814–15.[1]

Frederick I (1852–1907), mostly an ally of Prussia helped to found the German Empire.[1] The last grand duke of Baden, Frederick II, abdicated in 1918. In 1919 Baden ceased to be a Grand Duchy and became a Republic within the Weimar Republic.[1]