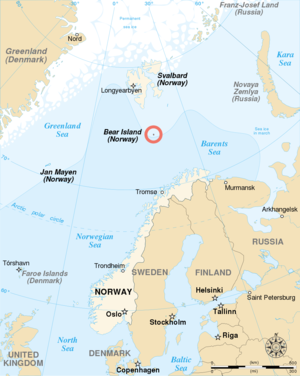 image caption = Bear Island is located north of mainland Norway, in the south of the

Bear Island, sometimes referred to under the Norwegian name of Bjørnøya (IPA2|ˈbjøːɳøja), is the southernmost island in of the Norwegian . The island is located in the western part of the , approximately halfway between and the North Cape.

Bear Island was discovered by the Dutch explorers and on . It was named after a that was seen swimming nearby. The island was considered until the of 1920 placed it under Norwegian sovereignty.

Despite its remote location and barren nature, the island has seen commercial activities in past centuries, such as , and . However, no settlements have lasted more than a few years, and Bear Island is now uninhabited except for personnel working at the island's . Along with the adjacent waters, it was declared a in 2002.

Seafarers of the Viking era may have known Bear Island, but the documented history begins in 1596, when sighted the island on his third expedition.

Bear Island has never been extensively settled. The remnants of a whaling station from the early 20th century can be seen at "Kvalrossbukta" ("walrus bay") in the southeast. From 1916 to 1925 was mined at a small settlement named "Tunheim" on the northeastern coast, but mining was given up as unprofitable. Due to the cold and dry climate, the remains of the settlement, including a half-destroyed jetty and a steam locomotive, are relatively well preserved.

The strategic value of Bear Island was recognised in the late 19th century, when and demonstrated their interests in the Barents Sea. The German journalist and adventurer visited the island in 1898 and 1899 and claimed rights of ownership. In 1899, the German fishery association "Deutsche Seefischerei-Verein" (DSV) started investigations of whaling and fishery in the Barents Sea. The DSV was secretly in contact with the German naval command and considered the possibility of an occupation of Bear Island. In reaction to these advances, the Russian Navy sent out the protected cruiser "Svetlana" to investigate, and the Russians hoisted their flag over Bear Island on . Although Lerner protested the action, no violence occurred and the matter was settled diplomatically with no definitive claims of sovereignty over Bear Island by any nation.

The whole island was privately owned by the coal mining company Bjørnøen AS from 1918 to 1932, when the Norwegian state took over the shares. Bjørnøen AS now exists as a state owned company and is jointly managed with , the company that runs the operations of on .

As the shipping routes from the to and the ports of the pass through the Barents Sea, the waters near Bear Island were of great strategic importance in the Second World War as well as the . Although Svalbard was not occupied by Germany in the Second World War, German forces erected several weather stations there. An automated radio station was deployed on Bjørnøya in 1941. German forces attacked several arctic convoys with military supplies for the in the waters surrounding Bear Island. They inflicted heavy losses upon in June/July 1942 but were ineffective in the on New Year's Eve 1942. The waters southeast of Bear Island were the scene of more naval battles in 1943. In November 1944, the Soviet Union proposed to annul the Svalbard Treaty with the intention of gaining sovereignty over Bear Island. Negotiations with of the Norwegian government-in-exile had however not lead to an agreement by the end of the Second World War and the Soviet proposals were never implemented.

In 2002 a was established that covers all of the island, except 1.2 km² around the meteorological station; the reserve also includes the adjacent waters to four s (7.4 km) from the coast.

Agencies of the Norwegian government have conducted s of the waters of Svalbard throughout the 20th century, namely by "Norges Svalbard- og Ishavsundersøkelser" since 1928, its successor, the Norwegian Polar Institute since 1948, and the since 1984.

Bear Island lies in the westernmost part of the Barents Sea on which extends southward from and , forming a part of the . Water depths near the island and to the north and east do not much exceed 100 metres, but become much greater to the south, and especially some thirty s to the west, where the continental shelf slopes into the deep water of the and .

The island's outline is an irregular pointing south with a greatest north-south extension of 20 km and a greatest east-west extension of 15.5 km; its surface area is 178 km². The southern part of Bjørnøya is mountainous, the highest top being on the southeast coast at about 536 metres above . Other notable mountains are "Antarcticfjellet" in the southeast, and "Fuglefjellet", "Hambergfjellet", and "Alfredfjellet" in the southwest. The northern part of the island forms a lowland plain that comprises some two thirds of the surface area. The lowland is strewn with shallow freshwater lakes which cover some 19 km² in all. Several streams flow into the sea, often as s in the steeper parts of the coast. There are no s on Bear Island.

Apart from a few sandy beaches, the coast is mostly steep, with high cliffs and notable signs of erosion such as caverns and isolated rock pillars. A number of anchorages and landing points exist, as well as a small harbor at "Herwighamna" on the north coast. However, none of these are safe in all weather conditions and a ship mooring anywhere on Bear Island must therefore be prepared to weigh anchor at any time.

A branch of the carries warm water to Svalbard, creating a climate much warmer than that of other regions at similar latitude. Bear Island's climate is maritime-polar with relatively mild temperatures during the winter. January is the coldest month, with a mean temperature of −8.1 (base period 1961&ndash;1990). July and August are the warmest months, with mean temperatures of 4.4 °C. There is not much precipitation, with an average of 371 mm per year in the northern lowland area. The weather can be quite stable during the summer months, although foggy conditions are common, occurring during 20% of all days in July. Fog develops when warm air of Atlantic origin passes over cold water.

Because Bear Island lies on a boundary between cold water of polar origin and warmer Atlantic water, water temperatures within a few dozen nautical miles of the island are quite variable, sometimes reaching 10 °C in summer. During the winter develops on the coast, but it is rare on the open sea around Bear Island. The carries to Bjørnøya every winter, sometimes as early as October, but a significant amount of ice is not common before February.

The lasts from to , and the period of from until .

There is little plant growth, consisting mostly of and some , but no trees. The only indigenous land s are a few es. Despite its name, Bear Island is not a permanent residence of s, although many arrive with the expanding pack ice in the winter. Occasionally, a bear will stay behind when the ice retreats in spring and remain through the summer months.

Although there are currently no industrial activities on Bjørnøya or in its immediate vicinity, pollution by toxic and radioactive substances remains a threat to the island's virtually untouched nature. Exploration in the Barents sea and the recent development of the gas field off the northern coast of Norway shows that the ecologically sensitive polar and subpolar sea areas of the Norwegian and Barents Sea have come into the focus of the petrol and gas industry.

Bear island has a club for nude dippers ("Bjørnøya nakenbadeforening"), with a little over 2000 members. To qualify for membership one has to take a naked dip (head under water) and the event must be witnessed by someone of the oposite sex. Among the members are Knut Storberget (Norwegian minister of justice) and Kristin Krohn Devold (previous Norwegian minister of defence). The sea temperature is around 4°C.

* List of islands of Norway
* "Bear Island", a novel by which is set on Bear Island.

Publications of administrative and general interest are issued by the [http://www.sysselmannen.svalbard.no/eng] . Maps, research reports, and scholarly works about Svalbard-related subjects are available from the [http://npiweb.npolar.no] .

General information
* [http://odin.dep.no/jd/english/doc/white_paper/012001-040007/dok-bn.html Report to the Storting (1999-2000) on Svalbard] by the - extensive report on political, administrative, economical and scientific matters relating to Svalbard