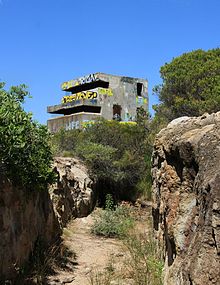 An observation post at the Malabar Battery, constructed during the Second World War

Malabar is a suburb in south-eastern Sydney, in the state of New South Wales, Australia. Malabar is located 12 kilometres south-east of the Sydney central business district, in the local government area of the City of Randwick.

Malabar is a coastal suburb situated around Long Bay. Malabar is mostly residential, but with large plots of land devoted to the Randwick Golf Course, the ANZAC Rifle Range and the Long Bay Correctional Centre. A small group of shops is located at Prince Edward Street, close to the intersection with Anzac Parade. To the north, the suburb is bounded by Malabar Headland which features the Malabar Battery, a World War II fortification complex. 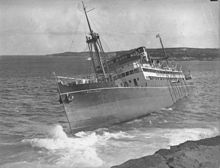 The wreck of the Malabar

Malabar was named after a ship called the MV Malabar, a Burns Philp Company passenger and cargo steamer that was shipwrecked at Long Bay on April 2, 1931. The ship itself was named after Malabar, Indonesia. Prior to the wreck, the suburb was known as either Brand or Long Bay. Following a petition by local residents, the new name was gazetted on September 29, 1933. There have been five shipwrecks on the headland at Malabar - the St Albans in 1882, the MV Malabar in 1931, Try One in 1947 and SS Goolgwai in 1955 (and an unnamed barge in 1955).[1]

The area was originally part of the land reserved for the Church and Schools Corporation; with the income intended to support clergy and teachers. Later, the land reverted to the Crown and by the end of the 19th century there was a small fishing village there. Later, Long Bay became popular for picnics and as a weekend resort.

Located on the Malabar headland, the Anzac Rifle Range is the largest rifle range in the southern hemisphere.[2] Originally called Long Bay Rifle Range, there is a long history of the site being used as a range, dating back to when recreational and militia shooting first commenced on this location in the 1850s which contributed to local security.

It was closed in 1968 when rifle shooting practice was moved to Holsworthy. When it reopened in 1970 it was renamed in memory of the Anzac soldiers of World War I.[3] Access to the headland is shared with the Sydney Model Aero Club and the Malabar Riding School.[4]

Two parts of the headland were handed over as a National Park to the NSW Government in February 2011 following an announcement by the Australian Federal Government, the rifle range is to be disposed of later once significant contamination is remediated. The Randwick City Council has announced a plan to stop stormwater pollution running into the bay by 2011. A deeper ocean sewerage outfall with diffusers at Malabar has improved the beach's water quality considerably since the (less deep) outfall opened in September 1990.

Malabar features a small group of shops and cafes in Prince Edward Street.

View of Malabar from the north side of Long Bay