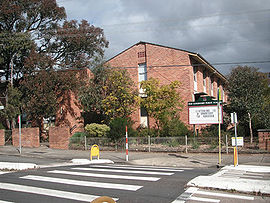 Old Guildford is a suburb of Sydney, in the state of New South Wales, Australia. Old Guildford is located 24 kilometres west of the Sydney central business district, in the local government area of the City of Fairfield and is part of the Greater Western Sydney region.

Lieutenant Samuel North was granted 640 acres (2.6 km2) here on 1837 and named his property Guildford, as he had ties with the Earl of Guildford. Although the name of the property changed to Orchardleigh in 1843 when it was sold by North, the name Guildford stuck to the region and the small hamlet which developed in the area around Woodville Road. In 1869 a school had opened and a church was built in the 1880s.[1][2]

According to the 2006 Australian Census, Old Guildford had a population of 2272 people with a very substantial Arabic speaking population (38%). The majority of the suburb's residents were Australian born with the next most common place of birth being Lebanon (13%) followed by Vietnam (3.6%), China (2.3%) and Syria (1.6%). Old Guildford had a higher than average number of families with children (56%) and the average family income of $966 per week was slightly less than the national average ($1171).[3]