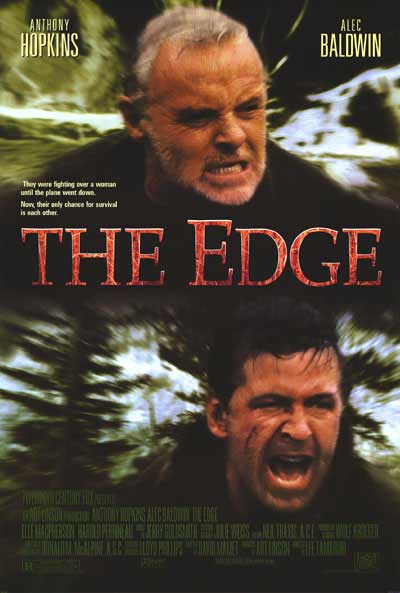 "The Edge" is a survival and relationship directed by starring as billionaire magazine publisher Charles Morse and as Bob Green, one of his ambitious employees. also co-stars as the group's photographer Stephen. has a supporting role as Hopkins' trophy wife and model for his magazine. Her presence in the beginning of the movie acts as a catalyst for the film's bold rivalry between Baldwin and Hopkins. has a supporting role as an innkeeper.

The movie was written by and, despite the unusual setting, it touches upon many themes common to Mamet's other works, including the bonding of strong male characters, tough posturings and playful surprises. The story explores, through action and intricate dialog, the survival instincts of these men in terms of their competition with each other and with their environment.

Charles Morse and Bob Green, along with Bob's friend and photographer Stephen, are on board a small plane over a mountainous region of rural . They have been duly warned that this is dangerous wilderness, one where man-eating bears are always on the prowl for food.

Charles is intense, intellectual and extremely possessive of his much-younger wife, a beautiful model who has accompanied them to Alaska for a photo shoot. Charles wonders aloud if Bob is after his money or his wife, or both. Bob tries to pass off as a joke. Charles states that the logical course is that Bob will kill him, and he calmly asks how he intends to do so.

Just then, the plane flies into a flock of geese, disabling the engine, and seriously injuring the pilot. The plane, out of control, clips a mountain peak breaking off one of the pontoons and crashes into a lake, taking the pilot with it to the depths. The others swim to shore.

A disagreement begins over how to survive. Bob uses a signal flare over Charles' objections to start a fire and thus evade the onsetting . Charles uses his wiles to find a way out of the wilderness, but the men end up going in a circle. They are lost, cold and hungry, with little hope of being rescued.

Making matters worse, they encounter a huge and aggressive which they narrowly elude by crossing a raging river via a makeshift log bridge. Charles is nearly swept over a waterfall, and he loses the remaining signal flares when he's dumped into the water.

The exhausted men settle down for another long night. Stephen hurts himself with a knife, cutting his leg very badly. Charles goes to gather firewood and returns to find the bloody cloth used to blot Stephen's wound stuck to a branch, blowing in the breeze. He angrily demands to know why it was not buried in the ground as he instructed. The smell of blood in the air could attract wild animals.

As he and Bob argue over this, Stephen hears a movement in the trees. The bear has returned. It attacks the terrified Stephen, leaving the other men powerless to stop it. Charles and Bob flee in fear that they will be next. They decide to stay on the move, all the while looking for food of their own and a way to get rescued.

Much to their horror, the bear continues to hunt them relentlessly. It shows up unexpectedly behind Charles while he is fishing in a river with makeshift tackle. They light a ring of fire around their next camp, which burns out by morning. Charles concludes that they must kill the bear or be killed. Bob is filled with despair, but Charles refuses to let him give up. He promises Bob that everything is going to be all right.

They set a trap for the bear. Luring it with the smell of their own blood on a handkerchief in the breeze, then attract the bear to a location where they have carved long, sharpened spears from nearby trees. The spears fail to stop the bear, who charges the two men. Bob is injured and about to die. Charles coaxes the animal away. As the bear rears up on its hind legs to crush him, Charles plants his spear into the ground and impales the bear under the power of its own weight, killing it.

The beast conquered, things begin to go better. They now have food and make warm robes from the bear's pelt. Now they need to somehow find their way back to civilization, having realized that search parties are unlikely to be checking in their area. They come across an old shack, a hunter's cabin with a canoe, first-aid kit, whiskey and a rifle with shells. By chance, Charles finds proof that Bob does indeed have a relationship with his wife.

After consuming some alcohol found in the shack, Bob loads the hunting rifle and orders Charles outside. He believes that he can make it back to civilization alone using the canoe. Charles doesn't think that Bob will kill him after the adventure they have just shared, but he maneuvers Bob to step backward. Still trying to talk himself into shooting, Bob backs into a , a bear trap outside the cabin, a pit with sharp spikes where Bob's leg is impaled on a spike.

Bob is certain Charles will leave him there, but instead Charles pulls him out of the pit and tends to his wounds. Charles takes Bob and the canoe downriver. In a clearing, where Charles starts a fire to keep them warm, Bob vows that Charles's wife was never involved in any plot to kill him. He asks why Charles would help someone who has so horribly betrayed him. A helicopter appears and circles the two men. Bob dies before it can land of the infection and blood loss.

Charles is returned safely to his wife. Her face shows that Bob who she really loved was lost, and that Charles has learned of her disloyalty to him. He nonetheless tells the press who ask about the fate of the two men with him that they both died heroically, "saving my life."

The shooting of the film is discussed by in his 2002 book "What Just Happened?". Initially called "Bookworm", the script was turned down by and before Alec Baldwin settled on the role of Green. showed some interest in the role of Morse but ultimately declined. Three months before release, the studio felt "Bookworm" needed a more commercial title. Dozens of others were considered, according to Linson, until the film was renamed "The Edge". [cite book |last=Linson |first=Art |authorlink=Art Linson|title=What Just Happened? Bitter Hollywood Tales from the Front Line|year=2002 |publisher=Bloomsbury|location=New York|isbn=1-58234-240-7]

The DVD was released by on , . It contains no special features and has a non- widescreen transfer.