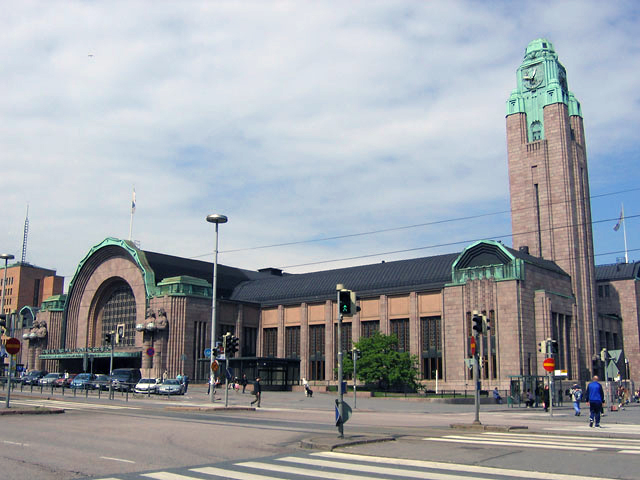 Helsinki Central railway station ( _fi. Helsingin rautatieasema, _sv. Helsingfors järnvägsstation) is a widely recognised landmark in central , , and the focal point of in the area. It serves as the point of origin for all trains in the local network, as well as for a large proportion of long-distance trains in Finland. The station also hosts the , which is the busiest station of the .

The station is mostly clad in Finnish , and its distinguishing features are its clock tower and the two pairs of statues holding the spherical lamps, lit at night-time, on either side of the main entrance. Animated characters based on the statues have recently been featured in some major advertising campaigns by Finland's government-owned railway operator VR, to the extent of releasing rap singles allegedly sung by "Kivimiehet" ("The stone men").

The station is used by approximately 200,000 passengers per day, making it Finland's most-visited building.

There are 19 platforms at the station. Numbers 1-4 are on the east side and serve local trains on the route, their tracks stop short of the main station roof. Numbers 5-12 in the centre of the station are the main platforms for longer-distance trains which stretch down to terminate in front of the main station building, commonly 5-10 serve trains running via Tikkurila to , and other points north and east, while 11-12 serve express trains via the line to . Numbers 13-19 are on the west side and serve local trains on the Espoo and routes, again their tracks stop short of the main station roof. The tracks funnel into separate express and local tracks for both the Espoo and the Tikkurila routes with the express tracks in the middle and the local tracks on the outside, aligning with their respective platforms. This gives 8 principal tracks but there is a 9th, additional express track for the Tikkurila route out through in the Helsinki suburbs, the first station which all trains stop at, 5 minutes out of Helsinki main station.

Outside the station the loading area for the Finnish car-carrying trains is on the west side. Also on the west side, a branch freight route turns to the west and passes through the inner west side of Helsinki to the West Harbour.

The main maintenance area for the Finnish Railways is located at Pasila, the first station out of Helsinki Central. The old roundhouse facility to the south of Pasila station still stands and is used for sundry functions. The main area is now to the north of Pasila station, in the fork between the Espoo and the Tikkurila lines.

Steam locomotives were replaced by in the 1950s on Finnish railways, and in turn the first electric trains were introduced in 1969-70 on the Helsinki local lines; the trains introduced are that time are still in substantial use. Main line trains were then gradually changed over as the electric network was extended over the bulk of the Finnish rail system, including all trains which serve Helsinki.

Helsinki station serves as a central hub for Finnish transport. There are bus stations on both sides of the main station building, and the airport bus leaves from the west side. The Rautatientori station is located under the main station building, linked through the pedestrian underpass and underground shopping centre complex, which has entrances in the main hall of the station and at various points in the surrounding city centre streets. The majority of Helsinki's tram routes pass in front of, or to the right hand side of, the station.

The first railway station in Helsinki was built in 1860, as Finland's first railway between Helsinki and was opened. The station's plans were drawn by the Swedish . However, as the popularity of railways grew, the station turned out to be too small, and a contest was organised in 1904 with the intention of producing plans for a new station. The contest received 21 entries, and was won by , with a pure national romanticist design, which sparked off a vigorous debate about the architecture of major public buildings, with demands for a modern, rational style. Saarinen himself abandoned romanticism altogether and re-designed the station completely. The new design was finished in 1909 and the station was opened in 1919.

died at the station on of a stroke, as he was going back home to after having retired as President. Legend says he died in the arms of Marshal Mannerheim.

The clock tower side of the station was damaged in a fire on [ [http://www.yle.fi/vierivatkivet/index.php/aiheet/106/ Vierivät kivet 3 February 2004] ] .

The railway station has been renovated occasionally. In the 1960s the underground Asematunneli tunnel was built. The first surveillance cameras in the station hall were installed in the spring of 1968 [ , , p.14.] . The first electric train arrived at the station on , . After testing, regular electric train traffic was started between Helsinki and on January 26 [Helsingin Sanomat , p. 11 and , p. 3.] .

In 1982, the Helsinki Metro station Rautatientori was built under the railway station. In 2000, a glass roof, which had already been in the original drawings by Eliel Saarinen, was built over the railway station's platforms, although to a new design. In 2003, the shopping wing "Kauppakuja" was opened along with a hotel.

One of the station's less known features is a private 50 m² waiting lounge exclusively for the use of the and his/her official guests. The lounge, featuring designed by Eliel Saarinen, has two entrances, a bigger one leading outside to the square and a smaller one leading to the main station hall. The lounge was first completed in 1911 and was originally intended for the private use of the , but the First World War delayed its official inauguration to 1919, at which point it had been converted into a temporary military hospital, and was afterwards given to the use of the Finnish President. According to Kari Pekka Rosenholm, the former station manager, the lounge is the only one of its kind in the entire world.