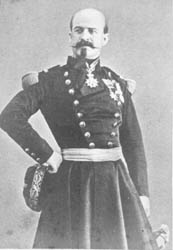 Louis Jules Trochu (12 March 1815 - 7 October 1896) was a French military leader and politician. He served as President of the - being France's "" - from 4 September 1870 until his resignation on 22 January 1871 (although he retained the role symbolically until the legislative elections of February 1871).

He was born at Palais (). Educated at St. Cyr, he received a commission in the Staff Corps in 1837, and was promoted to lieutenant in 1840, and captain in 1843. He served as a captain in under Marshal Bugeaud, who, in recognition of his gallantry in the battles of Sidi Yussuf and Isly, made him his "" and entrusted him with important commissions. He was promoted to major in 1845, and to colonel in 1853. He served with distinction throughout the Crimean campaign, first as "aide-de-camp" to Marshal St. Arnaud, and then as general of brigade, and was made a commander of the and general of division. He again distinguished himself in command of a division in the Italian campaign of 1859, where he won the Grand Cross of the Légion d'honneur.

In 1866 he was employed at the ministry of war in the preparation of army reorganization schemes, and he published anonymously in the following year "L'Armée française en 1867", a work inspired with sentiment, which ran through ten editions in a few months and reached a twentieth in 1870. This brochure brought him into bad odour at court, and he left the war office on half-pay and was refused a command in the field at the outbreak of the . After the earlier disasters in 1870, he was appointed by the emperor first commandant of the troops of Châlons camp, and soon afterwards (17 August) governor of Paris and commander-in-chief of all the forces destined for the defence of the capital, including some 120,000 regular troops, 80,000 mobiles, and 330,000 National Guards.

He worked energetically to put Paris in a state of defence and throughout the showed himself a master of the passive defensive. At the revolution of 4 September he became president of the Government of National Defence, in addition to his other offices. His "plan" for defending the city raised expectations doomed to disappointment; the successive sorties made under pressure of were unsuccessful, and having declared in one of his proclamations that the governor of Paris would never capitulate, when capitulation became inevitable he resigned the governorship of Paris on 22 January 1871 to General , retaining the presidency of the government until after the in February.

He was elected to the National Assembly by eight s, and sat for . In October he was elected president of the council general for Morbihan. In July 1872 he retired from political life and in 1873 from the army. He published in 1873 "Pour la vérité et pour la justice", in justification of the government of national defence, and in 1879 "L'Armée française en 1879, par un officier en retraite", a sort of supplement to his former work of 1867.

He died at Tours.