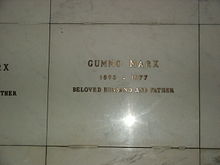 Milton "Gummo" Marx (October 21 or 23, 1892 or 1893[1] – April 21, 1977) was an American vaudeville performer and theatrical agent. He was the fourth-born of the Marx Brothers. Born in New York City, he worked with his brothers on the vaudeville circuit, but left acting when he was drafted into the U.S. Army during World War I, years before his four brothers began their legendary film career.

His military service began shortly before the Armistice, and he was therefore never sent overseas.

After leaving the army, Gummo, who in an interview said he never liked being on stage, went into the dressmaking business. Later he joined with his brother Zeppo Marx and operated a theatrical agency. After that collaboration ended, Gummo represented his brother Groucho Marx and worked on the television show The Life of Riley, which he helped develop. He also represented other on-screen talent and a number of writers.

Gummo was well respected as a businessman. He rarely had contracts with those he represented, his philosophy being that, if they liked his work, they would continue to use him, and if not, they would seek representation elsewhere. Unlike his brothers, his social life involved primarily business people.[citation needed]

Gummo was given his nickname because he had a tendency to be sneaky backstage, and creep up on others without them knowing (like a gumshoe). Another explanation cited by biographers and family members is that Milton, being the sickliest of the brothers, often wore rubber overshoes, also called "gumshoes," to protect himself from taking sick in inclement weather.

Gummo died on April 21, 1977, in Palm Springs, California.[2] His death was never reported to Groucho, who by that time had become so ill and weak that it was thought the news would be of further detriment to his health. Groucho died four months later.

His grandsons are actors Gregg Marx and Chris Marx.

When Richard J. Anobile asked Groucho in The Marx Bros. Scrapbook which brother to whom he was closest, Groucho replied. "Gummo. He's a nice man, and that's more than I can say for Zeppo."[citation needed]