Methodism is a movement of Protestant Christianity represented by a number of denominations and organizations, claiming a total of approximately seventy million adherents worldwide.[1] The movement traces its roots to John Wesley's[2] evangelistic revival movement within Anglicanism.[3][4][5] His younger brother Charles was instrumental in writing much of the hymnody of the Methodist Church.[6] George Whitefield, another significant leader in the movement, was known for his unorthodox ministry of itinerant open-air preaching.[7] The Methodist Church is known for its missionary work,[8] and its establishment of hospitals, universities, orphanages, soup kitchens, and schools to follow Jesus' command to spread the Good News and serve all people.[9]

Wesley, along with his brother founded the Holy Club while they were at Oxford, where John was a fellow and later a lecturer at Lincoln College.[10] The holy club met weekly and they systematically set about living a holy life. They were branded as "Methodist" by students at Oxford who derided the methodical way they ordered their lives. Wesley took the attempted mockery and turned it into a title of honour. Initially Whitefield and the Wesleys merely sought reform, by way of a return to the gospel, within the Church of England, but the movement spread with revival and soon a significant number of Anglican clergy became known as Methodists in the mid-18th century.[11] The movement did not form a separate denomination in England until after John Wesley's death in 1791. Although Wesley and the majority of his followers were decidedly Arminian in their theological outlook, George Whitefield, Howell Harris,[12] and Selina Hastings (the Countess of Huntingdon) were notable for being Calvinistic Methodists.

The influence of Whitefield and Lady Huntingdon on the Church of England was a factor in the founding of the Free Church of England in 1844. Through vigorous missionary activity Methodism spread throughout the British Empire and, mostly through Whitefield's preaching during what historians call the First Great Awakening, colonial America. After Whitefield's death in 1770, however, American Methodism entered a more lasting Wesleyan and Arminian phase of development.

Early Methodists were drawn from all levels of society, including the aristocracy,[4] but the Methodist preachers took the message to labourers and criminals who tended to be left outside of organized religion at that time.[13] Wesley himself thought it wrong to preach outside a church building until persuaded otherwise by Whitefield.[14]

Doctrinally, the branches of Methodism following the Wesleys are Arminian, while those following Harris and Whitefield are Calvinistic.[5] Wesley maintained the Arminian doctrines that were dominant in the 18th-century Church of England, while Whitefield adopted Calvinism through his contacts with Calvinists in Scotland and New England. This caused serious strains on the relationship between Whitefield and Wesley, with Wesley becoming quite hostile toward Whitefield in what had been previously very close relations. Whitefield consistently begged Wesley not to let these differences sever their friendship and, in time their friendship was restored, though this was seen by many of Whitefield's followers to be a doctrinal compromise.[15] As a final testimony of their friendship, John Wesley's sermon on Whitefield's death is full of praise and affection.[16]

Methodism has a very wide variety of forms of worship, ranging from high church to low church in liturgical usage. Both Whitefield and the Wesleys themselves greatly valued the Anglican liturgy and tradition, and the Methodist worship in The Book of Offices was based on the 1662 Book of Common Prayer.[17]

See John Wesley and George Whitefield for a much more complete discussion of early Methodism. 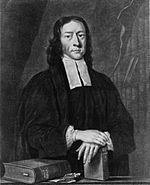 The Methodist revival originated in Epworth, North Lincolnshire, England. It began with a group of men, including John Wesley and his younger brother Charles, as a movement within the Church of England in the 18th century. The movement focused on Bible study and a methodical approach to scriptures and Christian living. The name "methodist" was a pejorative name given to a small society of students at Oxford who met together between 1729 and 1735 for the purpose of mutual improvement, given because of their methodistic habits. They were accustomed to receiving communion every week, fasting regularly, and abstaining from most forms of amusement and luxury. They also frequently visited the sick and the poor, as well as prisoners.

The early Methodists acted against perceived apathy in the Church of England, preaching in the open air and establishing Methodist societies wherever they went. These societies were divided into groups called classes — intimate meetings where individuals were encouraged to confess their sins to one another and to build each other up. They also took part in love feasts which allowed for the sharing of testimony, a key feature of early Methodists.

George Whitefield, another significant leader in the movement, and one of the Wesley brothers' fellow students at Oxford, became well known for his unorthodox ministry of itinerant open-air preaching.

Methodist preachers were notorious for their enthusiastic sermons and often accused of fanaticism. In those days, many members of England's established church feared that new doctrines promulgated by the Methodists, such as the necessity of a new birth for salvation, of justification by faith, and of the constant and sustained action of the Holy Spirit upon the believer's soul, would produce ill effects upon weak minds. Theophilus Evans, an early critic of the movement, even wrote that it was "the natural Tendency of their Behaviour, in Voice and Gesture and horrid Expressions, to make People mad." In one of his prints, William Hogarth likewise attacked Methodists as "enthusiasts" full of "Credulity, Superstition and Fanaticism." But the Methodists resisted the many attacks against their movement.

John Wesley came under the influence of the Moravians, and of the Dutch theologian Jacobus Arminius, while George Whitefield adopted Calvinistic views. Consequently, their followers separated, those of Whitefield becoming Calvinistic Methodists. Wesleyan Methodists have followed Arminian theology. 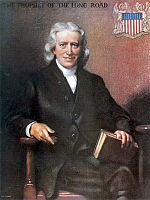 Francis Asbury was sent to America by Wesley

In 1766, Reverend Laurence Coughlan arrived in Newfoundland and opened a school at Black Head in Conception Bay.[18]

In the late 1760s, two Methodist lay preachers emigrated to America and formed societies. Philip Embury began the work in New York at the instigation of fellow Irish Methodist Barbara Heck. Soon, Captain Webb from the British Army aided him. He formed a society in Philadelphia and traveled along the coast. In 1770, two authorized Methodist preachers, Richard Boardman and Joseph Pilmoor, arrived from the British Connexion. They were immediately preceded by the unauthorized Robert Williams who quietly set about supporting himself by publishing American editions of Wesley's hymnbooks without obtaining permission to do so. These men were soon followed by others, including Francis Asbury. Asbury reorganized the mid-Atlantic work in accordance with the Wesleyan model. Internal conflict characterized this period. Missionaries displaced most of the local preachers and irritated many of the leading lay members. During the American Revolution, "the mid-Atlantic work" (as Wesley called it) diminished, and, by 1778, the work was reduced to one circuit. Asbury refused to leave. He remained in Delaware during this period.

Robert Strawbridge began a Methodist work in Maryland at the same time as Embury began his work in New York. They did not work together and did not know of each other's existence. Strawbridge ordained himself and organized a circuit. He trained many very influential assistants who became some of the first leaders of American Methodism. His work grew rapidly both in numbers and in geographical spread. The British missionaries discovered Strawbridge's work and annexed it into the American connection. However, the native preachers continued to work side-by-side with the missionaries, and they continued to recruit and dispatch more native preachers. Southern Methodism was not dependent on missionaries in the same way as mid-Atlantic Methodism.

Up until this time, with the exception of Strawbridge, none of the missionaries or American preachers was ordained. Consequently, the Methodist people received the sacraments at the hands of ministers from established Anglican churches. Most of the Anglican priests were Loyalists who fled to England, New York or Canada during the war. In the absence of Anglican ordination, a group of native preachers ordained themselves. This caused a split between the Asbury faction and the southern preachers. Asbury mediated the crisis by convincing the southern preachers to wait for Wesley's response to the sacramental crisis. That response came in 1784. At that time, Wesley sent the Rev. Dr. Thomas Coke to America to form an independent American Methodist church. The native circuit riders met in late December. Coke had orders to ordain Asbury as a joint superintendent of the new church. However, Asbury turned to the assembled conference and said he would not accept it unless the preachers voted him into that office. This was done, and from that moment forward, the general superintendents received their authority from the conference. Later, Coke convinced the general conference that he and Asbury were bishops and added the title to the discipline. It caused a great deal of controversy. Wesley did not approve of 'bishops' who had not been ordained by bishops.

By the 1792 general conference of the Methodist Episcopal Church, the controversy relating to episcopal power boiled over. Ultimately, the delegates sided with Bishop Asbury. However, the Republican Methodists split off from the Methodist Episcopal Church (MEC) in 1792. Also, William Hammet (a missionary ordained by Wesley who traveled to America from Antigua with Bishop Coke), led a successful revolt against the MEC in 1791. He opposed Bishop Asbury and the episcopacy. He formed his people into the American Primitive Methodist Church (not directly connected with the British Primitive Methodist Church). Both American churches operated in the Southeast and presaged the episcopal debates of later reformers. Regardless, Asbury remained the leading bishop of early American Methodism and did not share his "appointing" authority until Bishop McKendree was elected in 1808. Coke had problems with the American preachers. His authoritarian style alienated many. Soon, he became a missionary bishop of sorts and never had much influence in America.