The jian is a double-edged straight sword used during the last 2,500 years in China. The first Chinese sources that mention the jian date to the 7th century BCE during the Spring and Autumn Period;[1] one of the earliest specimens being the Sword of Goujian. Historical one-handed versions have blades varying from 45 to 80 centimeters (17.7 to 31.5 inches) in length. The weight of an average sword of 70-centimeter (28-inch) blade-length would be in a range of approximately 700 to 900 grams (1.5 to 2 pounds).[2] There are also larger two-handed versions used for training by many styles of Chinese martial arts.

In Chinese folklore, it is known as "The Gentleman of Weapons" and is considered one of the four major weapons, along with the Gun (staff), Qiang (spear), and the Dao (sabre).

Parts of the jian 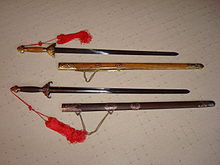 A pair of Jian with their Scabbards.

A guard or hilt protects the hand from an opposing blade. The shape of the guard can be described as short wings pointing either forward or backward. A minority of jian featured the disc-shaped guards associated with dao. A handle behind the guard can accommodate the grip of both hands or one hand plus two or three fingers of the other hand. Two-handed jiàn of up to 1.6 meters (65") in length, known as shuangshou jian, existed but were not as common as the one-handed version. The longer two-handed handle could be used as a lever to lock the opponent's arm if necessary. Grips are usually of fluted wood or covered in rayskin, with a minority being wrapped with cord.

The end of the handle was finished with a pommel for balance, to prevent the handle from sliding through the hand if the hand's grip should be loosened, and for striking or trapping the opponent as opportunity required — such as in "withdrawing" techniques. The pommel was historically peened onto the tang of the blade; thereby holding together as one solid unit the blade, guard, handle, and pommel. Most jian of the last century or so are assembled with a threaded tang onto which the pommel or pommel-nut is screwed.

Sometimes a tassel is attached to the hilt. During the Ming Dynasty these were usually passed through an openwork pommel, and in the Qing through a hole in the grip itself; modern swords usually attach the tassel to the end of the pommel. Historically these were likely used as lanyards, allowing the wielder to retain the sword in combat. There are some sword forms which utilize the tassel as an integral part of their swordsmanship style (sometimes offensively), while other schools dispense with sword tassels entirely. The movement of the tassel may have served to distract opponents, and some schools further claim that metal wires or thin silk cords were once worked into the tassels for impairing vision and causing bleeding when swept across the face. The tassel's use now is primarily decorative.[3][4]

The blade itself is customarily divided into three sections for leverage in different offensive and defensive techniques. The tip of the blade is the jiànfeng, meant for stabbing, slashing, and quick percussive cuts. The jiànfeng typically curves smoothly to a point, though in the Ming period sharply angled points were common. Some antiques have rounded points, though these are likely the result of wear. The middle section is the zhongren or middle edge, and is used for a variety of offensive and defensive actions: cleaving cuts, draw cuts, and deflections. The section of blade closest to the guard is called the jiàngen or root, and is mainly used for defensive actions; on some late period jian, the base of the blade was made into an unsharpened ricasso. These sections are not necessarily of the same length, with the jiànfeng being only three or four inches long.[5][6]

Jian blades generally feature subtle profile taper (decreasing width), but often have considerable distal taper (decreasing thickness), with blade thickness near the tip being only half the thickness of the root's base. Jiàn may also feature differential sharpening, where the blade is made progressively sharper towards the tip, usually corresponding to the three sections of the blade. The cross-section of the blade is typically that of a flattened diamond with a visible central ridge, though some are lenticular (eye-shaped) instead; ancient bronze jian sometimes have a hexagonal cross-section. 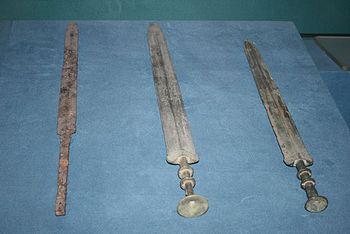 Jian were originally made from bronze, then steel as metal technology advanced. There are some, perhaps ceremonial, jian which are carved from a single solid piece of jade.

Traditional jian blades are usually of sanmei (three plate) construction, which involved sandwiching a core of hard steel between two plates of softer steel. The central plate protrudes slightly from its surrounding pieces, allowing for a sharp edge, while the softer spine protects the brittle core. Some blades had wumei or five plate construction, with two more soft plates being used at the central ridge.[7] Bronze jian were often made in a somewhat similar manner: in this case an alloy with a high copper content would be used to make a resilient core and spine, while the edge would be made from a high tin-content alloy for sharpness and welded on to the rest of the blade.

The sword smiths of China are often credited with the forging technologies that traveled to Korea and Japan to allow sword smiths there to create such weapons as the katana. These technologies include folding, inserted alloys, and differential hardening of the edge.[8][9] While the Japanese would be more influenced by the Chinese dāo (single-edged swords of various forms), the early Japanese swords known as ken are often based on jian. The Korean version of the jian is known as the geom or gum, and these swords often preserve features found in Ming-era jian, such as openwork pommels and sharply angled tips.

In martial art schools wooden swords are used for training, so most martial arts students' first experience with a jian in modern times is with one of those weapons. In some religious Taoist sects, those wooden practice swords have come to have an esoteric ritual purpose, claimed by some to metaphorically represent the discipline of an accomplished student.

Contemporary jian versions are often forged (shaped with heat and hammer) and assembled by mostly traditional methods for training of practitioners of Chinese martial arts around the world. These jian vary greatly in quality and historical accuracy.

Contemporary jian are also sometimes forgeries (artificially aged and misrepresented as original antiques), for sale to tourists and collectors who cannot distinguish them from true antiques.

The first jian used in China were little more than bronze double-edged daggers primarily created for close fighting in closed packed environments such as small towns and cities where spears and polearms might prove inconvenient. By that time, jian swords were made from varying lengths to modern lengths by roughly 500 BCE. Though there is significant variation in length, balance, and weight of the jian from different periods, within any given period the general purpose of the jian is to be a multipurpose cut and thrust weapon capable of stabbing, as well as making both precise cuts and slashes, as opposed to specializing in one form of use. Although the many forms and schools of swordsmanship with the jian vary as well, the general purpose and use is still not lost.

Wushu jian pair event at the 10th All China games

Historical jian wielders would engage in test cutting called shizhan, practicing their skills on targets known as caoren, or "grass men". Such targets were made from bamboo, rice straw, or saplings. This practice was similar to the Japanese art of tameshigiri, but was never formalized to the extent that the latter art was.[10]

Today many Chinese martial arts such as taijiquan and their martial artists still train extensively with jian and expertise in its techniques is said by many of them to be the highest physical expression of their kung fu. However, most jian today are flexible tai-chi or wushu jian used mainly for ceremonial purposes and not for actual combat. Famous jian forms include San Cai Jian (三才劍) and Kun Wu Jian (崑吾劍). 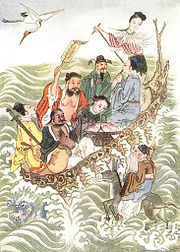 "The Eight Immortals Crossing the Sea."[11] The figure on the lower left wears a jian on his back

There are several Taoist immortals who are associated with the jian. One example is Lü Dongbin. The bodhisattva Mañjuśrī (Ch: 文殊 Wénshū) is often depicted holding a jian, which is then referred to as the "sword of wisdom".

Jian frequently appear in wuxia fiction and films. The swords or the techniques used to wield them may be effectively or explicitly supernatural,[12] and the quest for such swords or techniques may be a major plot element.

In a duel scene in the film Crouching Tiger, Hidden Dragon, the character Jen Yu (Zhang Ziyi) destroys every weapon that her opponent Shulien (Michelle Yeoh) wields in turn, including three out of the four major weapons of Chinese martial culture -- the single-edged sword or Dao; the spear or Qiang; and the staff or Gùn -- but is finally defeated by the use of the fourth major weapon, a Jian. (A pair of hook swords and a Monk's spade are also destroyed.)