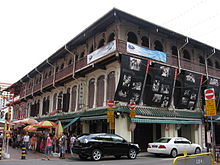 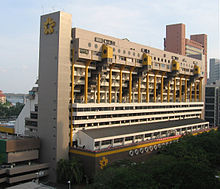 Esplanade - Theatres on the Bay

The architecture of Singapore displays a range of influences and styles from different places and periods. These range from the eclectic styles and hybrid forms of the colonial period to the tendency of more contemporary architecture to incorporate trends from around the world. In both aesthetic and technological terms, Singapore architecture may be divided into the more traditional pre-World War II colonial period, and the largely modern post-war and post-colonial period.

Traditional architecture in Singapore includes vernacular Malay houses, local hybrid shophouses and black and white bungalows, a range of places of worship reflecting the ethnic and religious diversity of the city-state as well as colonial civic and commercial architecture in European Neoclassical, gothic, palladian and renaissance styles.

Modern architecture in Singapore began with the transitional Art Deco style and the arrival of reinforced concrete as a popular building material. International Style modern architecture was popular from the 1950s to the 1970s, especially in the public housing apartment blocks. The Brutalist style of architecture was also popular in the 1970s. These styles coincided with the great urban renewal and building boom periods in Singapore history, and consequently these are the most common architectural styles seen on the island. Some of the more architecturally significant works of this period include Pearl Bank Apartments by Tan Cheng Siong, and the People's Park Complex and Golden Mile Complex by Design Partnership.

Post-modern architecture experiments, in both the 'historicist' and deconstructivist modes made an appearance in the 1980s, though the style was relatively muted in its expression. Another architectural trend has been the rediscovery of Singapore's architectural heritage, leading to an active conservation programme as well as a booming industry in the restoration of historic buildings, often adapting them to new uses. A recent example is the National Museum of Singapore.

An important area of local innovation has involved seeking to develop a form of modern architecture appropriate to Singapore's tropical climate. This climatically sensitive approach to architecture traces its roots back to the vernacular Malay houses and through to experiments by British colonial architects and early local nationalist architects to devise an authentically local architecture using modern construction methods. In the 1980s and especially from the late 1990s, this has led to a proliferation of what might be called 'modern tropical' architecture, or neo-tropical architecture. It involves a return to clean and simple rectilinear modernist forms, coupled with an emphasis of lush landscaping and sleek sun-shading in the form of metal or wood louvres, instead of the modernist glass curtain wall, which admits and traps solar heat. These architectural efforts have taken on a new relevance and urgency due to concerns about global warming, climate change and environmental sustainability, especially given that air conditioning in buildings is one of the largest consumers of electricity in Singapore, which is mostly generated by fossil fuels.

From the late 1990s, like many other global cities and aspiring global cities, the Singapore government consciously launched a drive to develop 'iconic' landmarks in the city, as a means to strengthening the Singapore brand identity as well as to attract foreign tourists, skilled immigrants, investements and buzz. Several such landmark projects have since been developed, sometimes through open or closed architectural design competitions. These include the Esplanade - Theatres on the Bay arts centre, the Supreme Court of Singapore, the new National Library, Singapore, the Marina Bay Sands Integrated Resort and the Singapore Flyer. 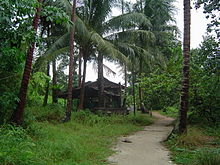 Prior to the British establishment of a settlement in 1819, architecture followed the pattern of the surrounding region. Vernacular architecture comprised village (or 'kampong') houses built in the Malay tradition. Malay kampong houses were built on stilts and raised above the ground (or water, depending on their location). The house was erected around a skeletal structure of tropical hardwood posts and beams, usually cengai. Medium hardwoods, like meranti, were used as floor boards, roof rafters and door and window frames. The roof itself was made of layers of palm frond thatch, while the walls were either made of woven bamboo strips or meranti planks. The basic form of the house was simple, but additional rooms could be added according to the requirements and wealth of the family. Likewise, the architectural ornament, in the form of carved wood fascia boards, screens and panels, could be quite elaborate.

Apart from this domestic rural architecture, there is evidence that more classical type buildings may have been built on the island. A nearby example of similar classical Hindu-Buddhist Malay architecture is Candi Muara Takus in the Riau province of Sumatra. Like the Singapore example, it also featured the use of sandstone as well as terraces. Stone foundations on Fort Canning Hill were discovered by the British soon after they arrived. Although they have since been destroyed and removed, the officials who discovered them speculated they were part of Hindu or Buddhist temples and/or a royal palace. The superstructure of these buildings would have been timber (as suggested by holes found in the foundations). However, these had long since disappeared by the time the foundations were discovered in 1819. Apart from some archaeological fragments, like jewellery, porcelain, coins and an inscribed stone, there few material artifacts from the pre-colonial period, and no buildings or even ruins remaining today. 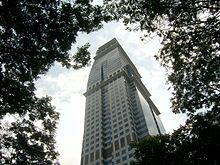 Soon after the British established a settlement near the mouth of the Singapore River in 1819, changes came to way the buildings were constructed in Singapore. Despite its small initial size, the new settlement had decidedly urban characteristics and ambitions. Merchants built their warehouses right next to each other along Boat Quay, which was the main port area. However, the close proximity of these buildings as well as the value of the goods stored within them, raised concerns about the threat of fire, especially given the flammable nature of the traditional building materials (timber floors and walls with thatch roofs). Consequently, a switch was made within the first decade to build all urban buildings in brick masonry with clay tiled roofs, to reduce the fire hazard. Bricks and tiles were manufactured at kilns on the island, while the mortar and plaster used was made by grinding up corals from sea around Singapore. 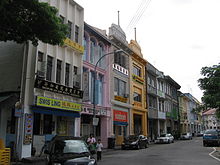 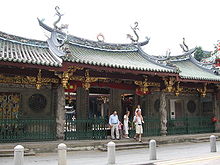 Another prominent category of buildings in the colonial period were places of worship. As a multi-religious port-city, with migrants from all over the world, a variety of different immigrant communities lived and worked in Singapore. These groups often banded together to raise funds to erect their own places of worship, including a variety of syncretic Chinese temples, Hindu temples, Sikh temples, Jewish synagogues, Catholic, Protestant and Orthodox Christian Churches as well as Sunni and Shia mosques.

Apart from being devoted to the various schisms and sects within each religious tradition, these buildings were often built to serve ethnic groups and sub-groups. For examples, while most Muslims in Singapore were and are Malay, some mosques were built in the South Indian style to serve Tamil Muslims. Likewise, several churches were built in a distinctly Chinese style, serving ethnic Chinese congregations.

Several of the oldest and most important places of worship in Singapore have been designated National Monuments of Singapore, and they include the Armenian Church, Thian Hock Keng Temple, Sultan Mosque, Sri Mariamman Temple, Jamae Mosque and Telok Ayer Chinese Methodist Church, amongst others. 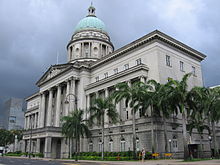 Another important group of historic buildings were those built by the colonial government. These were often built in one or another European architectural style, which was in fashion at the time, such as the Palladian, Renaissance, or Neoclassical styles. Some of the more important buildings included the Victoria Theatre and Concert Hall, the Fullerton Building, old Supreme Court Building, City Hall, Singapore, National Museum of Singapore, old Hill Street Police Station, Central Fire Station, old Raffles Institution buildings, Changi Prison, old NCO club and numerous other schools, post offices, military camps and police stations around the island. 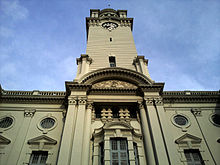 Major commercial buildings, often erected by European businesses as well as mission schools and other civic groups, also adopted these styles, such as the Raffles Hotel, Convent of the Holy Infant Jesus (now CHIJMES), old St Joseph's Institution and old Tao Nan School. Often the approach to matters of style was highly eclectic, and builders combined a variety of stylistic elements from various European, and some non-European, sources in the same building. Many colonial-era buildings are still found in the city, as a result of aggressive conservation efforts of Singapore's built heritage since the 1980s. 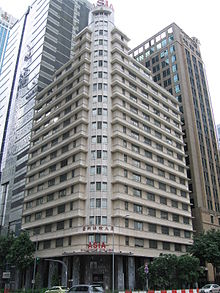 Singapore has a wealth of Art Deco architecture, dating mainly from the 1920s and 1930s. The style was especially popular in commercial architecture, like factories and offices. Often, Art Deco style ornaments and elements were applied onto otherwise typical shophouses or bungalows. In other cases, Art Deco was applied to newly emergent types of buildings, like Kallang Airport (by the Public Works Department), the Ford Factory (by Emile Brizay) or Singapore's first skyscrapers, the Cathay Building (by Frank Brewer) and the Asia Insurance Building (by Ng Keng Siang). Features of this style in the local context included a penchant for inscribing the date of the erection of the building prominently on its facade, the use of projecting horizontal fins as sun shading devices over windows and the use of flagpoles. Quite apart from the aesthetics of this style, the Art Deco period also marked the introduction of modern construction technologies like reinforced concrete in Singapore.

Following the Neoclassical and Art Deco phases, Singaporean architecture moved in a decidedly modern direction after the war. Post-war austerity encouraged the use of clean, stark and simple modernist forms and surfaces devoid of ornament. Modern architecture was also preferred for the many 'cookie-cutter' or standardised design public buildings being built at the time, such as schools, clinics, factories and especially public housing. 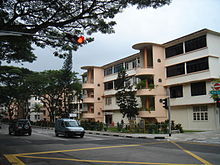 Public housing architecture in Singapore dates back to the 1930s with the Singapore Improvement Trust (SIT), a colonial government agency, embarked on a building programme to address a shortage of affordable housing in Singapore. Initially, the SIT focussed on housing middle and lower-middle class Asians. The most prominent example of their pre-war efforts was the Tiong Bahru estate, where many low-rise, four-storey Art Deco style apartment blocks, shops, markets and other amenities were built on the city fringe. This programme continued after the war, with the Art Deco style exchanged for a simple modern aesthetic. Although the estate was popular and praised for spacious and green communal areas as well as attractively designed blocks, the rate of construction was slow in relation to the scale of the housing shortage in Singapore.

After the People's Action Party came to power in 1959, it embarked on a massive public housing programme, which was one of its signature campaign promises. It replaced the SIT with the Housing and Development Board (HDB). The HDB was given the legal tools and financial resources needed to make great progress in speeding up the building of public housing. Architecturally, this resulted in a relatively homogenous suburban landscape, where satellite new towns (modelled after the British), were built with seemingly endless stacks of slab blocks housing tens of thousands of peoples in small two and three bedroom flats. 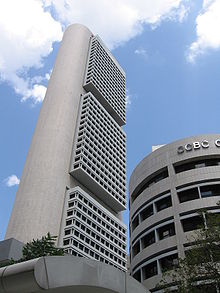 From the 1970s to late 1980s the city was dominated by modern architecture, particularly the brutalist style. This is seen in some of the older commercial buildings, such as the OCBC Centre by I. M. Pei, as well as many buildings built to house governmental offices and government-linked companies, including the Singapore Land Tower, Temasek Tower, DBS Building, and the CPF Building. Changing international architectural trends introduced some architectural styles (particularly the postmodernist style) here.