Monroe is featured as a disturbed babysitter watching a child at the same New York hotel where a pilot (Widmark) is staying. Her strange behavior makes him increasingly aware that Nell is the last person the parents (played by Jim Backus and Lurene Tuttle) should have entrusted with their daughter.

Lyn Lesley, the bar singer at New York's McKinley Hotel, frets about the impending arrival of her boyfriend, airline pilot Jed Towers. Lyn had mailed Jed a letter ending their six-month relationship, and when Jed questions her, she explains that she is leaving him because he lacks an understanding heart.

Meanwhile, elevator operator Eddie introduces his shy niece, Nell Forbes, to guests Peter and Ruth Jones as the babysitter he has arranged for their daughter Bunny. The Joneses, who are dining in the hotel's banquet hall, bid goodnight to Bunny.

Nell is worried about her lack of experience. After the child falls asleep, Nell goes into the other room and dons a lacy negligee belonging to Ruth, as well as some of her perfume and jewelry. Jed, whose room is across the courtyard, can see Nell through the window.

He calls the voluptuous blonde on the telephone. While she is intimidated by Jed's seductive tone, Nell is also intrigued, but their conversation is interrupted by Eddie, who is checking on Nell. He orders her to remove Ruth's apparel. When she protests, Eddie soothes her by saying that she can obtain such luxuries for herself by finding another boyfriend to replace the one who was killed. Eddie then leaves, and Nell invites Jed to come over. 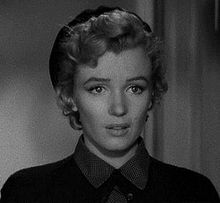 Jed is bewildered by her hesitant, yet flirtatious demeanor, as well as by her inconsistent explanations about her presence in the hotel. Nell is startled when Jed states that he is a pilot. She confides that boyfriend Philip died while flying over the Pacific.

Bunny interrupts them, whereupon Nell shakes the child and orders her to return to bed. Feeling sorry for Nell, who has been in New York for only a month, Jed acquiesces to her plea for him to stay. He also comforts the crying Bunny, although when Bunny looks out the window, it appears that Nell is about to push her. Jed rescues the girl, the incident being witnessed by Emma Ballew, a nosy, long-term resident.

Nell escorts the child to bed, then accuses Bunny of spying on her and warns her not to make any noise. Jed has decided to seek Lyn's forgiveness, but Nell again begs him not to leave. As he is refusing a kiss from her, Jed sees scars on her wrists. Nell confesses that after Philip died, she tried to kill herself with a razor.

Eddie again comes to check on Nell. Jed hides in the bathroom to avoid a confrontation. Eddie is irate that Nell is still wearing Ruth's things. He chastises her, saying he had thought that Nell was "getting better." Eddie orders her to change clothes, then harshly rubs off her lipstick. The action enrages Nell, who accuses Eddie of being just like her repressive parents, then hits him over the head with a heavy ashtray.

Almost in a trance, Nell goes into Bunny's room as Jed tends to Eddie's wound. Nell returns and is confronted by the Ballews, who are suspicious of the child's cries they have heard. Fearing for his job, Eddie persuades Jed to hide in the bathroom, but while Nell is talking with the neighbors, Jed sneaks into Bunny's room. He does not notice that Bunny is now bound and gagged. When the Ballews see him leave, they assume that Jed had forced his way in and was holding Nell captive.

The Ballews notify the hotel detective. Nell, who is now so deluded that she believes Jed is Philip, locks Eddie in the closet and goes into Bunny's room. In the bar, Jed tells Lyn about Nell. She is surprised by his sympathetic reaction.

Suddenly realizing that Bunny was on the wrong bed, Jed rushes up to the room, where Nell, believing that Bunny drove Jed away, is about to hurt the girl. Ruth Jones arrives first to check on her daughter and is attacked by Nell. Jed rushes in and pulls Nell away from Ruth, but she slips away as he unties Bunny.

Jed releases Eddie from the closet, Eddie admits that Nell had spent the previous three years in a mental institution following her suicide attempt. Jed then searches for the missing Nell and finds her in the lobby, where she is threatening to kill herself with a razor. Still believing that he is Philip, Nell is baffled by Jed's attempts to help her, but his soothing tone induces her to give him the razor. Seeing that Jed has an understanding heart after all, Lyn reconciles with him as Nell is led away to a hospital.

This was Anne Bancroft's first film. It was Monroe's 18th and an attempt to prove to critics that she could act. The working titles of the film were Mischief and Night Without Sleep, the latter of which was the release title of another 1952 Twentieth Century-Fox film. Dorothy McGuire was originally cast as the picture's star, with Jules Dassin set to direct.

This movie marked the first time Monroe and composer Lionel Newman worked together in the same movie. The title credit music was used previously in the film Panic in the Streets (1950).