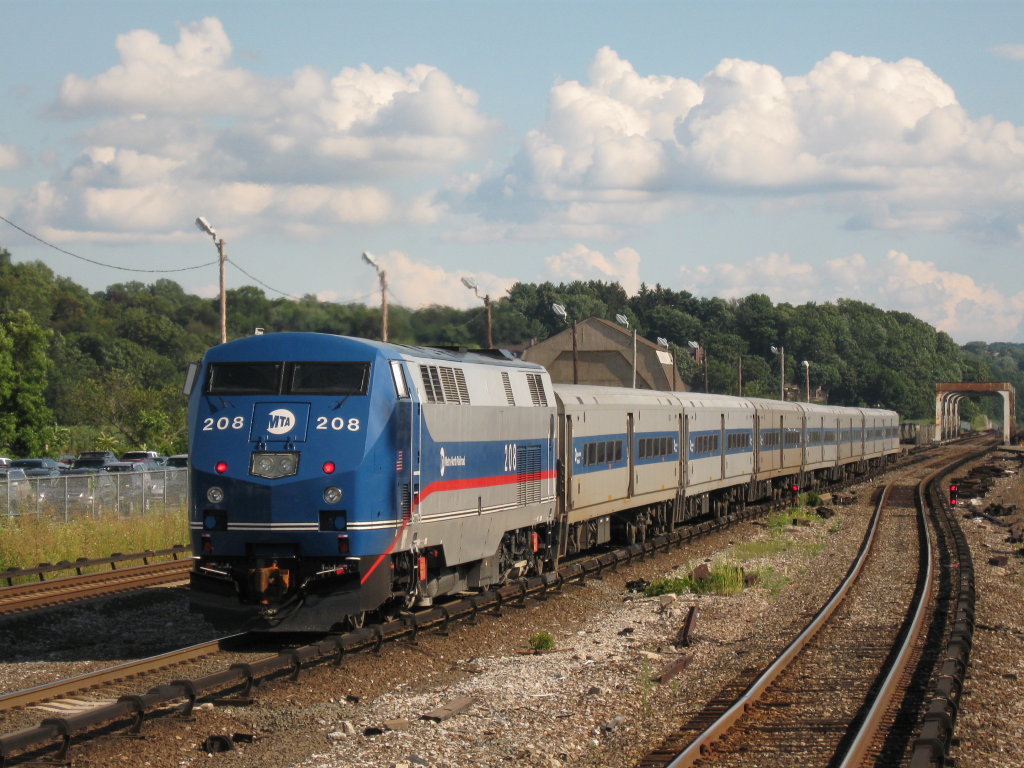 infobox rdt|Hudson Line (Metro-North)-infobox|
's Hudson Line is a line running north from along the east shore of the . Metro-North service ends at Poughkeepsie, with 's trains continuing north to and beyond Albany. The line was originally the (and the south of Spuyten Duyvil), and later part of the famous Water Level Route of the .

The Croton-Harmon station divides the two segments of the line. South of there, it is electrified, with a , where it serves an stations located more closely together. Most of the electrified zone is served by four tracks, usually two express and two local tracks in each direction. In some sections, there are only three tracks.

North of Croton-Harmon, the line is mostly double-tracked, with a few three-track areas. The diesel trains that run to the more separated stops between Croton-Harmon and Poughkeepsie are generally express routes that skip most of the lower stations. From just north of Spuyten Duyvil to the end of the line, the Hudson Line is shared with 's various routes up the river.

Since the tracks continue north of Poughkeepsie, there have, over the years, been various proposals from both the MTA (Metro-North's parent agency), to extend service northwards. Most have been scotched after strong opposition from residents of northern Dutchess County, who fear the effect on their still largely-rural communities that being within an easy rail commute of would have. However, Poughkeepsie-area commuters have supported such plans since they would ease pressure on that station. As recently as January 2007, supervisors of some towns north of Poughkeepsie have expressed new interest in extending rail service. [http://www.utu.org/worksite/detail_news.cfm?articleid=32556]

The Metropolitan Transportation Authority leased the line south of Poughkeepsie from on , . [http://www.prrths.com/Hagley/PRR1972%20Jun%2005.pdf]

Despite its name, the Hudson Line does not reach the river until it has gone 11 miles (18 km) and six stations from Grand Central. Once along the river, however, the view is nearly constant, with it visible much of the way to Poughkeepsie. It is one of the more scenic routes of any commuter train.

Manhattan and the Bronx

Once past 125th Street and over the , the Hudson Line departs from the track shared with the Harlem and New Haven lines, passing first the employee-only Highbridge stop as it follows the river northward and, at first, the Major Deegan Expressway. Morris Heights, the first real station, offers convenient access to between the tracks and the river as the line follows a remaining section of the .

A new Yankee Stadium Station is planned south of University Heights. Between University Heights and Marble Hill, a spur of track, all that remains at this end of the "Old Put", splits off to the north. It is used by the commuter railroad for storage and repair of maintenance-of-way vehicles.

Marble Hill, technically in Manhattan despite being on the mainland, is an express stop and sees quite a bit of traffic since it offers an easy transfer to the of the at the Marble Hill–225th Street station. The subway is elevated over Broadway at this point. With the MNRR tracks down by the river requiring those detraining to climb stairs to street level, it is a rare instance where a commuter rail line is below a subway in elevation at a station or station where transfers are possible.A short curve away brings the trains to Spuyten Duyvil and its far lengther stairs to the street. Just past the station, the track rejoins the original Hudson River Railroad, shared with , and after one more stop at Riverdale is out of the city.

The Palisades present themselves across the river as trains pass through the city of Yonkers and its four stops, mostly local. Some express trains do stop at the recently-renovated Yonkers station, the first where a transfer to Amtrak (northbound only) is possible.

Smaller, local-only suburban stations are passed as the looms to the north and the river widens. Finally, between Ardsley and Tarrytown, it passes overhead. Rockland County fades to almost three miles (4.8 km) away across . But after passing through prison, the train reaches Ossining, where a ferry brings travelers across the wide river.

Electric trains end their runs one stop beyond, at Croton-Harmon, a sprawling, modern terminal shared again with Amtrak just south of Harmon Yard and east of . The tracks veer inland, closely following US 9, to the next and newest stop, Cortlandt, the only non-New York City station on the line where the Hudson River cannot be seen.

It reappears dramatically at Peekskill, the last stop in the county, where the can be seen to the north.

North of Peekskill the river abruptly narrows as the begin. Dunderberg and Bear mountains can be seen across the river. The train passes through two short tunnels, one under the abutment. Putnam County's first station, Manitou, is a flag stop serving a small hamlet. Just north of Garrison, there is another tunnel and then a wide panorama of the stone buildings of West Point; the quaint riverside village of Cold Spring is the next stop, last in the county.

The Dutchess County line is crossed in a pair of 842-foot (257 m) tunnels under at Breakneck Point; across the river Storm King looms. The Breakneck Ridge flag stop marks the end of the Highlands as the river once again broadens around . At Beacon, a stop that has become more popular since the opening of the art museum nearby, ferry service is available during peak hours to Newburgh, whose skyline dominates the view across the river, and shortly after leaving the train passes under the .

Just upriver is New Hamburg, a hamlet of the Town of Poughkeepsie and a station closed in the NYCRR days but eventually reopened. The last 8.5 miles to Poughkeepsie's ornate, recently renovated station, highlighted by the vast , is the longest distance between any two stations on a Metro-North main line.

Electric service from and to Croton-Harmon uses the standard M3 and M7 multiple units seen on the Metro-North Harlem line and the . 30 M1s remain in use, and can also appear in service on the Hudson line. Diesel trains are headed by Genesis P32AC-DMs. Since turning the locomotives around at either end of the line would be extremely cumbersome and time-consuming, trains use push-pull operation, with the locomotive usually on the north end of the train. They usually pull/push six or seven Shoreliner passenger cars, with a cab car at the southern end of the train.

The Genesises are mostly in Metro-North's sedate silver-and-blue colors, but sometimes the more striking red, black and white scheme inherited from the can be seen as equipment on the line is pooled with ConnDOT, whose red-striped passenger coaches are also in wide use on the Hudson Line. The Genesises will receive a new paint scheme this year. [http://www.subchat.com/read.asp?Id=414940]