Courland
This article is about the historical and cultural region of Kurzeme. For other uses, see Kurzeme. 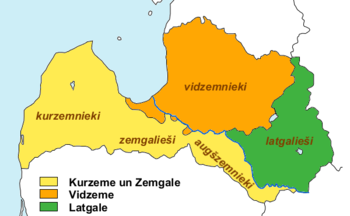 Historical regions of Latvia, together with Latvian cultural groups. 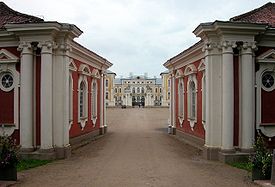 Entrance to the Rundale Palace, the seat of the Dukes of Courland.

Situated in western Latvia, it roughly corresponds to the counties of Kuldīga, Liepāja, Saldus, Talsi, Tukums and Ventspils.

When combined with Semigallia and Selonia, Courland's northeastern boundary is the river Daugava, which separates it from the regions of Latgale and Vidzeme. To the north, Courland's boundary is the Gulf of Riga. On the west it is bordered by the Baltic Sea, and on the south by Lithuania. It lies between 55° 45′ and 57° 45′ North and 21° and 27° East.

The area comprises 27,286 km² (10,535 sq.mi.), of which 262 km² (101 sq.mi.) is made up of lakes. The landscape generally has a low and undulating character, with flat and marshy coastlands. The interior features wooded dunes, covered with pine, fir, birch, and oak, with swamps and lakes, and fertile patches between. Courland's elevation never rises more than 213 m (700 ft) above sea level.

Nearly one hundred rivers drain Courland, but only three of these rivers – the Daugava, the Lielupe and the Venta–are navigable. They all flow northwestward and discharge into the Baltic Sea.

Owing to its numerous lakes and marshes, Courland has a damp, often foggy, and changeable climate, with severe winters.

The Livonian Confederation was a loosely organized confederation formed by the German-led Livonian Order and various bishoprics that encompassed much of present-day Estonia and Latvia. It existed from 1228 to the 1560s, when it was dismembered during the Livonian Wars. 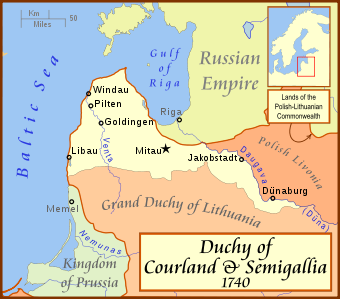 The Duchy was one of the smallest European nations to colonize overseas territories, establishing short-lived outposts on the Caribbean island of Tobago and at the mouth of the Gambia river in Africa.

In 1795, the last Duke, Peter von Biron, ceded the Duchy to the Russian Empire.

Courland as part of Russia

After annexation by Russian Empire the territory of the former Duchy formed the Courland Governorate.

From the time of the Northern Crusades in the early 13th century, most of land was owned by nobles descended from the German invaders. In 1863, the Russian authorities issued laws to enable Latvians, who formed the bulk of the population, to acquire the farms which they held, and special banks were founded to help them. By this means, some occupants bought their farms, but the great mass of the population remained landless, and lived as hired labourers, occupying a low position in the social scale.

Agriculture was the chief occupation, with the principal crops being rye, barley, oats, wheat, flax, and potatoes. The large estates conducted agriculture with skill and scientific knowledge. Fruit grew well. Excellent breeds of cattle, sheep and pigs were kept. Liepāja and Jelgava operated as the principal industrial centres, with ironworks, agricultural machinery works, tanneries, glass and soap works. Flax spinning took place mostly as a domestic industry. Iron and limestone were the chief minerals; a little amber was found on the coast. The only seaports were Liepāja, Ventspils and Palanga, there being none on the Courland coast of the Gulf of Riga.

Duchy of Courland and Semigallia (1918)

Courland as part of Latvia

After World War I, Courland became a part of the newly-formed nation of Latvia. In 1940 the USSR annexed the region, but Germany occupied it during World War II. With the dissolution of the Soviet Union, Courland became part of independent Latvia once more and it remains so to this day.

At the start of Operation Barbarossa in 1941, Courland, along with the rest of the Baltic area belonging to the Soviet Union, was overrun by Army Group North headed by Field Marshal Wilhelm Ritter von Leeb. In 1944, the Red Army lifted the siege of Leningrad and re-conquered the Baltic area along with much of Ukraine and Belarus. However, some 200,000 German troops held out in Courland. With their backs to the Baltic Sea. they were trapped in what became known as the Courland Pocket, blockaded by the Red Army and the Red Baltic Fleet. Colonel-General Heinz Guderian, the Chief of the German General Staff, insisted to Adolf Hitler that the troops in Courland should be evacuated by sea and used for the defense of the German Reich. Hitler refused, and ordered the Wehrmacht, Waffen-SS, Luftwaffe and Kriegsmarine forces in Courland to continue the defence of the area. Hitler believed them necessary to protect Kriegsmarine submarine bases along the Baltic coast. On January 15, 1945, Army Group Courland (Heeresgruppe Kurland) was formed under Colonel-General Dr. Lothar Rendulic. The blockade by elements of the Leningrad Front remained until May 8, 1945, when the Army Group Courland, then under its last commander, Colonel-General Carl Hilpert, surrendered to Marshal Leonid Govorov, the commander of the Leningrad Front (reinforced by elements of the 2nd Baltic Front) on the Courland perimeter. At this time the group consisted of the remnants of some 31 divisions. After May 9, 1945, approximately 203,000 troops of Army Group Courland began moving to Soviet prison camps in the East. The majority of them never returned to Germany (Haupt,1997).