I Can Do Bad All By Myself

I Can Do Bad All By Myself

Infobox Film
name = I Can Do Bad All by Myself 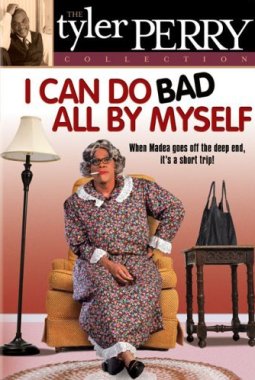 Vianne, a young woman who has a share of pain, moves in with her 68 year-old grandmother, , in order to escape her verbally abusive and cheating husband. Soon after her departure, she files for .

When becomes sick, (or rather, high) the family comes to her rescue, Vianne, Madea's granddaughter, also her granddaughter, Maylee, who also comes to visit her Daughter Keesha that "has been taking care of since she was eight years old. However, Maylee casually strolls in and announces that she is engaged to Vianne's ex husband, Anthony.

After an nearly violent argument at the dinner table, Vianne realizes that she has to let Anthony go. Even though they are divorced, he still has her in his heart. No sooner than she lets him go, she realizes that her hurt has consumed most of her life and she needs to change.

Bobby, a handy man and boarder who works for with Madea, immediately makes it known that he is interested in Vianne. Much to their reluctance, they start to spend time together and they realize, even though she was once a rich housewife and he, a lowly handy man and ex convict, that when "it's right, it's right". Although grandma has a few things to say about their relationship, she eventually encourages it. And Bobby realizes that he is in love with Vianne and he want her hand in marriage.

Meanwhile, Maylee finds out that her daughter Keesha got pregnant by some boy named Kelly and she's holding their child.But Keesha is only 15years old. But through prayer, they both come to an understanding and forgive one another. In a shocking twist of events, Maylee breaks all ties with Anthony and sends him packing.

Originally there was no Keisha and her solo "Motherless Child was not in the 2000 tour of I can do Bad..., but was later put into the 2002 revival/video taping of the show and the original Maylee(s) were Teresa Young(another member from "Kirk Franklin and the Family" who came along with Kisha Grandy and David and Tamela Mann) for the first part of the tour and Tosha Moore(former member of gospel trio "Trin-i-tee 5:7")who took over the role until the end of the tour

*Originally Maylee had a solo by the name of "Bye Baby" that took in the last scene when she broke up with Anthony but was cut out after Teresa Young left the show and was not included in the taping in 2002.

I can do bad all by myself - Vianne and Maylee(overture)

Let Me Hold You - Bobby

In the Name of Jesus - Cora

It's Gonna Be Hallelujah - Cora

God is the Answer - Cora, Maylee, Bobby, and Vianne

* In the beginning of the play, Keesha tells Madea and Vianne that Maylee came to her school "with a big, old wig and a mini skirt". Later in the production, however, Maylee herself said that she wore a dress (which was clearly "not" a mini skirt) to Keesha's school.

* The scene right before the song "Motherless Child" when Maylee is talking to Keesha, you can hear Anthony's voice coming from what sounds like the backyard. You can even "clearly" see Maylee talking out the door, too. However when she goes to "check on him", she is seen going upstairs.