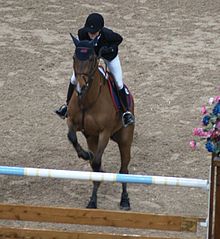 Baryard-Johnsson on Butterfly Flip in 2007

Malin Baryard (Malin Birgitta Barijard Johnsson, born 10 April 1975 in Söderköping, Östergötland, Sweden) is a Swedish equestrian, competing in show jumping.[1] Baryard started to ride at the age of six and went on to be a very accomplished show jumper.[2] She won a gold medal in the Swedish Championships at the age of just 14. She married Swedish TV presenter Henrik Johnsson in the summer of 2004, and made her TV-presenting debut in the autumn of 2004 on the SVT show Barbacka.