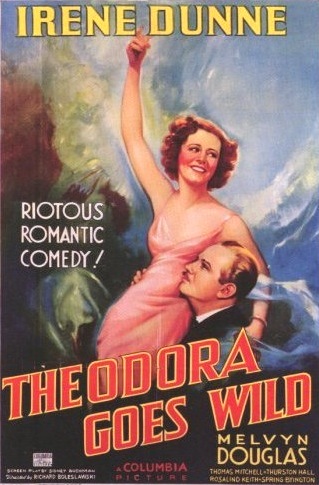 "Theodora Goes Wild" (fy|1936) is a comedy film which tells the story of a small town, incensed by a risqué novel, little knowing that it was written under a by a member of the town's leading family. It stars and . It was directed by and written by Mary McCarthy and .

It was nominated for for Best Actress in a Leading Role (Irene Dunne) and Best Film Editing.

Theodora Lynn () is a teacher and former church organist raised by two spinster aunts, Mary () and Elsie Lynn (Margaret McWade). She also happens to be, under the Caroline Adams, the secret author of a bestselling book that has the straitlaced Lynnfield Literary Circle in an uproar. When it is serialized in the local newspaper, the Circle, led by outraged busybody Rebecca Perry (Spring Byington), forces Jed Waterbury () to stop printing the salacious installments.

Theodora travels to on the pretext of visiting her uncle John (Robert Greig), but actually to see her publisher, Arthur Stevenson (). Though Stevenson reassures an anxious Theodora that only he and his secretary know her identity, his wife Ethel () pressures him into an introduction, which the book's illustrator, Michael Grant (), overhears.

Intrigued, Michael invites himself to dinner with the Stevensons and Theodora. Theodora becomes annoyed when Michael smugly assumes that she is a teetotaler, so she orders a . As the night goes on, she becomes drunk. So does Ethel, forcing Arthur to take his wife home and leaving Theodora alone with Michael. When he makes a pass at her, she panics and flees, much to his amusement.

He tracks her down to her hometown and blackmails her into hiring him as a gardener, scandalizing her aunts and providing Rebecca Perry plenty to gossip about. Michael declares that he is going to break Theodora out of her confining routine, ignoring her protests that she likes her life just the way it is. Despite herself, she enjoys herself very much when Michael makes her go berrypicking and fishing with him.

Finally, she gets up the nerve to tell the disapproving women of the Literary Circle that she loves him. When she tells Michael what she has done, he is less than thrilled. The next day, Theodora finds that he has gone away.

She tracks him down to his Park Avenue apartment. He admits he loves her, but then his father (), the Lieutenant Governor, shows up, followed by Michael's wife, Agnes (Leona Maricle). The estranged couple are only remaining married to avoid causing a political scandal for Michael's father.

Theodora determines to free Michael just as he had done for her. He wants her to hold off until his father's term ends, but she is unwilling to wait that long. To that end, she courts publicity. She finally crashes the Governor's ball and arranges for reporters to photograph her embracing Michael. Agnes seeks a divorce to avoid looking like a fool.

Theodora returns to Lynnfield and is warmly welcomed as a celebrity, even by her now-supportive aunts. She causes further talk when she brings a newborn baby with her. When Michael, now divorced, sees the child, he tries to flee, but then Theodora reveals that the baby belongs to Rebecca Perry's own secretly-married daughter.