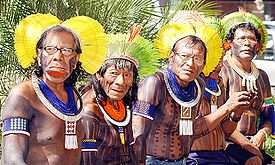 The Kayapo (Portuguese: Caiapó) people are the Gê-speaking native peoples of the plain lands of the Mato Grosso and Pará in Brazil, south of the Amazon Basin and along Rio Xingu and its tributaries.

Subgroups of the Kayapo include the Xikrin, Gorotire, Menkragnoti and Metyktire.[2] Their villages typically consist of a dozen huts. A centrally located hut serves as a meeting place for village men to discuss community issues.[3] They speak the Kayapo language. 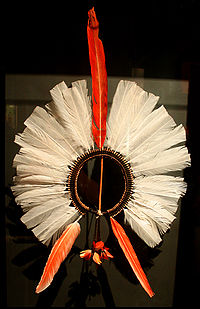 At one time, mining and logging threatened to destroy the rainforest, and thus their way of life. In retaliation, the Kayapo people used forceful tactics to banish loggers and miners in some areas, as well as to establish themselves as an economic force. Later, they were again threatened by secretive government plans to build a series of hydro-electric dams on their land. Under the leadership of Paulinho Paiakan, the Altamira Gathering was orchestrated by the Kayapo, drawing media attention worldwide. This demonstration, staged at the planned site for the first dam in Altamira, Pará, lasted several days and brought much pressure upon both the World Bank and the Brazilian government.[4]

In addition, the rock star Sting made an appearance at the demonstration. After which, but not because of, the World Bank denied the request for a loan which was to be used to build the dam. The Brazilian government backed out of the plans, as well.

The forest gives them houses, transport, food and medicine. The problem is that rivers are essential to their way of life and gold mining in Brazil is polluting the rivers, therefore, spreading diseases throughout the tribes. The majority of their food is grown in forest gardens, which are created by using a method called slash and burn. The men of the tribe cut the trees down, and the women burn what's left. The main crop grown is a potato-like plant called manioc. It is deadly poisonous at first and has to be mulched up then have its juices squeezed out, after this it is safe to eat, but in addition to this they also cook it. They eat it at every meal.

The Kayapo people use shifting cultivation, a type of farming where land is cultivated for a few years, after which the people move to a new area. New farmland is cleared and the old farm is allowed to lie fallow and replenish itself.[5]

The Kayapo get medicine from 650 different plants that they find around their village.[6]

They have trade agreements with The Body Shop.[7]