"This article is about the musician. For the English actor, see ."Infobox musical artist
Name = Anthony Jackson 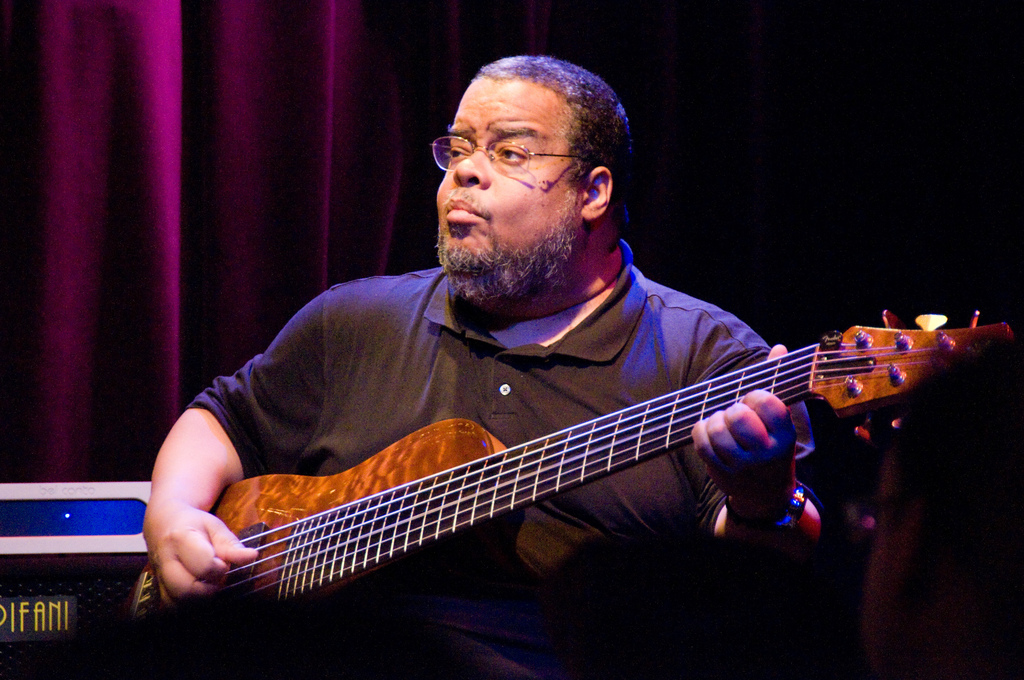 Anthony Jackson, (, ) is a Grammy-nominated American electric bass guitar player based in New York City. By those who know his playing, musicians and non-musicians alike, he is considered a master, who has furthered the technical and idiomatic boundaries of his instrument. He is seen by many to have added considerable legitimacy to the instrument in more jazz-related musical contexts, though he has had a career that has gone beyond that style.

Anthony Jackson has been a distinctive voice on the electric bass ever since he entered the scene in .He began learning the as a teen before switching to the , and finally picking up the bass after being influenced by legendary bassist "(see "Influences" below)". At age 18, Jackson became a working session musician, whose playing was eventually in high demand.

Most musicians familiar with Jackson’s playing know that he has a very particular style. This style can partly be attributed to Jackson’s musical influences. Jackson cites his main influences as
* – one of ’s most prominent bass players and the electric bass’ first virtuoso,
* of , and
* French composer .

Jamerson’s influence on Jackson is quite easily perceptible to anyone familiar with both players, particularly on Jamerson tracks like “” by and . The use of and for simultaneous chordal and ic expression and brief unison passages with the or other instruments are telltale.

Jackson is noted, amongst an array of unique stylistic facilities, for his ability to take inspiration from Jamerson – a motown player – and apply it in any stylistic context. Today the majority of Jackson’s non-commercial work is not any more instantly or obviously linkable to any of the motown recordings as it is to any other so called “genre,” except by the identifiable presence of Jamerson's influence.

Perhaps more of a surprise to some will be Jackson’s influence from .

“Casady, whom I'd first heard on 's album in late 1966, had a big, rich, metallic sound with a full bottom and a curious, guitaristic way of playing that I was immediately drawn to. When I saw him perform live, I was struck by his dignity and serious mien.”

says Jackson in a 1990 interview in "Bass Player" magazine. "(Note that this quote hints Jackson's fascination with the playing of the bass in relation to the guitar - see below.)" Casady played with a pick, which Jackson has also always had at least an ability for.

“It was Casady's sound that kept me exploring the expressive possibilities of using the pick. To this day, when I use one and a , Casady's influence emerges and can be clearly detected by an aficionado.”

Jackson’s other major influence is probably the one who is least expected to be a major influence of an electric bassist. Composer ’s music changed Jackson’s life “irrevocably and forever” in his own words. It was Messiaen’s organ suite “” that so impressed Jackson, who remarked that

“I hear the tritone as the central interval on which to build harmonies and melodies, as opposed to the major or minor third…The tritone interval has been extremely important to me from the first day I heard Messiaen playing his own music on organ.”

In listening to Jackson play, especially in freer contexts, one really can hear the tritone very frequently as he moves around the enormous 36” 28-fret six string fretboard of his .

Jackson and the Six String Bass

Jackson initially invented what has now caught on as the “,” - a bass guitar tuned B-E-A-D-G-C. His idea, which he called the , precedes any modern standard six string bass by at least twenty years.

Jackson said that the idea for adding more strings to what was previously the “Fender bass” came from a limited range and frustration with the decreased sonority and loss of upper range of de-tuned strings. When asked what he makes of criticism of the six-string, Jackson replies:

“Why is four [strings] the standard and not six? As the lowest-pitched member of the guitar family, the instrument should have had six strings from the beginning. The only reason it had four was because was thinking in application terms of an upright bass, but he built it along guitar lines because that was his training. The logical conception for the bass guitar encompasses six strings.”

Though Jackson came up with the idea some years previously, and first approached various s about the construction of his idea in about 1974, he began playing the six string bass exclusively in 1981. Carl Thompson built the first 6-string for Jackson in 1975. But he later switched to basses built by Vinnie Fodera and Joey Lauricella.

Jackson actually began music playing , and in fact studied with renowned jazz guitarist , but, as he puts it,

“I continued playing standard as well as bass guitar until 1968, when I was forced to admit that my standard guitar playing should be quietly put to death.”

This initial exposure to the guitar and later transfer to the bass were a significant part of what determined Jackson’s attitude to the bass: that it is also a guitar, and simply the lowest member of the guitar family of instruments, and not simply a louder, easier, solid-body version of the upright bass, built by a guitar builder for upright players.

Judging by numerous album sleeve notes, in which Jackson is credited as playing the “,” as opposed to simply “bass,” or “electric bass.”, Jackson seems to believe in the continuing importance of the link between the electric bass and the guitar, though he would be unlikely to deny that the actual role of his instrument is quite different from that of a traditional guitar.The way in which he has talked about the instrument, especially in the context of his innovation of it, suggests comparison with the relationship between other instruments that share a family, such as viola and cello, though these instruments are also sonically much more similar, much more like the upper notes of a piano versus the lower. The electric bass was, as Jackson sees it, made in terms of the upright bass for marketing reasons, though it is really a guitar.

For the Love of Money

After joining Billy Paul's band, Jackson started working with 's . One day during the fall of 1973, while keyboardist was leading the members of the MFSB rhythm section and Jackson through a rehearsal of '', owner/engineer noticed that Jackson had a wah wah pedal attached to his Fender Precision bass.

Tarsia decided to run Jackson's bassline through a phaser, giving it a swishing sound &mdash; and during the final mixing of the track, Kenny Gamble impulsively reached over to the echo button and added an echo effect to Jackson's opening riffs. 'For the Love of Money' went to number three R&B and number nine pop in the spring of 1974. Radio stations gladly played the over seven minutes long album version. The song has since been used in the opening sequence of 's 2004 hit TV show "the Apprentice"