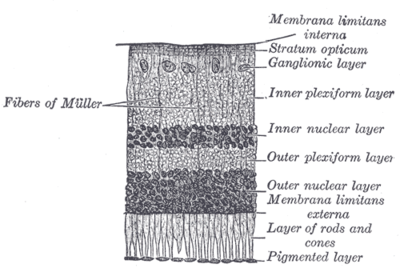 Compared to the rods and cones, the ipRGC respond more sluggishly and signal the presence of light over the long term.[2] They represent a small subset (~1-3%) of the retinal ganglion cells. Their functional roles are non-image-forming and fundamentally different from those of pattern vision; they provide a stable representation of ambient light intensity. They have at least three primary functions.

Photosensitive ganglion cells are also responsible for the persistence of circadian and pupillary light responses in mammals with degenerated rod and cone photoreceptors, such as humans suffering from retinitis pigmentosa.

Recently photoreceptive ganglion cells have been isolated in humans where, in addition to the above functions shown in other mammals, they have been shown to mediate a degree of light recognition in rodless, coneless subjects suffering with disorders of rod and cone photoreceptors.[3] Work by Farhan H. Zaidi and colleagues showed that photoreceptive ganglion cells may have a visual function and can be isolated in humans.

The photopigment of photoreceptive ganglion cells, melanopsin, is excited by light mainly in the blue portion of the visible spectrum (absorption peaks at ~480 nanometers[4]). The phototransduction mechanism in these cells is not fully understood, but seems likely to resemble that in invertebrate rhabdomeric photoreceptors. Photosensitive ganglion cells respond to light by depolarizing and increasing the rate at which they fire nerve impulses. In addition to responding directly to light, these cells may receive excitatory and inhibitory influences from rods and cones by way of synaptic connections in the retina.

In 1991 Russell G. Foster and colleagues including Ignacio Provencio discovered a non-rod, non-cone photoreceptor in the eyes of mice where it was shown to mediate circadian rhythms, i.e. the body's 24-hour biological clock.[5] Foster was elected a fellow of the Royal Society in 2008.[6] The fact that such a landmark discovery was published in a relatively obscure science journal indicates the initial skepticism within the scientific community about the existence of non-rod, non-cone photoreceptors. That community continued for several years to believe that the only photoreceptors were rods and cones. As Foster himself notes, the eye had been the subject of detailed study for a continuous period of over 200 years, so at the time it seemed unlikely that researchers could have missed this receptor's existence, its functions, and its ramifications.[7] But miss it they did and it fell to contemporary researchers to make the landmark discoveries in the field. These novel cells express the photopigment melanopsin which was first identified by Provencio and colleagues who published in the Journal of Neuroscience in 2000.[8] Major advances in the field would henceforth only be published in major biology and science journals, reflecting the gradual acceptance of the novel receptor by the scientific community.

Robert Lucas and colleagues including Russell Foster were the first to show conclusively that cells containing the photopigment melanopsin absorb light maximally at a different wavelength than those of rods and cones.[9] Lucas, Foster and colleagues also discovered that in mice the non-rod, non-cone photoreceptor had a role in initiating the pupil light reflex and not only circadian / behavioural functions as previously thought, though the latter were also demonstrated by them using genetically engineered rodless, coneless mice.[9] Samer Hattar and colleagues including David Berson in 2002 showed that in the rat, intrinsically photosensitive retinal ganglion cells invariably expressed melanopsin, and so melanopsin (and not rod or cone opsins) was most likely the visual pigment of phototransducing retinal ganglion cells that set the circadian clock and initiated other non-image-forming visual functions.[10] This work is regarded by Current Biology, New Scientist and various other commentators as representing the discovery that the identity of the non-rod, non-cone photoreceptor in mice was a class of retinal ganglion cells (RGCs).[11] This was highly significant anatomically; ganglion cells reside in the inner retina, while classic photoreceptors (rods and cones) inhabit the outer retina. There are thus two parallel and anatomically distinct photoreceptor pathways.

In the same year, 2005, Melyan and Qiu together with colleagues including Lucas, Mark W. Hankins and Berson, showed that the melanopsin photopigment was the phototransduction pigment in ganglion cells.[12][13] Dennis Dacey with colleagues including Paul Gamlin showed in a species of Old World monkey that giant ganglion cells expressing melanopsin projected to the lateral geniculate nucleus (LGN).[14][15] Previously only projections to the midbrain (pre-tectal nucleus) and hypothalamus (supra-chiasmatic nuclei, SCN) had been shown. However a visual role for the receptor was still unsuspected and unproven.

Attempts were made to hunt down the receptor in humans. But humans posed special challenges and demanded a new model - for unlike in animals, extensive ethical issues meant rod and cone loss could not be induced genetically or with chemicals so as to directly study the ganglion cells. For many years, only inferences could be drawn about the receptor in humans, though these were at times pertinent.

In 2007 the breakthrough came when Zaidi and colleagues including Foster, George Brainard, Charles Czeisler and Steven Lockley, having teamed up with other researchers on both sides of the Atlantic, published their pioneering work using rodless, coneless humans. Current Biology subsequently announced in their 2008 editorial, commentary and despatches to scientists and ophthalmologists, that the non-rod, non-cone photoreceptor had been conclusively discovered in humans using landmark experiments on rodless, coneless humans by Zaidi and colleagues.[11] The 2007 discovery of the novel receptor in humans, as well as the spectacular discovery, made alongside, that it mediated conscious sight, was trumpeted by Cell Press, New Scientist, and other science commentators in 2007.[16][17][18] The identity of the non-rod, non-cone photoreceptor in humans was found to be a ganglion cell in the inner retina exactly as previously shown in rodless, coneless models in some other mammals. The work was done using patients with rare diseases that wiped out classic rod and cone photoreceptor function but preserved ganglion cell function.[18][19][20] Despite having no rods or cones, the patients continued to exhibit circadian photoentrainment, circadian behavioural patterns, melatonin suppression, and pupil reactions, with peak spectral sensitivities to environmental and experimental light matching that for the melanopsin photopigment. Their brains could also associate vision with light of this frequency. Jacob Schor comments that in addition to being an outstanding example of collaboration between different countries, as well as between clinicians and scientists, interest thenceforth started to be shown by clinicians including ophthalmologists with a view to understanding the new receptor's role in human diseases and as discussed below, blindness.[21]

The use of rodless, coneless humans allowed another possible role for the receptor to be studied. In 2007, a new role was found for the photoreceptive ganglion cell. Zaidi and colleagues including Foster, Brainard, Czeisler and Lockley, showed that, at least in humans, the retinal ganglion cell photoreceptor contributes to conscious sight as well as to non-image-forming functions like circadian rhythms, behaviour and pupillary reactions.[3] Humans were the perfect model in which to prove this function as they can describe sight readily to an observer, which animals cannot do. Hence the receptor by its location anatomically in the inner retina as shown by these researchers was the first cell to perceive light giving rise to vision. Since these cells respond mostly to blue light, it has been suggested that they have a role in mesopic vision[citation needed] and that the old theory of a purely duplex retina with rod (dark) and cone (light) light vision was simplistic. Zaidi and colleagues' work with rodless, coneless human subjects hence also opened the door into image-forming (visual) roles for the ganglion cell photoreceptor.

The discovery that there are parallel pathways for vision was made - one classic rod and cone-based arising from the outer retina, the other a rudimentary visual brightness detector arising from the inner retina and which seems to be activated by light before the other.[3] Classic photoreceptors also feed into the novel photoreceptor system, and colour constancy may be an important role as suggested by Foster. Like many of the key discoveries about the new receptor, the work by Zaidi and colleagues shatters hundreds of years of what science thought it knew about the most basic functions of the eye and vision.

The authors on the rodless, coneless human model summarised their landmark paper noting for the first time that the receptor could be instrumental in understanding many diseases including major causes of blindness worldwide such as glaucoma, a disease which affects ganglion cells. Study of the receptor offered potential as a new avenue to explore in trying to find treatments for blindness. It is in these discoveries of the novel photoreceptor in humans and in the receptor's role in vision, rather than its non-image-forming functions, where the receptor may have the greatest impact on society as a whole, though the impact of disturbed circadian rhythms is another area of relevance to clinical medicine.

Most work suggests that the peak spectral sensitivity of the receptor is between 460 and 484 nm. Lockley et al. in 2003 showed that 460 nm (violet) wavelengths of light suppress melatonin twice as much as 555 nm (green) light, the peak sensitivity of the photopic visual system. In work by Zaidi, Lockley and co-authors using a rodless, coneless human, it was found that what consciously led to light perception was a very intense 481 nm stimulus; this means that the receptor in visual terms enables some rudimentary vision maximally for blue light.[3] A potential criticism that the responses could have been due to the perception of heat would be misplaced, as heat is dissipated at lower frequencies and would cause the sensation of greatest response with long wavelength (yellow and red) light, and not with short wavelength blue light as the researchers found.