The village is on the north bank of the River Clyde immediately to the north of the Forth and Clyde Canal, three miles from Clydebank on the road to Dumbarton. The Great Western Road runs through Old Kilpatrick, and the next village to its west is Bowling. The modern A82 trunk road runs to the north of Old Kilpatrick, between the village and the foot of the Kilpatrick Hills. There is a myth that it was the birthplace of Saint Patrick. Saint Patrick's Well is located here.

The western end of the Antonine Wall was at Old Kilpatrick (the eastern end, 59 km distant was at Bridgeness on the Forth). The physical traces of the wall had been erased but the route was surveyed during the 18th century and traced to the Chapel Hill where various Roman artifacts were found.[2]

When the Forth and Clyde Canal was being dug in 1790 the remains of a bathhouse were discovered. In 1913 the foundations of the fort which had been conjectured as being in the vicinity were confirmed; in the Ravenna Cosmography, an ancient map, this site was called "Clotagenium"[3]. However it was not until 1923 and the redevelopment of the area that significant archeology was undertaken, which established the size and nature of the fort. Established around 81 AD, it occupied an area of about four acres enclosed by an outer defensive wall. Internally, buildings discovered included a praetorium (headquarters), barracks and a granary.[4] Major development precluded further significant excavation, and nothing is visible of the remains today: the remains lie beneath the houses of Gavinburn Gardens to the east, a large commercial building to the west and the A814 road to the north. 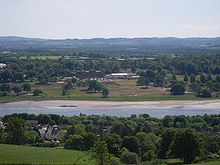 View looking south from the Kilpatrick Hills over the houses of Old Kilpatrick to the River Clyde, with Erskine Hospital clearly visible on the other side of the Clyde.

The parish system was introduced to Scotland in the 13th century. In about 1227, the church and lands of Kilpatrick were gifted to Paisley Abbey by Maldowen, Earl of Lennox. The parish remained under the supervision of the Abbey until the Reformation in 1560.[5]

At the Dissolution, the Church property fell into the possession of Lord Sempill. Eventually the lands were conferred on Claude Hamilton (a boy of ten), founder of the Abercorn family.[6] His son James Hamilton was created Lord Abercorn on 5 April 1603, then on 10 July 1606 he was made Earl of Abercorn and Lord of Paisley, Hamilton, Mountcastell and Kilpatrick.

Kilpatrick was split into two parishes - Old (Wester or West) and New Kilpatrick (also known as Easter or East) by an Act of Parliament on 16 February 1649.[7][8] This division is of note because this was a split of both the ecclesiastical and civil parishes and the wealth and stipend of the original parish was shared between the two new parishes. It was more common for new parishes to have "daughter" status, with wealth retained by the central, or cathedral church.[5]

Today it is close to the north end of the Erskine Bridge and is served by Kilpatrick railway station on the North Clyde Line.

There are Three public houses that are located within Old Kilpatrick,The Telstar, The Ettrick [10] and the Glen Lusset.

In 2011, the Telstar public house re-opened giving the village a total of three public houses.[11]

There used to be an annual fete but it died out in the 1990s due to poor attendance. Also at the north end of Old Kilpatrick is the local school. Gavinburn Primary School (which was bombed in WW2) where they also have many fetes annually.

The minerals edingtonite and thomsonite were first found at Old Kilpatrick.[12]