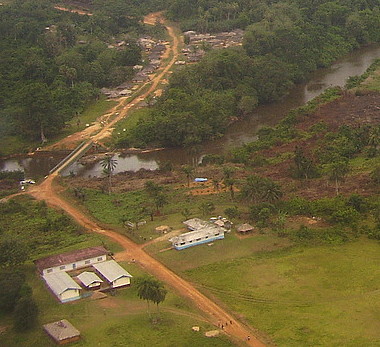 The modern jurisdiction of Barclayville was created by President Barclay in response to the last Kru Wars in the 1930s. As part of the effort to exert central government authority and diminish inter-tribal conflicts that resulted in devastation, four separate villages were combined into one township. Until the creation of Barclayville, the constituent villages of and , which are from rival chiefdoms, were in periodic conflict. The villages of Seetor, Kayeken and and their "" are on the northwest side of the Na river while is on the opposite bank across from Wakpekan. Despite the town's large size, most structures are traditional mud and stick homes and(as of mid 1980) few have running water or . Kplio (a dialect of Grebo) is the primary language of all Barclayvillians but English is the official language of instruction.

The regional is in Barclayville along with several public and private (Christian) schools for grades K-8. Many religious denominations have and/or missions in Barclayville including , , , and a variety of evangelical congregations, though most of the population also follows local animist practices. Prior to the much of the male adult population were on government payroll employed as teachers, employees of the courts, or serving as government officials or their staff. Nevertheless, upland farming is the primary occupation. Each village lays claim to large areas of land that extend several miles inland from the town upon which they do , rotating to a new section of land every year. Because of the distance from the farms to the villages it is common for the women and younger children to live on the farms during the growing season where they establish vegetable gardens and plant . Farming within Barclayville is limited by the presence of freely roaming and including , , and .

In June 2005 the UN Integrated Regional Information Regional Network reported that the roads leading to Barclayville had decayed and become overgrown by dense bush rendering them impassable.