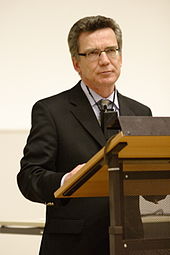 The Federal Ministry of Defence (Bundesministerium der Verteidigung, BMVg) is a top-level federal agency, headed by the Federal Minister of Defence as a member of the Cabinet of Germany. The ministry is headquartered at the Hardthöhe district in Bonn and has a second office in the Bendlerblock building in Berlin.

According to Article 65a of the German Constitution (Grundgesetz), the Federal Minister of Defence is Commander-in-chief of the Bundeswehr, the German armed forces, with around 253,430 active personnel. Article 115b decrees that in the state of defence, declared by the Bundestag with consent of the Bundesrat, the command passes to the Chancellor.

The ministry currently has ca. 3,730 employees. Of these, 3,230 work in Bonn while ca. 500 work in the Bendlerblock building in Berlin.

See also: Ministry of the Reichswehr

From the Unification of Germany in 1871 until the end of World War I, the German Empire did not have a national Ministry of War. Instead the larger German states (such as the kingdoms of Prussia, Bavaria, Saxony and Württemberg), insisting on their autonomy, each had an own war ministry. According to the military agreements the Prussian minister president Otto von Bismarck had forged with the South German states on the eve of the Franco-Prussian War of 1870/71, the major states were responsible also for the defence of the smaller states. However, the Imperial Navy from 1889 was overseen by a federal department, the Imperial Naval Office. 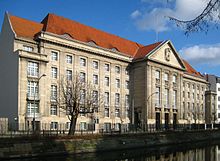 After the war and the German Revolution of 1918–19, the Weimar Constitution provided for a unified, national ministry of defence, which was created largely from the Prussian Ministry of War and the Imperial Naval Office. The Ministry of the Reichswehr was established in October 1919, and had its seat in the Bendlerblock building.

In the context of the Treaty of Versailles and the "Law for the Creation of a provisional Reichswehr" of March 1919, the Reichspräsident became the Commander-in-Chief of the armed forces, whilst the Reich Minister of Defence exercised military authority. Only in the Free State of Prussia did military authority remain with the State Minister of War. After the Weimar Constitution came into force, the remaining war ministries in the states of Bavaria, Saxony, Württemberg and Prussia were abolished and military authority was concentrated in the Reich Minister of Defence. Command was exercised respectively by the Chief of the Heeresleitung (Army Command) and the Chief of the Marineleitung (Navy Command, see Reichsmarine). In 1929 a third office was established: the Ministerial Office, whose Chief functioned as the political representative of the Minister. The role of the General Staff was filled by the Truppenamt.

In 1938, following the Blomberg-Fritsch Affair, Hitler himself exercised the functions of the Reich War Minister. The Wehrmachtsamt was turned into the Oberkommando der Wehrmacht (OKW; High Command of the Armed Forces), which formally existed until the end of World War II. The High Command was not a government ministry, but a military command, however.

After World War II, West Germany started with preparations for rearmament (Wiederbewaffnung) in 1950, as ordered by Chancellor Konrad Adenauer. After the outbreak of the Korean War, the United States called for a West German contribution to the defence of Western Europe (against the Soviet Union). Initially Gerhard Graf von Schwerin, a former Wehrmacht General, advised the Chancellor on these issues and led the preparations, but after Count Schwerin had talked to the press about his work, he was replaced by Theodor Blank, who was appointed as "Special Representative" of the Chancellor. As the rearmament plans met with harsh opposition by a wide circle within the West German population and contradicted the occupation statute, the government office responsible for the rearmament acted secretly, unofficially known as Amt Blank. By 1955, the number of employees had surpassed 1,300. On 7 June 1955 the office became the Ministry of Defence, or Bundesministerium für Verteidigung in German. The Bundeswehr was established and Germany joined the NATO the same year. In 1956, Germany reintroduced conscription, and the German military force quickly became the largest conventional military force in Western Europe. To confirm the ministry's importance, it was renamed Bundesministerium der Verteidigung on 30 December 1961, similar to the German names of the "classic" ministries of Finance, the Interior and Justice — though the federal minister is still denoted as Bundesminister für Verteidigung in Article 65a of the German Constitution. 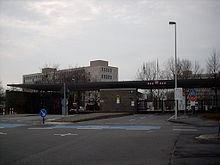 Entrance to the Hardthöhe, Bonn

Until 1960, the ministry had its seat in the Ermekeil barracks in Bonn. From 1960 onwards, it was moved to a new building complex at Hardthöhe. After German reunification, the Bendlerblock, former seat of its Weimar Republic predecessor, became the secondary seat of the ministry in 1993. The German military has become increasingly engaged in international operations since the early 1990s, and saw combat in the 1999 Kosovo War against Yugoslavia. Currently, Germany has a large deployment in Afghanistan and other deployments around the world.

As the Federal Minister of Defence also acts as High Commander of the German armed forces, the Ministry comprises military and civil departments: