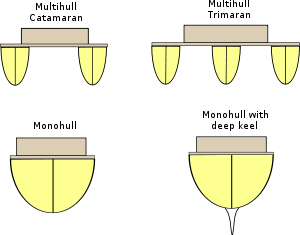 A multihull is a ship, vessel, craft or boat with more than one hull.

These types of boats have several advantages compared to single-hull boats. The increased distance between the center of gravity and the center of buoyancy provide higher stability compared to boats with a single hull. This allows multihulls to have narrower hulls and thus substantially less wave-forming resistance, which in turn results in greater speed without applying more effort.

In the case of boats under sail, stability serves to hold the vessel upright against the sideways force of the wind on the sails. This stability is provided in multihulls by the weight of the boat itself, in contrast to monohull sailcraft which typically use an underwater counterweight, a ballasted keel for this purpose, especially on larger sailboats. Multihull sailboats are typically much wider than the equivalent monohull, which allows them to carry no ballast, and the reduced weight also makes them faster than monohulls under equivalent conditions (see Nathanael Herreshoff's "Amaryllis", also 1988 America's Cup). It also means that multihulls need not sink or be abandoned if flooded, as opposed to ballasted monohulls who do indeed sink when flooded. The comfort of more onboard accommodation space and more level boats under sail offer substantially improved conditions for crew and passengers, which also contributes to the greatly increasing popularity of multihull sailboats during the past few decades.

There are also multihull powerboats, usually catamarans (never proas), both for racing and transportation. Speed, maneuverability, and space onboard are the main factors for choosing multihull design in powerboats.

There are three terms that describe the components of modern hull. The term vaka, like the related terms aka and ama, come from the Malay and Micronesian language group terms for parts of the outrigger canoe, and vaka can be roughly translated as canoe or main hull.[2]

Catamarans and trimarans share the same terminology, with a vaka, ama, and aka.[3]

Semantically, the catamaran is a pair of Vaka held together by Aka, whereas the trimaran is a central Vaka, with Ama on each side, attached by Aka.

The differences between monohulls and multihulls are due to a fundamental difference in their underlying design principles, which can even be traced back to the days of the dugout canoe.

Going to the basic round log; logs are generally unstable and they tend to roll over (capsize) without too much provocation. Hollowing out this log, into a dugout canoe, doesn't help this much, unless the hollowed out section penetrates below the log's center of buoyancy. Any load carried by the dugout then actually stabilizes the craft.

It is in finding the solution to this basic problem that highlights the difference in fundamental principles. Western European cultures expanded on this concept by filling the bottoms of their watercraft with rocks and other ballast. This can be traced back to the Romans, Phoenicians, Vikings, and even further, as a common fundamental concept. Even modern powered Ocean liners carry tons of ballast, in order to maintain their stability. Naval architects go to great lengths to assure that the center of gravity of their designs remains substantially below the metacenter. This can only be achieved by adding weight, or ballast. The low centre of gravity acts as a counterweight as the craft rotates around its centre of buoyancy, creating a restorative force as the craft deviates from its stable position.

The Polynesians approached the problem in a completely different way. They discovered that two round logs tied together don't roll, or capsize, as easily as a single log. With the addition of more logs, one creates a flat raft, which is extremely stable. To add buoyancy one simply hollows out the logs, at no sacrifice in stability. However, this requires a lot of work and it has other problems such as increased drag and weight. Europeans also went through the raft stage.

Separating the two logs by a pair of sticks, called Akas, one actually increases the stability manifold with no increase in weight and with a lot less overall work (no rocks to haul and no more trees to cut). Cover the intervening distance with a frame and platform creates a craft with almost the same level of stability of a raft and same performance. In addition to this, one can carry a tremendous amount of cargo without being bothered by having to expend a large part of cargo allowance in ballast.

From this basis, came the proa, catamaran, and trimaran, plus all the other various outriggers seen throughout the Pacific. Even the Chinese Junk was built on these concepts, being a derivative of the ancient cargo raft.

On one hand is a round log, with a long attachment, and a great weight at the end, hanging straight down from the log, into the water. Unfortunately, it cannot be parked too close to the shore because of the long arm at the bottom. On the other hand are two round logs, separated by a framework that carries a platform; two simple craft and two entirely, almost mutually alien, concepts of design and construction.

Balance is achieved in both designs. Essentially, both craft are stable. The single round log achieves this by being careful that the center of gravity remains well below the center of buoyancy at all times. This results in a narrow craft that has a deep draft and a fair amount of weight below the waterline. The other is a beamy craft, whose center of gravity may even be slightly above its center of buoyancy but, achieves its stability purely by the geometry of its wide stance on the water, to keep its rollcenter below its center of gravity. The difference is between balancing on one foot, using a heavy balance bar, verses standing in a wide two-footed stance.

(The following two statements are simplified and intended to highlight the fundamental difference between the two approaches.)

A monohull may be stabilized by making it substantially wider than it is tall. However, it is then called a raft, with all the drag problems that rafts have.

Multihulls are quite popular for racing, especially in Europe and Australia, and are somewhat popular for cruising in the Caribbean and South Pacific. They appear less frequently in the United States, although they are gradually becoming more popular, in Florida and the Caribbean. Until the 1980s most multihull sailboats (except for beach cats) were built either by their owners or by boat builders on a semi-custom basis. Since then several companies have been successful selling mass-produced (by boat industry standards) boats.

There are many types of multihulls in different categories. Among the small sailing catamarans, also called beach catamarans, the most recognized racing classes are the Hobie Cat 16, Formula 18 cats, A-cats and the ex Olympic multihull class called Tornado and the recent popularity of the Weta trimaran (NZ).

Pure power catamarans are becoming a common sight in international charter fleets in the Caribbean and Mediterranean. A new breed of catamarans has also now started to take shape in the form of the mega or super catamaran. This definition is reserved for those catamarans over 60 feet in length. It usually takes one year to build these huge vessels and often a large amount of customization takes place at the request of the owner who commissions the vessel.

Larger boats include Corsair Marine (mid-sized trimarans), and Privilege (large, luxurious catamarans). The Seawind, Perry, Lightwave production catamarans from Australia, The largest manufacturer of large multihulls is Fontaine-Pajot in France (the much larger French trimarans of the ORMA racing circuit and round the world record attempts are included in this total).

In the powerboat part of the multihull spectrum we find a range of boats from small single pilot Formula 1 power boat series to the large multi-engined or even gas turbined power boats that are used in the off-shore powerboat racing series and that are piloted by 2 to 4 pilots.

Multihull Designers that have made their mark and are considered the pioneers of multihull design and the ones that have made multihulls so popular today are: James Wharram (UK), Derek Kelsall (UK), Loch Crowther (Aust), Hedly Nicol (Aust), Malcolm Tennant (NZ), Jim Brown (USA), Arthur Piver (USA), Chris White (US), Ian Farrier (NZ). There are a number of more recent multihull designers who have created a range of designs popular because of the vessels' proven abilities.

Since N. G. Herreshoff, in 1877, many have always[clarification needed] been convinced about the superiority of multihulls. In 1978, 101 years after catamarans like Amaryllis were banned from any and all forms of yacht racing[4] history was to prove them right. Starting with the victory of the little trimaran Olympus photo, skippered by Mike Birch in the first Route du Rhum. Light and slender Olympus photo seemed to devour the sea, running away from all other types of boats. No great open ocean race would be won by a monohull, ever again. In addition, winning times have dropped by 70%, since 1978, from Olympus photo's 23d 6h 58'35" to Gitana 11's 7d 17h 19'6", in 2006.