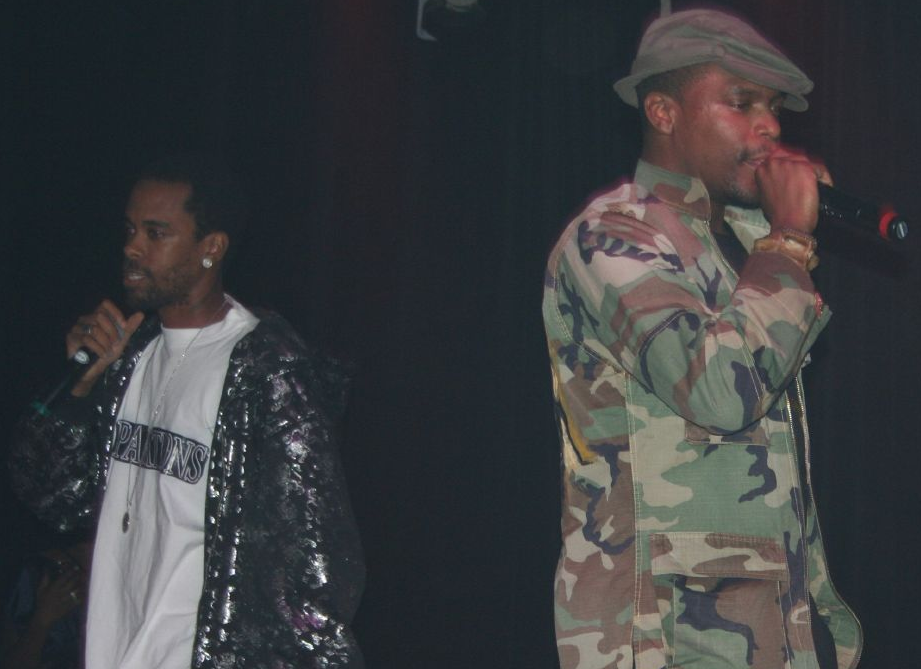 Dead prez is an underground duo comprised of and M-1. They are known for their confrontational style combined with and lyrics. These lyrics tend to focus on , , , , , education, prison systems, , against governmental repression, and corporate control over , especially hip-hop . Dead prez made their stance clear on their first album, declaring on the lead song, "I'm a African" that the group is "somewhere between and P.E."

In 1990, M-1 headed to to attend FAMU () where he and stic.man met and connected due to their mutual love of music and similar political ideology. "I was soaking up the as a whole," M-1 remembers. "I learned about their lives and it helped mold me."Fact|date=December 2007

"I realized there's a struggle already going on, and I have to try to help ride it out," interjects stic.man. M-1's quest for insight led him to join the (InPDUM) in for three years while stic.man remained behind in Florida and started getting into trouble. Burned out by the arduous labor of Uhuru, M-1 decided it was time to focus on music and stic.man agreed.

Dead prez transcribed the political education they acquired into lyrical . 's discovered them in and helped them sign a deal with . But being new on a famous label like Loud (home to the and ) was not easy. Although dead prez was not always Loud's top priority, they built a fan base around their over-the-top performances (they've been known to ignite and toss into the audiences, declaring that they must eat healthy).

The duo's debut album was 2000's "", which featured a major hit with the song "Hip Hop" from the year before. The song persists today as an anthem among HipHoppers around the world. The album was critically well-received, and included intense political diatribes featuring prominent black activist , as well as "Animal in Man" - a retelling of 's "". The instrumental version of their song "Hip Hop" was used as Dave Chappelle's entrance music for his show on Comedy Central, and can be heard on every episode. The popular video game SKATE also features the song "Hip Hop" in their sound track. In 2001 they collaborated with , another politically active hip-hop outfit, to release "Get Up". In 2002, dead prez released the independent ', followed by the release of "Turn off the Radio: The Mixtape Vol. 2: Get Free or Die Tryin in 2003. Also in 2003, their song "Hell Yeah" was featured in the soundtrack. In 2004, finally released "". They were featured performers on the film , recorded in 2004 and released in 2006. In 2006, they and former collaborators, the , jointly released an album titled "". In 2006, M1 also recorded a solo album titled "Confidential". From the album, the song "'Til We Get There" was on the video game NBA Live 2007. In 2007, stic.man released his own solo album titled "Manhood" with Boss Up Inc. / Traffic records. M-1 appears with , of the politically charged Hip Hop group , on the track "Everything's Political" off the 2008 album . On the track, M-1 and ProfessorD.us trade verses in response to the question "why is your music always so political?".

In June 2006, the cable movie network Starz InBlack began airing an original documentary called dead prez: It's Bigger Than Hip Hop directed by . The hour-long documentary featured live footage and interviews with dead prez. It also featured interviews from , owner of Ankh Marketing and son of incarcerated Black Panther ; , son of Black Panther Chief of Staff and Spokesman ; Bay-area rapper and poet , and hip hop activist and radio personality Among the topics discussed in the documentary are the inadequacies of the public education system, minority entrepreneurship, and social revolution.

M1 stated, "we've never had the opportunity to express ourselves on this level of magnitude. Starz InBlack taking a chance on us lets us know that the work we are doing is not in vain. That our message is penetrating, it's getting through." [ [http://web.archive.org/web/20060525141459/http://www.frostillustrated.com/news/2006/0522/Arts_And_Entertainment/027.html The 'revolution will be televised' as Starz InBlack presents 'Dead Prez: It's Bigger Than Hip-Hop.] "Frost Illustrated." Retrieved through web archive on , .]

Immediately following a dead prez performance at on Valentine's Day 2008, a fight broke out and a campus police officer arrested a suspect for a misdemeanor assault. When the suspect was taken into custody, audience members had warned the band of the arrest. Still on stage, they reportedly encouraged the audience to "find out the officers badge number and pursue the arrest and do something about it". A crowd of roughly 200 people then surrounded the officer's car, demanding the police to let the suspect go. Eye witnesses claim that a majority of the estimated 200 people were bystanders watching the riot. An hour prior to the actual riot starting the campus officer had attempted to leave the scene and was verbally harassed by various individuals that were standing outside the venue. The officer that made the arrest felt threatened by the small crowd of angry fans and then called for back up. The officers that responded to the scene attempted to disperse the crowd and used pepper spray. Several bystanders were caught in the dispersed pepper spray. The Olympia deputies responded and removed the campus officer and her car and released the suspect after taking down his information.

When a Thurston County deputy's car wouldn't start, the crowd overturned it, broke out the windows and sprayed graffiti on it. The deputy's laptop computer and a radar gun were stolen. No weapons were removed from the vehicle. Three other patrol cars had graffiti on them, and suffered minimal damage. The riot was estimated to have caused up to $50,000 worth of damage. Multiple officers were assaulted with rocks, glass bottles and trash cans in response to the attack on the crowd. There were no serious injuries reported. [cite news |author=Pawloski, Jeremy |coauthors=Hill, Christian |title=Crowd destroys deputy's cruiser |url=http://www.theolympian.com/570/story/360206.html |work=The Olympian |date=2008-02-15 |accessdate=2008-02-16 ]