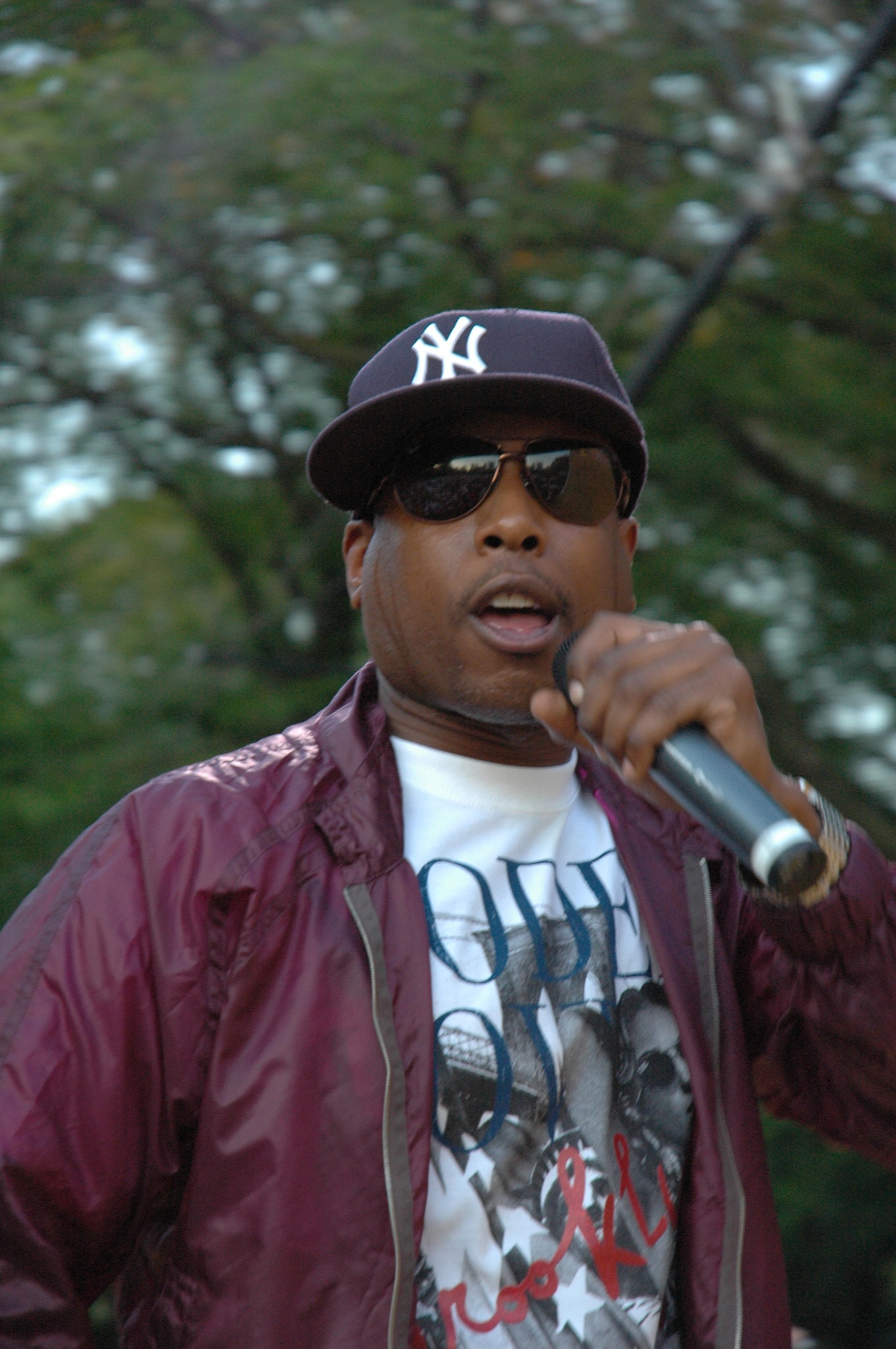 Talib Kweli Greene (born , ), better known as Talib Kweli, is an American from , . He is one of the best-known and critically, if not commercially, successful rappers in . His first name in Arabic means "student" or "seeker"; his middle name in Swahili means "true". Kweli first gained recognition through Black Star, a collaboration with fellow MC . Kweli has two children. Kweli has supported the "" since its inception, and performs at the show consistently every year.

Born in Brooklyn, Kweli grew up in a highly educated household. His mother is an English professor and his father a professor. As a youth, he was drawn to Afrocentric rappers, such as and other members of the and whom he had met in high school. Talib Kweli was a student at , a boarding school in Connecticut. He later studied experimental theater at (NYU). [ [http://www.musicianguide.com/biographies/1608003729/Talib-Kweli.html Talib Kweli Biography - Discography, Music, Lyrics, Album, CD, Career, Famous Works, and Awards ] ]

Kweli made his professional debut in 1997, with an appearance on "Doom," an album by Cincinnati, Ohio group, Mood (Main Flow, Donte, Jahson). In Cincinnati, Kweli also met and the two collaborated on a few well received underground recordings as . Shortly afterwards, upon returning to New York, he reconnected with Mos Def and formed Black Star. Kweli brought along Hi-Tek to produce their first and only album, 1998's "Mos Def and Talib Kweli Are Black Star". The album, released amidst a late '90s renaissance of conscious, Afrocentric hip hop, was immediately hailed by critics and achieved modest mainstream success. When Kweli and Mos Def parted ways shortly thereafter, Kweli and Hi-Tek continued their partnership on the 2000 album "Train of Thought", which was likewise met with critical acclaim, but modest sales.

Following "Train of Thought," Kweli and Hi-Tek split as well, and Kweli used his first truly solo debut to attempt a move toward a more mainstream sound. 2002's "Quality," accomplished this goal to some extent, featuring production by a host of different producers, including and . The album was met with wide spread critical acclaim and received some mainstream attention thanks to the West-produced single "Get By."

In 2004, Talib Kweli, along with Bob Moore's Amazing Mongrels, supported the on their "Challah At Your Boy World Tour," participated in a photo shoot by the amateur photographer Ben Fink Shaprio, and appeared in a few songs, including a live later featured on the video game "".

Kweli has used television appearances extensively to increase visibility, notably on 's "", and several performances on "Chappelle's Show" with long-time collaborator Mos Def; these performances were a product of host Chappelle's friendship with Kweli. Chappelle in turn participated in a number of skits on Kweli's albums "Train of Thought" and "Quality"- impersonating several people including . Kweli also had a guest spot on 's widely successful debut album "" on the track "Get 'Em High". West has produced some of Kweli's songs, including his biggest commercial hit "Get By". Kweli can be seen in a commercial for the NCAA's , rapping about the league's teams. [cite web|url=http://sportsillustrated.cnn.com/2006/writers/luke_winn/01/06/power.rankings/2.html |publisher=Sports Illustrated |title=Power Rankings: Michigan St. Spartans (11-2) |date=January 6, 2006] He also provided the voice of the protagonist in the graffiti-themed video game "", released in 2006. [cite news|title=Review:Graffiti game fresh and fun |url=http://www.cnn.com/2006/TECH/fun.games/02/24/getting.up/index.html |publisher=CNN |date=February 24, 2006]

In 2004, he released his second solo album and final Rawkus release, "". The album featured much more commercial production, and although Kweli's lyrics retained their socio-political content, he affected a somewhat harder persona. The album failed to cross over into the mainstream and suffered a critical backlash.

In 2005, Kweli released a Mixtape-CD off of his newly formed . The project was called "", a title which is considered likely a response to the criticism of "".

On "", Talib Kweli sampled 's "In Other Words" for his own song "Ms. Hill". In part 7 of Kweller's video podcast series "One Minute Pop Song," Kweller said he found Kweli's use of the song "a little fucked up" due to the fact that it was sampled without permission. [http://www.youtube.com/watch?v=SCX54oh0p2o Ben Kweller's One Minute Pop Song: Episode 7]

On , , Kweli released nine songs he recorded with acclaimed underground producer for free download in conjunction with the web site for , the label to which Madlib is signed. The album was entitled "", of which Talib later was quoted by XXL magazine as stating releasing the album was liberating to him; "The idea that I could put out an album like that: record it in my house, put it out for free and get that type of response."

For his newest release, Kweli formed his own record label, , and has recently signed acclaimed rapper and the group Strong Arm Steady. He also signed a new distribution deal with for Blacksmith Records. His latest solo album is called "Eardrum" and was released on , . It debuted at #2 on the . The first single was .

Kweli embarked on a national n tour in October, 2007. In 2007, a bootleg import CD containing rare and collaborative songs was released entitled "Focus". Recently Talib has joined MTV's hit show "" and filmed an episode in the small town of , as well as in New York City. He was the coach of Colin Colt, a young man who wanted to be made into a rap star.

On a New Year's blog Talib Kweli confirmed that he has 3 albums planned for 2008: "Prisoner of Conscious", a second Reflection Eternal album, and "Party Robot". In the blog, Kweli also confirmed that he will be working on new albums with , and Dion.

Kweli confirmed in a recent interview with "" magazine that the title of his next album will be "Prisoner of Conscious", a title derived from Talib's constant labeling as a "conscious rapper" and based on Nigerian reggae artist Majek Fashek's album "Prisoner of Conscience."Fact|date=March 2008

In March 2008, Kweli was featured on the and Buckshot track "Hold It Down".

Talib is currently recording a collaborative album titled "Party Robot" with singer under the group alias . They have released one song, "Industry Diary" from the upcoming project.