Owen Sound (Canada 2006 Census population 21,753; UA population 22,649; CA population 32,259), the county seat of Grey County, is a city in Southern (Southwestern) Ontario, Canada. Owen Sound is located at the mouths of the Pottawatomi and Sydenham Rivers on an inlet of Georgian Bay named Owen Sound Bay.[3]

The city of Owen Sound was originally known as Sydenham when it was first settled in 1841 by Charles Rankin. Prior to that the area had been inhabited by the Ojibway people. The city gained its current name in 1851 and was incorporated in 1857. For much of its history, Owen Sound was a major port city, known as the "Chicago of the North". Its location on Georgian Bay gave it access to the upper Great Lakes, and major rail lines moved cargo south from there. Port duties have declined dramatically since the opening of the St. Lawrence Seaway allowed shipping directly to the lower lakes and dramatically lowered costs compared to transshipment via Owen Sound. Being both the gateway to cottage country, and in the heart of Ontario's beef, apple and corn region, farming and tourism are still integral parts of the local economy.

At one time, Owen Sound's roaring seaport made it a rowdy town that was known to sailors as "Little Liverpool". Louis' Steakhouse, a popular upscale restaurant just outside of town, was opened by the Gavaris family in the 1980s and the historic building has changed hands several times since. It was originally a brothel where the madam would stand from its castle-like tower and watch the port for a ship to come in, and she would ready her prostitutes to excite the sailors. This reputation for vice and villainy, and the problems that came with it, caused the city to ban all drinking establishments for several decades. The city was "dry" until 1972. 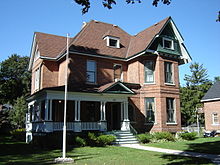 One of the city's most famous sons was World War I flying ace and Victoria Cross winner William Avery "Billy" Bishop, Canada's leading pilot in the war. Bishop is also one of the few to have tangled with the Red Baron and survived, forcing the German pilot to retreat in a damaged aircraft. The Billy Bishop Regional Airport in the nearby Municipality of Meaford was named after him. His modest gravesite can be visited in the city's Greenwood Cemetery by those willing to take the time to locate the stone. His boyhood home is now a museum dedicated to his life and to Canada's aviation history. The town was also the home of NHL Hall-of-Fame goaltender Harry Lumley and the artist Tom Thomson (buried in the nearby village of Leith). Surgeon Dr. Norman Bethune, an avowed communist and pioneer of public medicine who gained notoriety in his innovative medical work with the Chinese army during the Second Sino-Japanese War, is an alumnus of the Owen Sound Collegiate and Vocational Institute. Legendary hockey broadcaster Bill Hewitt was once sports director of the local AM radio station, CFOS. Tommy Holmes, another Victoria Cross winner, was also from Owen Sound, and the city's armoury bears his name.

Owen Sound is home of SummerFolk Festival, a popular folk festival that takes place annually in August. Summerfolk attracts over 4,000 people annually to the shores of Georgian Bay, specifically Kelso Beach Park located on the West shore of Owen Sound. The festival has run continuously since 1977 and is nationally renowned for its music and craft excellence. Many performers who have played there have gone on to great commercial success, such as Leahy, Valdy, The Rankins and Natalie MacMaster. Other more commercial Canadian talent has also graced the stages of summerfolk over the years with the likes of Gowan, Rik Emmett, Blue Rodeo and Bruce Cockburn. One of Summerfolk's most famous and revered performers was Stan Rogers. The Main stage features a memorial to Stan and is dedicated to his memory.

In 2005 Owen Sound became the National Communities in Bloom champion in the cities of 20,001–50,000 category in Canada for its beauty, natural landscape, and strong sense of community.

Owen Sound experiences a humid continental climate (Köppen climate classification Dfb)[4] that is moderated by Lake Huron. Winters are cold and very snowy, while summers are warm and humid. Precipitation is moderately high, with an annual average of 1100 mm.

The city's downtown is located in a deep valley in the Niagara Escarpment.

The City of Owen Sound was a 2004 Cultural Capital of Canada and is home to a number of cultural events and facilities. It is home to the Summerfolk Music and Crafts Festival, held every August, and the Festival of Northern Lights, a large Christmas lights festival with many displays along the Sydenham River, downtown, and in Harrison Park, held from November until January every Winter, as well as A Novel Marathon, a special event fund raiser for the Adult Literacy Program of the Owen Sound and North Grey Public Library.

In 2007 Owen Sound celebrated its 150th year since incorporation, with special events throughout the year highlighted by the 10-day Homecoming 2007 celebrations July 27 to August 5.

Theatrically, the city's 400-seat Roxy Theatre, owned and operated by the Owen Sound Little Theatre, is used for the city's professional live theatre performances, as well as some concerts. The Youth Theatre Coalition is also prevalent in the area. It is a youth theatre company run entirely by youth and for youth. The organization presents musical, theatrical, and concert type performances throughout the year.

The city is also home to a good number of museums and cultural attractions, including: 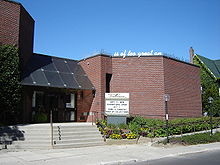 Owen Sound is home to a campus of Georgian College. The campus, which currently offers 11 full-time programs, is known worldwide for its Great Lakes International Marine Training Centre.[citation needed] The centre trains professionals already working in the marine industry and students enrolled in the Marine Navigation Technology program and the Marine Engineering Technology program. Owen Sound is also home to Owen Sound Collegiate and Vocational Institute, one of Canada's oldest schools having been founded in 1856.

Located at the junctions of Ontario Highways 6, 10, 21 and 26, the city serves as a gateway to the Bruce Peninsula.

Owen Sound Transit provides local bus service and specialized transportation for those unable to use the regular transit buses.

As home port of the Owen Sound Transportation Company Limited, the inner harbour is where the MS Chi-Cheemaun car ferry from Tobermory to South Baymouth is docked during the winter months.

The Parrish & Heimbecker Grain Terminal (Great Lakes Elevator Co Ltd) is located in the inner harbour. The original CPR grain elevators were destroyed by fire in 1911.

Owen Sound is the seat of Grey Bruce Health Services and has the largest hospital (Owen Sound Hospital) in the Grey County and Bruce County region.

The city is one of two (the other being Barrie) that are home to The Grey and Simcoe Foresters Primary Reserve Infantry regiment, as well as various cadet corps.

Some of the largest rainbow trout in the world have been caught in Owen Sound, and annual fishing derbies draw large participation from all over North America.

Southeast of the city are two popular Ontario ski resorts, Talisman and Beaver Valley. The city and area also have numerous snowmobile trails.

Owen Sound is the smallest city in Ontario (and one of the smallest in Canada) to host an OHL Major Junior Hockey Team, in the Owen Sound Attack who play at the Bayshore Community Centre arena.

Deborah Haswell (born 1960) is mayor of the city. A 13-year council veteran, she unseated popular incumbent Ruth Lovell Stanners by a mere 41 votes in the October, 2010, municipal election.[7] 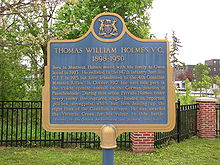 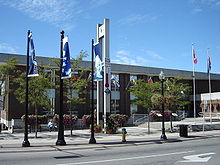 The sister city of Owen Sound is Miamisburg, Ohio.