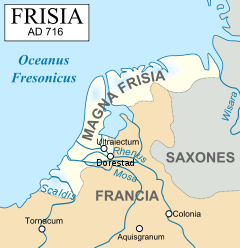 Dorestad and the region 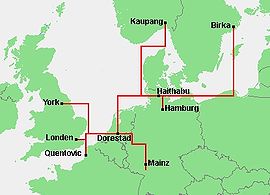 In the Early Middle Ages, Dorestad was the largest settlement (emporia) of northwestern Europe. It was a large, flourishing trading place, three kilometers long, situated where the rivers Rhine and Lek diverge southeast of Utrecht in the Netherlands near the modern town of Wijk bij Duurstede.[1][2] In Roman times a Roman fortress was built there that was still in use during the existence of Dorestad. Between 600 and around 719 Dorestad was often fought over between the Frisians and the Franks.

Dorestad was a North Sea trading centre between the 7th century and the middle of the 9th century,[2] primarily handling goods from the Middle Rhineland.[2][3] Wine was among the major products traded at Dorestad, likely from vineyards south of Mainz.[3]

The place was widely known because it had a mint. Around 640, the master of the mint in Dorestad was Madelinus. Later, sceattas and Carolingian coins were minted there.

Because of its success as a trading place, according to medieval Christian written sources[4] Dorestad drew the attention of Vikings, who frequently raided the place (834, 835, 836, 837, 844, 857 and 863). Vikings were involved in the first raid in 834. The raid of 857 was led by Rorik of Dorestad.[citation needed] Dorestad became the capital of the Viking Kingdom of Dorestad, which lasted from 850 to 885.

Dorestad declined around 850 and shrunk to a small agricultural site. However, in 896 king Zwentibold of Lotharingia refers to the rights and privileges of Dorestad in a document. The town's remains have been partially washed away by the river.