Un ballo in maschera (A Masked Ball), is an opera in three acts by Giuseppe Verdi with text by Antonio Somma. The libretto is loosely based on an 1833 play, Gustave III, by French playwright Eugène Scribe who wrote about the historical assassination of King Gustav III of Sweden. The subject was well known and had been used by other composers, including Daniel Auber, for his 1833 opera, Gustave III, ou Le bal masqué and later by Saverio Mercadante for his Il reggente in 1843.

In 1792, the King of Sweden, Gustav III, was killed, the result of a political conspiracy against him. He was shot while attending a masked ball and died 13 days later from his wounds. For the libretto, Scribe retained the names of some of the historical figures involved, the conspiracy, and the killing at the masked ball. The rest of the play - the characterizations, the romance, the fortune-telling, etc. - is Scribe’s invention and the opera is not historically accurate.

However, in order to become the Un ballo in maschera which we know today, Verdi's opera (and his libretto) was forced to undergo a series of transformations, caused by a combination of censorship regulations in both Naples and Rome, as well as the political situation in France in January 1858.

For a full account of the evolution of the opera which eventually became Un ballo in maschera, see Gustavo III (Verdi)

1857: From Gustavo III to Una vendetta in dominò

A commission by the Teatro San Carlo in Naples in early 1857 led Verdi to begin to oversee the finalization of the libretto (also by Somma) for Re Lear with the aim of presenting the finished opera during the 1858 carnival season. When this proved to be impracticable, Verdi turned to the subject of King Gustav III's assassination as portrayed in Scribe and Auber's opera, albeit not an historically accurate narrative.

Somma took up the new challenge and a libretto known as Gustavo III was presented to the censors in Naples by late 1857. By November, Verdi informed Somma that objections had been raised and revisions demanded by the censors, the most significant of which was the refusal to allow the depiction of a monarch on the stage - and especially the monarch's murder.[1] As had happened with Rigoletto, changes in characters' names and titles were proposed (the King of Sweden became the Duke of Pomerania; Ackerstrom became Count Renato) and the location was moved from Stockholm to Stettin.

Working together with Somma over Christmas, Verdi accommodated these changes. Somma was asked to change the names of the characters on the Gustave libretto while Verdi worked on completing sketches of the music. The name of the opera became Una vendetta in dominò.

By 9 January 1858, prior to setting out for Naples, Verdi wrote from his home the San Carlo that "the opera is done and even here I am working on the full score".[1] The composer then travelled to Naples and rehearsals of Un vendetta were about to begin when, on 14 January 1858, three Italians attempted to assassinate Emperor Napoleon III in Paris.

The imposition of still further, more stringent requirements by the censor [2] incurred Verdi's wrath. He broke his contract and was sued by the management of the Teatro San Carlo. This provoked him to lodge a counter-claim against the theater for damages and, eventually, the legal fight ended.

When the legal issues were resolved within a few months, Verdi was free to present the libretto and musical outline of Gustave III (which was basically Una vendetta with characters' names and locations changed)[3] to the Rome Opera. There, the censors demanded further changes. Removing the action from Europe, the location became Boston during the British colonial period and the leading character became Riccardo, the Count (or Earl) of Warwick.

At this point, the opera became Un ballo in maschera set in North America. It received its premiere performance at the Teatro Apollo in Rome on 17 February 1859 and was immediately successful.

This opera was first seen in New York its US premiere on 11 February 1861 and in the UK on 15 June of that year. In the 20th century, especially after a 1935 production in Copenhagen, many modern stagings have restored the original Swedish setting and characters´ names.[4] On 7 January 1955, Marian Anderson, singing the role of Ulrica, broke the "color barrier" at the Metropolitan Opera, becoming the first African-American artist ever to appear with that company.[5]

A "hypothetical reconstruction" of Gustavo III,[6] based on the unorchestrated original and much of Una vendetta "grafted" [6] onto Un ballo's score, occurred in a production by the Gothenburg Opera in Gothenburg, Sweden in 2002.[7]

The opera has become a staple of the repertoire and is now performed frequently.[8][9]

Scene 1: A public audience at Riccardo's palace, attended by his supporters, but also by his enemies who hope for his downfall

Riccardo (Gustavo) reviews the list of guests who will attend an upcoming masked ball. He is elated to see on the list the name of the woman he loves – Amelia, the wife of his friend and advisor, Renato (Count Anckarström). (Aria: La rivedrà nell'estasi / "With rapture I shall look upon her"). When Renato arrives, he tries to warn Riccardo about the growing conspiracy against him (aria: Alla vita che t'arride / "To the life with which you are favoured"), but Riccardo refuses to listen to his words.

Next, Riccardo is presented with a complaint against a fortune-teller named Ulrica (Madame Arvidson), accused of witchcraft. A magistrate calls for her banishment, but Oscar the page defends her (Aria: Volta la terrea / "That tense countenance"). Riccardo resolves to investigate for himself and tells the members of the court to disguise themselves and to meet him at Ulrica's lodging later that day.

Ulrica summons her magical powers: Re dell'abisso, affrettati / "King of the abyss make haste". Disguised as a fisherman, Riccardo arrives before the others. He makes the fortune of a sailor named Silvano come true by spiriting a document of promotion into his pouch, convincing the crowd of the truth of Ulrica's powers. When he realizes that Amelia is coming to see Ulrica, he hides and watches. Alone with Ulrica, Amelia confesses that she is tormented by her love for Riccardo, and asks for a means to bring peace to her heart. Ulrica tells her to gather a certain herb with magical powers; Riccardo resolves to be there when she does so. Amelia leaves.

Now Riccardo presents himself again, along with all of the courtiers, and asks to have his fortune told. (Aria: Di' tu se fedele / "Say whether the sea Awaits me faithfully"). Ulrica reveals that he will be killed by the next man who shakes his hand. He laughingly dismisses her prophecy and offers his hand to the courtiers, who refuse to take it. Renato arrives and shakes Riccardo's hand in greeting. Riccardo's true identity is now revealed and he is acclaimed by the people. 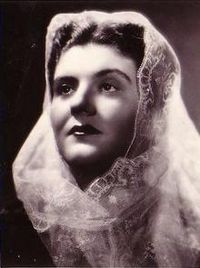 Maria Caniglia as Amelia in Un ballo in maschera.

On the outskirts of the town, at the gallows-place. Midnight

Amelia, conquering her fears, has come here alone to pick the herb of which Ulrica told her (Aria: Ma dall'arido stelo divulsa / " If through the arid stalks"). She is surprised by Riccardo, who has come to meet her. Now the two finally declare their love for each other.

Unexpectedly, Renato arrives, and Amelia covers her face with her veil before he can recognize her. Renato explains to Riccardo that the conspirators are pursuing him, and his life is in danger. Riccardo leaves, making Renato promise to escort the veiled woman safely back to town, not asking her identity. When the conspirators arrive, they confront Renato; in the struggle, Amelia's veil drops. Renato assumes that Amelia and Riccardo have been involved in an adulterous love affair. He asks the two leaders of the conspiracy, Samuel and Tom, to meet him the next day.

Renato has resolved to kill Amelia for the dishonor she has brought on him. She protests her innocence and begs to see her son one last time. (Aria: Morrò, ma prima in grazia / "I shall die - but one last wish"). Renato relents, and declares that it is Riccardo, not Amelia, who deserves to die (Aria: Eri tu che macchiavi quell'anima / "It was you who stained this soul").

Samuel (Count Ribbing) and Tom (Count Horn) arrive, and Renato asks to join their plot, pledging the life of his son as proof of his sincerity. They agree to draw lots to decide who will kill Riccardo. Amelia is forced to draw the winning name – Renato.

Oscar, the page, arrives with invitations to the masked ball; Samuel, Tom and Renato agree that this is where the assassination will take place.

Riccardo, torn between love and duty, has resolved to renounce his love for Amelia and send her and Renato back to England (Aria: Ma se m'è forza perderti / "But if I am forced to lose you").

At the ball, Renato tries to learn from Oscar what costume Riccardo is wearing. Oscar at first refuses to tell (Aria: Saper vorreste / "You want to know How he is dressed"), but finally answers: a black cloak and a red ribbon. Riccardo manages to identify Amelia and tells her of the decision he has made. As they say goodbye, Renato stabs Riccardo. The wounded Riccardo discloses that though he loved Amelia, she never broke her marriage vows. He pardons all the conspirators, bidding farewell to his friends and his country as he dies.