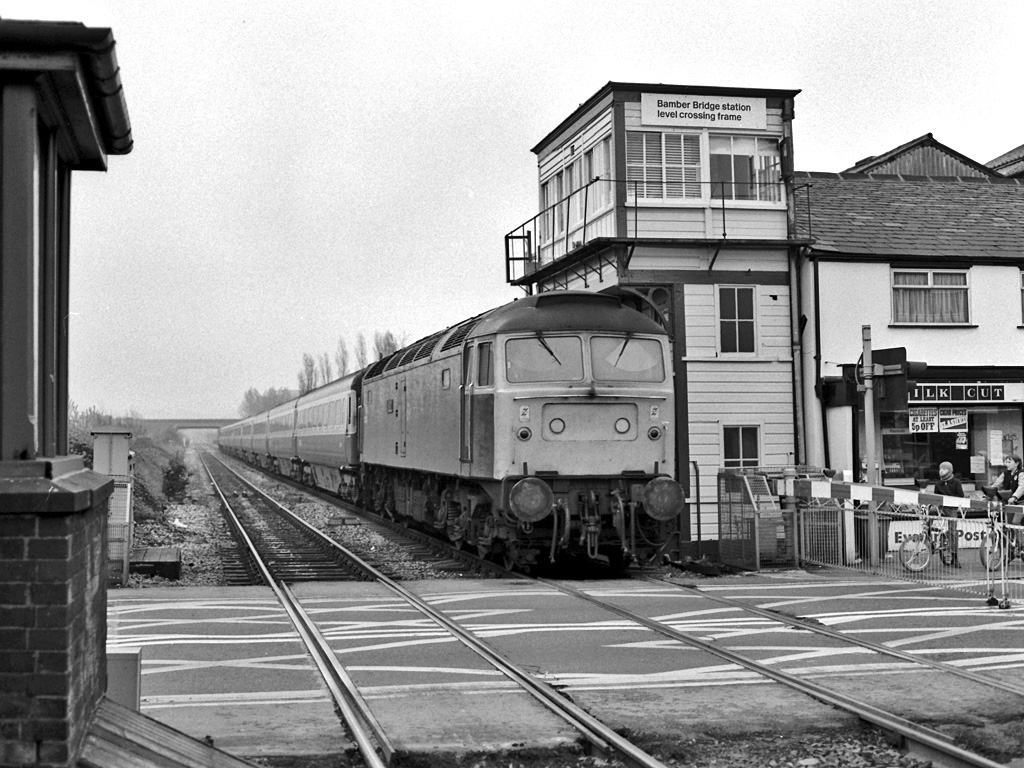 Bamber Bridge railway station serves the village of 6 km (4 miles) to the south of Preston on the A6 and M6 roads.

Its railway station, in common with Lostock Hall, was once much larger and used by many more trains than today. Opened in 1846 by the "Blackburn & Preston Railway", it became a junction four years later when the B&PR's successor the East Lancashire Railway opened a direct route to Preston that avoided the need to use the between Farington and Preston (and thus pay tolls to the NUR company). The ELR also built a connection to the west of Lostock Hall that put the village on the main line from Blackburn to Liverpool.

These newer lines all fell victim to BR economies in the aftermath of the - the direct line to Preston closing to passengers on (services henceforth reverting to the original line via Farington Curve Junction) and Liverpool trains ending on . The line was resignalled in 1973 and is now controlled by the power box at Preston, although the distinctive still remains to supervise three level crossings (one here locally and two further east by CCTV).

On the westbound platform, the station building built in 1846 survives but is no longer used as part of the station. The building has been disused recently but is now being converted into a drop-in centre for pensioners. [cite web | url=http://www.southribble.gov.uk/section.asp?catid=359&docid=1710 | title=Bamber Bridge railway gets a £305,000 facelift | date=2008-03-26 | accessdate=2008-05-09 ]

may not strictly be a "one-street village", but each train to pass through stops traffic; the cuts across the main road. Only trains en route to and from use Bamber Bridge. It has two platforms, but is not manned and has no departure screens.

Monday to Saturdays, there is an hourly service from Bamber Bridge towards Preston and Blackpool South, westbound and Blackburn, Burnley and Colne, eastbound. There is a two-hourly service in each direction on Sundays.