Kukri
For the genus of snakes having the common name khukuri snakes, see oligodon.

The kukri (Devanagari: खुकुरी) (originally spelled khukri or khukuri) is a curved Nepalese Knife, similar to the machete, used as both a tool and as a weapon. It is a traditional weapon for Nepalese people, and also a weapon of choice/side arm for all Nepalese including those serving in different armies around the world.

The cutting edge is inwardly curved in shape and is the icon of Nepal. It was, and in many cases still is, the basic and traditional utility knife of the Nepalese people. Very effective when used as a weapon, it is a symbolic weapon of the Nepalese Army, and of all Gurkha regiments throughout the world, signifying the courage and valor of the bearer in the battlefield. It is a part of the regimental weaponry and heraldry of the Royal Gurkha Rifles, and is used in many traditional rituals among different ethnic groups of Nepal, including one where the groom has to wear it during the wedding ceremony. It is known to many people as simply the "Gurkha blade" or "Gurkha knife".

The pronunciation "Kukri" is of western origin, the Nepalese people to whom this weapon belongs pronounce it as "Khukuri."

The blade's distinctive forward drop is intended to act as a weight on the end of the blade and make the kukri fall on the target faster and with more power. Although a popular legend states that a Gurkha "never sheathes his blade without first drawing blood" (this is said to be what the small, sharp notch on the blade near the handle is for: in case you wanted to draw your kukri for a non-militant purpose, and needed to draw blood before sheathing your knife. You could scrape your thumb on the notch, draw blood, and sheathe your knife without breaking tradition), the kukri is most commonly employed as a multi-use utility tool rather like a machete. The kukri also has a religious significance in the Nepalese form of the Hindu religion. During the annual Dashain festival, kukris are ceremonially blessed.

The kukri is effective as both a chopping and a slashing weapon. In combat, it is basically used in three different styles: stabbing with the point, slashing or chopping with the edge, and (rarely) throwing. Because the blade bends towards the opponent, the user need not angle the wrist, which makes the kukri more comfortable as a stabbing weapon than other straight-bladed knives. Its heavy blade enables the user to inflict deep wounds and to cut through muscle and bone. 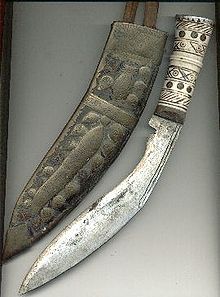 While most famed from use in the military, the kukri is most commonly used as a multipurpose tool, and is a very common agricultural and household implement in Nepal. Its use has varied from building, clearing, chopping firewood, and digging to cutting meat and vegetables, skinning animals, and opening tins. 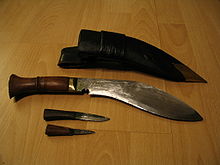 The Kukri is designed primarily for chopping. The shape varies a great deal from being quite straight to highly curved with angled or smooth spines. There are substantial variations in dimensions and blade thickness depending on intended tasks as well as the region of origin and Kami that produced it. As a general guide the spines vary from 5–10 mm at the handle, and can taper to 2 mm by the point while the blade lengths can vary from 26–38 cm for general use.

A Kukri designed for general purpose is commonly 40–45 cm (16–18 in) in overall length and weighs approximately 450–900 grams (1–2 lbs). Bigger examples are impractical for everyday use and are rarely found except in collections or as ceremonial weapons. Smaller ones are of more limited utility, but very easy to carry.

Another factor that affects its weight and balance is the construction of the blade. To reduce weight while keeping strength the blade might be hollow forged, or a fuller is created. Kukris are made with several different types of fuller including: tin chira (triple fuller), dui chira (double fuller), angkhola (single fuller), or basic non-tapered spines with a large beveled edge.

Kukri blades usually have a notch (kauda, kaudi, kaura, or cho) at the base of the blade. Various reasons are given for this, both practical and ceremonial: that it makes blood and sap drop off the blade rather than running onto the handle; that it delineates the end of the blade whilst sharpening; that it is a symbol representing a cow foot, or Shiva (Brigade of Gurkhas). The notch which also signifies teats of cow have another very strong implication. You may kill, cut or chop any animal by a khukuri but never a cow which is revered and worshipped as goddess by all Nepalese.

Handles are most often made of hardwood or water buffalo horn, but ivory, bone, and metal handles are also used. The handle quite often has a flared butt that allows better retention in draw cuts and chopping. Most handles have metal bolsters and butt plates which are generally made of brass or steel.

The traditional handle attachment in Nepal is the partial tang, although these days the stick tang is more popular. The full tang was mainly used on some military models, but has not caught on in Nepal itself.

The Kukri typically comes in either a decorated wooden scabbard or a leather wrapped scabbard. The scabbard usually holds a karda (auxiliary knife) and a chakmak (steel-flint striker) in addition. On many village Kukris and some older military Kukris, the scabbard also has a tinder pouch. 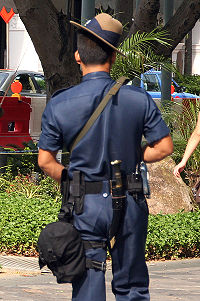 A Gurkha officer of the Gurkha Contingent, Singapore Police Force patrols around Raffles City during the 117th IOC Session. He wears the distinctively tilted Hat Terrai Gurkha, and the kukri can be seen affixed to the back of his belt.

Traditionally the Kami and Biswakarma are the masters of inherited Kukri making art.[1]

The Kukri blade is forged from steel. Modern Kukri blades are often forged from leaf springs collected from recycled truck suspensions.[1] The tang of the blade usually extends all the way through to the end of the handle; the small portion of the tang that projects through the end of the handle is hammered flat to secure the blade. A Kukri blade has a hard, tempered edge and a softer spine. This enables it to maintain a sharp edge, yet tolerate impacts. They are also balanced so that they will rest in a vertical position if supported on a fulcrum, such as a finger.

Traditional Kukris usually have handles made from hardwood or water buffalo horn. These handles are often fastened with a kind of tree sap called laha (also known as "Himalayan epoxy"). With a wood or horn handle, the tang may be heated and burned into the handle to ensure a tight fit, since only the section of handle which touches the blade is burned away. In more modern Kukris, handles of cast aluminum or brass are press-fitted to the tang; as the hot metal cools it shrinks and hardens, locking onto the blade. Some Kukris (such as the ones made by contractors for the modern Indian Army) have a very wide tang with handle slabs fastened on by two or more rivets, commonly called a full tang (panawal) configuration.

Traditional profiling of the blade edge is performed by a two-man team; one man spins a grinding wheel forwards and backwards by means of a rope wound several times around an axle, while the sharpener applies the blade. The wheel is made by hand from fine river sand bound by laha, the same adhesive used to the affix the handle to the blade. Routine sharpening is traditionally accomplished by passing a chakmak (smaller, harder, unsharpened blade) over the edge in a manner similar to that used by Western chefs to steel their knives.

Khukuri sheaths are usually made of wood with a goatskin covering. The leatherwork is usually done by a sarki. Traditionally, the scabbard also holds two smaller tools called the karda and the chakmak. The karda is a small accessory blade used for many tasks. The chakmak is unsharpened and is used to burnish the blade. It can also be used to start a fire with flint. Attached to older style scabbards there is sometimes a pouch for carrying flint or dry tinder.

Kukris can be broadly classified into two types: Eastern and Western. The Eastern blades are usually regarded as the thinner and are often referred to as Sirupate (Siru Leaf). Western blades are generally more broad. Occasionally the Western style is called Budhuna (refers to a fish with a large head) or Baspate (Bamboo leaf) which refers to blades just outside of the normal Sirupate blade. Despite the classification of Eastern and Western, both styles of kukri appear to be used in all areas of Nepal.

Balbhadra Kunwar, Gurkha commander during the Battle of Nalapani (1814), part of the Gurkha War, armed with a kukri in his left hand.

It is a matter of debate whether the design came into Nepal from another country or who promoted it first. It may be indigenous to the Indian region, but similar designs were used in ancient Egypt, Iberia, and Greece.

One weapon of Iberian origin, the falcata, shows some similarity with the kukri, and the Greeks used similar weapons called the machaira and kopis. Alexander the Great's men used weapons of this type and may have spread it into India when Alexander moved into the Punjab.

The Greek kings in Afghanistan and India in later centuries who had relation with Mediterranean culture seem to have used tools similar to kukri, and possibly were promoters of it.

It is not documented if the Aryans had similar tools at that time.

Eurasian steppe people, the Turks, used a type of forward-curving sword called a yataghan between the mid-16th to late 19th centuries and looked similar to kukri.

The oldest known kukris are in the National Museum (Kathmandu) in Nepal, and belonged to Drabya Shah circa 1559. The kukri came to be known to the Western world when the East India Company came into conflict with the growing Gurkha Empire, culminating in the Gurkha War of 1814–1816.

All Gurkha troops are issued the kukri, and in modern times in the Brigade of Gurkhas, they receive training in its use. The kukri gained fame in the Gurkha War for its effectiveness. Its continued use through both World War I and World War II enhanced its reputation among both Allied troops and enemy forces. During the Second World War, the kukri was purchased and used by other British, Commonwealth, and U.S. troops training in India, including the Chindits and Merrill's Marauders. It was also standard issue for Canadian scouts and snipers in North-West Europe.[citation needed] The reputation of the Gurkha with his kukri carried on through Falklands War.

On September 2, 2010, Mr. Bishnu Shrestha, alone and armed only with a kukri, defeated 30 bandits who attacked a passenger train he was on in India, killing three bandits, wounding eight more and forcing the rest of the band to flee.