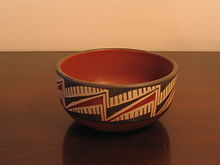 Replica of a Diaguita ceramic bowl from northern Chile.

The Diaguita, also called Diaguita-Calchaquí, are a group of South American indigenous peoples. The Diaguita culture developed between the 8th and 16th centuries in what are now the provinces of Salta, Catamarca, La Rioja and Tucumán in northwestern Argentina, and in the Atacama and Coquimbo regions of northern Chile.

Diaguita tribes were sometimes confederated, and sometimes at war against each other. When the Inca started extending their empire southwards in the 15th century, the Diaguita fiercely resisted the invasion.

They were unique at the time for their lack of a caste system, and lack of gold or other precious metals. They tended to live in clans. For the most part the men were monogamous, with chiefs possibly practicing bigamy.

They later fell to the Incas, though the Inca invasion was successfully stopped at the Córdoba mountains. Their surviving descendants contributed to the organized resistance to the Spaniards.

Diaguita peoples were one of the most advanced Pre-Columbian cultures in Argentina. They had sophisticated architectural and agricultural techniques, including irrigation, and are known for their ceramic art. They preferred the colours white, red and black. They mostly did not build large cities, but were sedentary farmers raising maize, pumpkins and beans, and herd animals such as llamas. They reflected the Andean culture they shared with the Inca. They worshipped the Sun, thunder an toto

Diaguita or Diaguita-Calchaquí is a generic name for a number of more or less closely related groups. Ethnographers have classified the group of peoples into three main divisions:

The Cacán language (or language group), spoken by Diaguitas and Calchaquíes, became extinct since the mid-17th century or beginning of 18th century. Its genetic classification remains unclear. The language was supposedly documented by the Jesuit Alonso de Bárcena, but the manuscript is lost.