Stellation is a process of constructing new polygons (in two dimensions), new polyhedra in three dimensions, or, in general, new polytopes in n dimensions. The process consists of extending elements such as edges or face planes, usually in a symmetrical way, until they meet each other again. The new figure is a stellation of the original.

In 1619 Kepler defined stellation for polygons and polyhedra, as the process of extending edges or faces until they meet to form a new polygon or polyhedron. He stellated the dodecahedron to obtain two of the regular star polyhedra (two of the Kepler-Poinsot polyhedra).

A regular star polygon is represented by its Schläfli symbol {n/m}, where n is the number of vertices, m is the step used in sequencing the edges around it, and m and n are co-prime (i.e. have no common divisor). Making m = 1 gives the convex {n}.

Some authors use the Schläfli symbol for such regular compounds. Others regard the symbol as indicating a single path which is wound m times around n/m vertex points, such that one edge is superimposed upon another and each vertex point is visited m times. In this case a modified symbol may be used for the compound, for example 2{3} for the hexagram and 2{5/2) for the regular compound of two pentagrams.

Like the heptagon, the octagon also has two octagrammic stellations, one, {8/3} being a star polygon, and the other, {8/2}, being the compound of two squares.

The face planes of a polyhedron divide space into many discrete cells. For a symmetrical polyhedron, these cells will fall into groups, or sets, of congruent cells - we say that the cells in such a congruent set are of the same type. A common method of finding stellations involves selecting one or more cell types.

This can lead to a huge number of possible forms, so further criteria are often imposed to reduce the set to those stellations that are significant and unique in some way.

A set of cells forming a closed layer around its core is called a shell. For a symmetrical polyhedron, a shell may be made up of one or more cell types.

Based on such ideas, several restrictive categories of interest have been identified.

We can also identify some other categories:

The Archimedean solids and their duals can also be stellated. Here we usually add the rule that all of the original face planes must be present in the stellation, i.e. we do not consider partial stellations. For example the cube is not considered a stellation of the cuboctahedron. There are:

Seventeen of the nonconvex uniform polyhedra are stellations of Archimedean solids.

In the book The fifty nine icosahedra, J.C.P. Miller proposed a set of rules for defining which stellation forms should be considered "properly significant and distinct".

These rules have been adapted for use with stellations of many other polyhedra. Under Miller's rules we find:

Many "Miller stellations" cannot be obtained directly by using Kepler's method. For example many have hollow centres where the original faces and edges of the core polyhedron are entirely missing: there is nothing left to be stellated. On the other hand, Kepler's method also yields stellations which are forbidden by Miller's rules since their cells are edge- or vertex-connected, even though their faces are single polygons. This discrepancy received no real attention until Inchbald (2002). 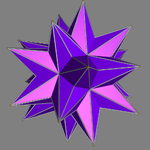 A stellation of the triakis icosahedron

To the right is an example of a stellation. This one is a stellation of a Catalan solid, the triakis icosahedron.

Other rules for stellation

Miller's rules by no means represent the "correct" way to enumerate stellations. They are based on combining parts within the stellation diagram in certain ways, and don't take into account the topology of the resulting faces. As such there are some quite reasonable stellations of the icosahedron that are not part of their list - one was identified by James Bridge in 1974, while some "Miller stellations" are questionable as to whether they should be regarded as stellations at all - one of the icosahedral set comprises several quite disconnected cells floating symmetrically in space.

As yet an alternative set of rules that takes this into account has not been fully developed. Most progress has been made based on the notion that stellation is the reciprocal process to facetting, whereby parts are removed from a polyhedron without creating any new vertices. For every stellation of some polyhedron, there is a dual facetting of the dual polyhedron, and vice versa. By studying facettings of the dual, we gain insights into the stellations of the original. Bridge found his new stellation of the icosahedron by studying the facettings of its dual, the dodecahedron.

Some polyhedronists take the view that stellation is a two-way process, such that any two polyhedra sharing the same face planes are stellations of each other. This is understandable if one is devising a general algorithm suitable for use in a computer program, but is otherwise not particularly helpful.

Many examples of stellations can be found in the list of Wenninger's stellation models.

The stellation process applies to higher dimensional polytopes as well. A stellation diagram of an n-polytope exists in an (n-1)-dimensional hyperplane of a given facet.

For example, in 4-space, the great grand stellated 120-cell is the final stellation of the Regular 4-polytope 120-cell.

The first systematic naming of stellated polyhedra was Cayley's naming of the regular star polyhedra (nowadays known as the Kepler-Poinsot polyhedra). This system was widely, but not always systematically, adopted for other polyhedra and higher polytopes.

John Conway devised a terminology for stellated polygons, polyhedra and polychora (Coxeter 1974). In this system the process of extending edges to create a new figure is called stellation, that of extending faces is called greatening and that of extending cells is called aggrandizement (this last does not apply to polyhedra). This allows a systematic use of words such as 'stellated', 'great, and 'grand' in devising names for the resulting figures. For example Conway proposed some minor variations to the names of the Kepler-Poinsot polyhedra.

Wenninger noticed that some polyhedra, such as the cube, do not have any finite stellations. The stellation cells are prisms which extend to infinity. The figure comprising these prisms is a stellation to infinity. By most definitions of a polyhedron, these stellations are not strictly polyhedra. They occur as dual polyhedra of the uniform hemipolyhedra.