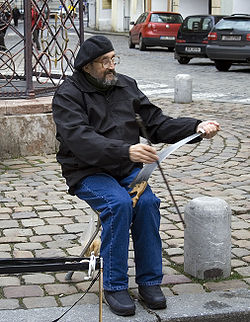 A musical saw, also called a singing saw, is the application of a hand saw as a musical instrument. The sound creates an ethereal tone, very similar to the theremin. The musical saw is classified as a friction idiophone with direct friction (131.22) under the Hornbostel-Sachs system of musical instrument classification. 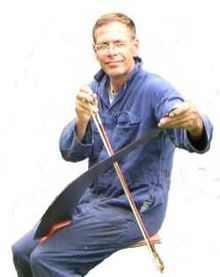 The saw is generally played seated with the handle squeezed between the legs, and the far end held with one hand. Some sawists play standing, either with the handle between the knees and the blade sticking out in front of them, or with the handle under the chin (like a violin). The saw is usually played with the serrated edge, or teeth facing the body, though some players face them away. Some saw players file down the teeth for added comfort. To sound a note, a sawist first bends the blade into an S-curve. The parts of the blade that are curved are damped from vibration, and do not sound. At the center of the S-curve a section of the blade remains relatively flat. This section, the "sweet spot", can vibrate across the width of the blade, producing a distinct pitch: the wider the section of blade, the lower the sound. Sound is usually created by drawing a bow across the back edge of the saw at the sweet spot, or sometimes by striking the sweet spot with a mallet. The sawist controls the pitch by adjusting the S-curve, making the sweet spot travel up the blade (toward a thinner width) for a higher pitch, or toward the handle for a lower pitch. Harmonics can be created by playing at varying distances on either side of the sweet spot. Sawists can add vibrato by shaking one of their legs or by wobbling the hand that holds the tip of the blade. Once a sound is produced, it will sustain for quite a while, and can be carried through several notes of a phrase.

Sawists often use standard wood-cutting saws, although special musical saws are also made. As compared with wood-cutting saws, the blades of musical saws are generally wider, for range, and longer, for finer control. They do not have set or sharpened teeth, and may have grain running parallel to the back edge of the saw, rather than parallel to the teeth. Some musical saws are made with thinner metal, to increase flexibility, while others are made thicker, for a richer tone, longer sustain, and stronger harmonics. A typical musical saw is 5" wide at the handle end and 1" wide at the tip. A saw will generally produce about 2 octaves regardless of length. A bass saw may be 6" at the handle and produce about 2½ octaves. Two-person saws, also called "misery whips", can also be played, though with less virtuosity, and they produce an octave or less of range.

Most sawists use cello or violin bows, using violin rosin, but some may use improvised home-made bows, such as a wooden dowel.

Musical saws have been produced for over a century, primarily in the United States, though there are some producers in other countries.

In the early 1900s, there were at least ten companies in the United States manufacturing musical saws.[citation needed] These saws ranged from the familiar steel variety to gold-plated masterpieces worth hundreds of dollars. However, with the start of World War II the demand for metals made the manufacture of saws too expensive[1] and many of these companies went out of business. In the year 2000 only three companies in the United States were making saws:

Outside the United States, there are 3 notable makers of musical saws:

This is a list of people notable for playing the musical saw.